The ground-breaking exhibition Tattoo: British Tattoo Art Revealed was only possible due to the passion and knowledge of individual collectors, and the objects they saved. Without them, all this material – and the social history it represents – would have been lost.

The exhibition features items from three of the most important private collections of tattoo material in Britain, loaned by collectors Jimmie Skuse, Paul “Rambo” Ramsbottom and Willy Robinson, providing a rare opportunity to display original artwork and artefacts not otherwise on public display. Here we introduce you to the owners of these vitally important collections.

I am Paul ‘Rambo’ Ramsbottom and I was born in 1959 close by Salford Docks near Manchester. I left school at 15 with a burning ambition to be part of the mysterious, and then uncommon, world of tattooing.

I got my first professional tattoo machines in October 1983 from ‘the classifieds’ in the local paper and opened my first tattoo parlour in 1984 in Manchester. The rent was £15 per week.

I moved to Shudehill in Manchester’s Northern Quarter in 1986, where I still work from today. I am Manchester’s longest registered tattoo artist.

When did your interest in tattoos begin?

I became interested in tattoos at the age of nine, when I noticed older guys at the local swimming baths with pictures on their arms. I was fascinated that their arms were wet yet the images remained intact. When I asked what they were I was told they were called tattoos. Cash Cooper did my first tattoo when I was 13. It was my nickname, ‘Rambo’.

What was the first object you acquired for your collection?

Back in 1985, the first items I acquired were two business cards – one for George Burchett, London and the other for Harry Lever, Blackpool. They were given to me by Derek Duckworth who was Harry Lever’s doorman in the 1960s. These cards would be the start of the world’s biggest tattoo museum.

I began my career in Germany, selling and repairing one armed bandits during the week, and travelling round to British Forces camps as a mobile disc-jockey at the weekends. I ran a pub, and founded the ‘Pleasure Dome Disco’ before I decided to open a tattoo shop in Gutersloh (Germany) with my friend Alan Dixon. Alan began to teach me to tattoo and I became a ‘filler-inner’ for Alan’s designs. A few months later we purchased a laser and became the first tattoo studio in the world to offer laser removal. We then went on to create a wholesale tattoo and piercing supply company. I am now following my dream of one day opening the biggest tattoo museum in the world.

When did your interest in tattoos begin?

I wish I had I really cool story to tell but the interest was just always there. It really peaked when I opened my first studio with Alan Dixon. From then it’s snowballed and the rollercoaster ride continues.

What was the first object you acquired for your collection?

Wow… we are going back in time now, over twenty years. I remember walking round a convention and spotting a Vince Ray oil painting of a tattooed male devil. As I was buying it, Vince said: ‘It’s one of a pair you know’. I said ‘I’ll take them’. ‘But the female hasn’t been painted yet’, said Vince. ‘That’s ok’, I said, ‘I can wait…’ 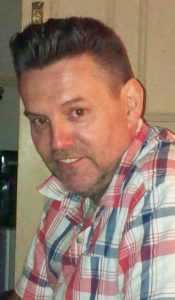 Jimmie Skuse is the scion of Bristol’s legendary Skuse family – son of Danny Skuse, nephew of Bill and Rusty, grandson of Les. Jimmie began tattooing more than 30 years ago, having picked up a machine at the tender age of 13. He was tutored by his father and still oversees the family business in Bristol.

Jimmie tirelessly keeps his family legacy alive, particularly through his stewardship of the Bristol Tattoo Club, the global organisation for the promotion of tattooing which was started by his grandfather.

Jimmie is also the custodian of one of the most important collections of British tattoo history in the world. He travels the country and the globe displaying and acquiring objects, publishing books, and caring for the history of this art.