Artist in residence | Q + A with Rob Johnsey

A man of many talents

Museum volunteer, sculptor, boatbuilder and now our first artist in residence Rob Johnsey on the inspiration for his sculptures

There have been many brilliant moments. Sailing Aileen, a St Mawes One Design, as part of the Falmouth Classics, was very special, as was getting involved with devising a design and technology programme for school children at the museum and carving two Viking figureheads for exhibitions. Most of all, however, I have enjoyed the stimulating comradeship with fellow volunteers as we have gone about completing a myriad of marine related tasks.

I graduated in Fine Art at Falmouth University in 2015

Most of my work for my degree was in copperplate printing although I did spend some time making sculptures on my foundation course. I visited many different art galleries and museums during my course and while I enjoyed the two dimensional work on the walls I was always mostly drawn to the sculptures in these places. I learnt to appreciate a wide range of sculptors such as Henry Moore, Barbara Hepworth, Anish Kapoor, Peter Randal-Page and many more. 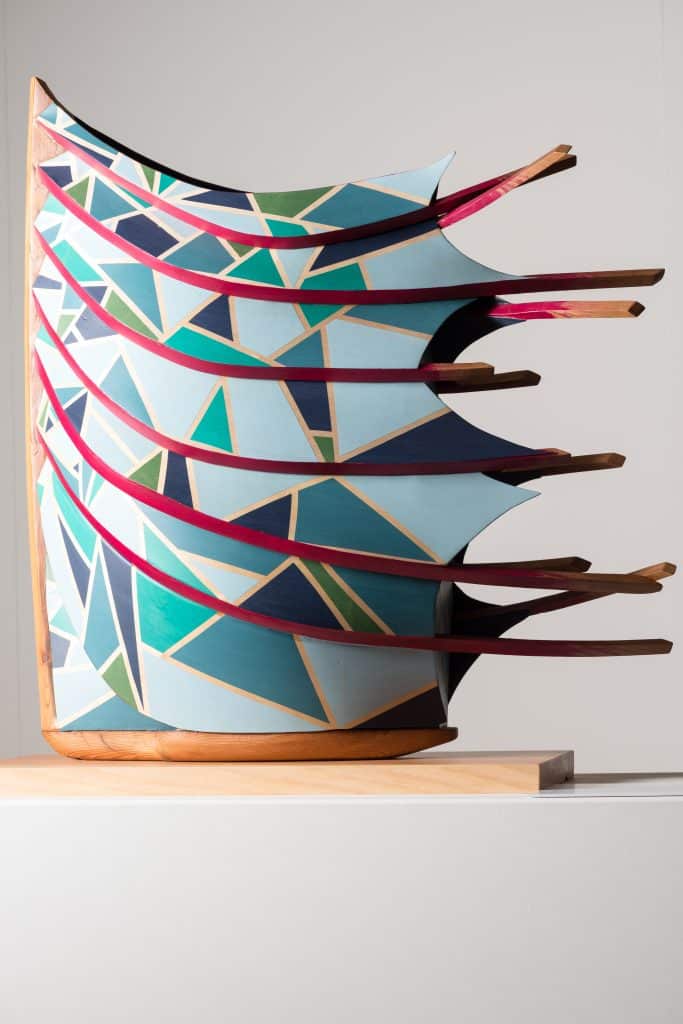 I had enjoyed the construction of the figurehead base so much that I wanted to do more. Thank you NMMC for having faith in me!

Almost all of my sculptures are made by fixing smaller pieces together to form a repetitive whole.
I am often influenced by organic forms such as seed pods or shells but for this exhibition I chose to be led by traditional wooden boat forms. Two of the sculptures, Keel and Transom are made from the keel and transom capping rail of an old classic yacht. The inspiration for Coracle is just round the corner from the exhibition space. The museum’s Shrewsbury coracle is already a piece of sculpture in its own right but as an artist I wanted to take this form even further into a spiral and starscape. Skeleton was the first image I thought of when I proposed the exhibition. I had seen many abandoned wooden boats rotting in muddy estuaries and creeks. These seemed to be just like skeletons of beached whales and that was my inspiration. Who could resist recreating the repeated vertebrae and ribs of both animal and boat?

This is an edited version of an article which features in the 1st edition of our annual journal Fathom available to buy in the museum shop or online.