Over 80 years ago Operation Aerial, co-ordinated by the Royal Navy,  evacuated allied troops and civilians by sea from the ports of western France. Here we take a look at Falmouth’s important role in this Operation. 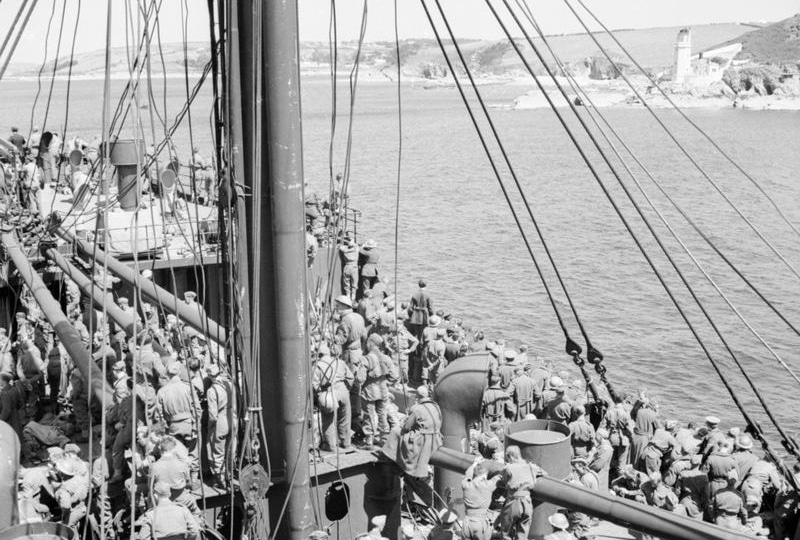 For ten days in June 1940 the port and town of Falmouth was caught up in the tremendous undertaking that was code named Operation Aerial. The Operation, co-ordinated by the Royal Navy, took place between 15th and 25th June to evacuate allied troops and civilians by sea from the ports of western France. A vast number of vessels were dispatched from and returned with evacuees to various English southern and western ports. As one of these ports, Falmouth, was heavily involved and over the duration of Operation Aerial more than 6,000 allied troops, other evacuees and refugees were landed there. A variety of important and interesting cargoes also arrived in the port including France’s supply of heavy water, diamonds from the Antwerp Diamond Bank and the Polish National Treasure.

A Second Evacuation from France

Operation Dynamo, which rescued the British Expeditionary Force and other allied soldiers from the beaches of Dunkirk, was complete by 4th June 1940. It was described by Winston Churchill as the ‘miracle of deliverance’ but deliverance was not over as many still in need of evacuation were left in France. They included British and allied troops, both combat and support units, RAF ground staff, medical personnel, embassy and consular staff and a considerable number of civilian evacuees and refugees.

Paris fell to the advancing German army on 12th June and two days later two thirds of France was occupied. Initially Headquarters in England had been reluctant to accept the need for a second evacuation from France after Dunkirk. However, when it became obvious that France intended to surrender, the War Cabinet in London made it a priority to extract forces and other personnel as quickly as possible. The first attempt was made at Le Havre but, hampered by fog and heavy shelling, was only partially successful and Operation Aerial was put into place for a large scale evacuation from ports from Cherbourg and St Malo to Brest, St Nazaire, La Pallice and other ports on the Gironde estuary.

Operation Aerial was a tremendous undertaking and there was a vast and complicated movement of vessels and personnel throughout the duration of the operation. A whole variety of vessels from destroyers and troop ships to passenger and cargo ships, ferries and tugs were dispatched from the southern English ports of Portsmouth, Southampton, Poole, Weymouth and Falmouth and others were requisitioned in the French ports. Vessels were overcrowded in the attempt to evacuate as many personnel as possible and many made the crossings more than once. Sometimes vessels sailed in convoy with a destroyer escort and sometimes they were unaccompanied and all were at the mercy of attack. Some attacks, such as those at St Nazaire, resulted in severe damage to transports such as SS Oronsay and to the sinking of HMT Lancastria which led to enormous loss of life.

In Falmouth the harbour and the bay became crowded with ships awaiting the orders to depart or returning from France with evacuees. These arrivals began as early as 16th June and continued building throughout the ensuing days. The scale and pace of the constant departures and arrivals are reflected in the entries of the Falmouth Harbour Master’s Journals, other official records and the accounts of Falmouth residents at the time.

Victor Angove, with his twin brother Bryan, was 12 years old, living in Sea View Cottages, Falmouth and recalled the arrival of the vessels on their return in his memoir “Challenges” written in 2001. “Boats of every description were coming across the Channel filled with service personnel and civilians escaping to freedom. The Falmouth Bay was filled with vessels. Mr Richmond (a neighbour) was still able to get fuel for his launch and he took Bryan and myself with his family to the Bay. We were amazed at the number of vessels, all their decks filled with people, desperate to be safe. The following day the town became crowded with soldiers, sailors and civilians. They were so tired and hungry that is one memory I will never forget.”

Ships were anchored in Falmouth Bay until they could disembark passengers at the harbour piers. In some cases recovered equipment had also been embarked alongside evacuees and needed to be unloaded. Officials and volunteers worked for many days to process and assist the influx of evacuees who were exhausted and hungry after their ordeals and needed help to be able to continue with their journeys.

Evelyn Radford, a well known figure in Falmouth, volunteered to help with evacuees at the town’s Princess Pavilion and kept a diary of the dramatic events. The entry for 20th June reads, “What a mix-up, civilians of all sorts, British subjects with remarkable English or none at all, French subjects speaking English perfectly, Malay seamen, a sprinkling of Spanish republican survivors, Polish Red Cross, Czech airmen, French and British all services, War Graves Commission, Imperial Airways, Standard Oil Co., Women’s Auxiliary drivers, a young woman with several children and twin babies of five weeks. They pour in steadily.”

All the resources of the town and the help of Falmouth residents was required and given. Public venues such as the Princess Pavilion were used as reception centres where evacuees could be taken for processing, assistance and welcome refreshment. Medical help was available and help for those with small children. Railway and other forms of transport were organised for evacuees to continue with their onward journeys and special arrangements were made to transfer some of the sensitive cargoes to various destinations. The official and volunteer responses were immediate and Falmouth rose to the challenge of the Operation and the demands it made.

Although Operation Aerial was of similar size to Operation Dynamo and the rescue from Dunkirk it has never achieved the same degree of prominence in the public consciousness despite its vast scale. This second evacuation rescued thousands of allied troops and servicemen, numerous civilian evacuees and refugees and much valuable cargo. The Operation deserves a far greater degree of recognition as does the port and town of Falmouth for the vital role played in the history of such an evacuation and rescue.