The Bartlett Library holds various collections and records maintained by the Library volunteers and the Bartlett Blog this month is one of a number of articles in our archives about visitors to Falmouth. In September 1828 this was a royal visitor, the young Queen of Portugal, who received an enthusiastic welcome in Falmouth.

In 1828 on 27th September the young Queen of Portugal arrived in Falmouth from Gibraltar on board the Brazilian warship Imperatriz. Lord Clinton and Sir William Freemantle, Gentlemen of the Bedchamber, were sent from London to receive her on behalf of King George IV and the local authorities were instructed to provide the nine-year-old Queen, Dona Maria and her entourage with all the appropriate civic and military honours.

In a letter sent to William Henry Fox Talbot from Carclew near Falmouth on 30th September his stepfather, Charles Fielding, described the arrival as having ‘created great enthusiasm amongst the Falmouthians. Her landing was a very pretty sight and the day most beautiful.’ 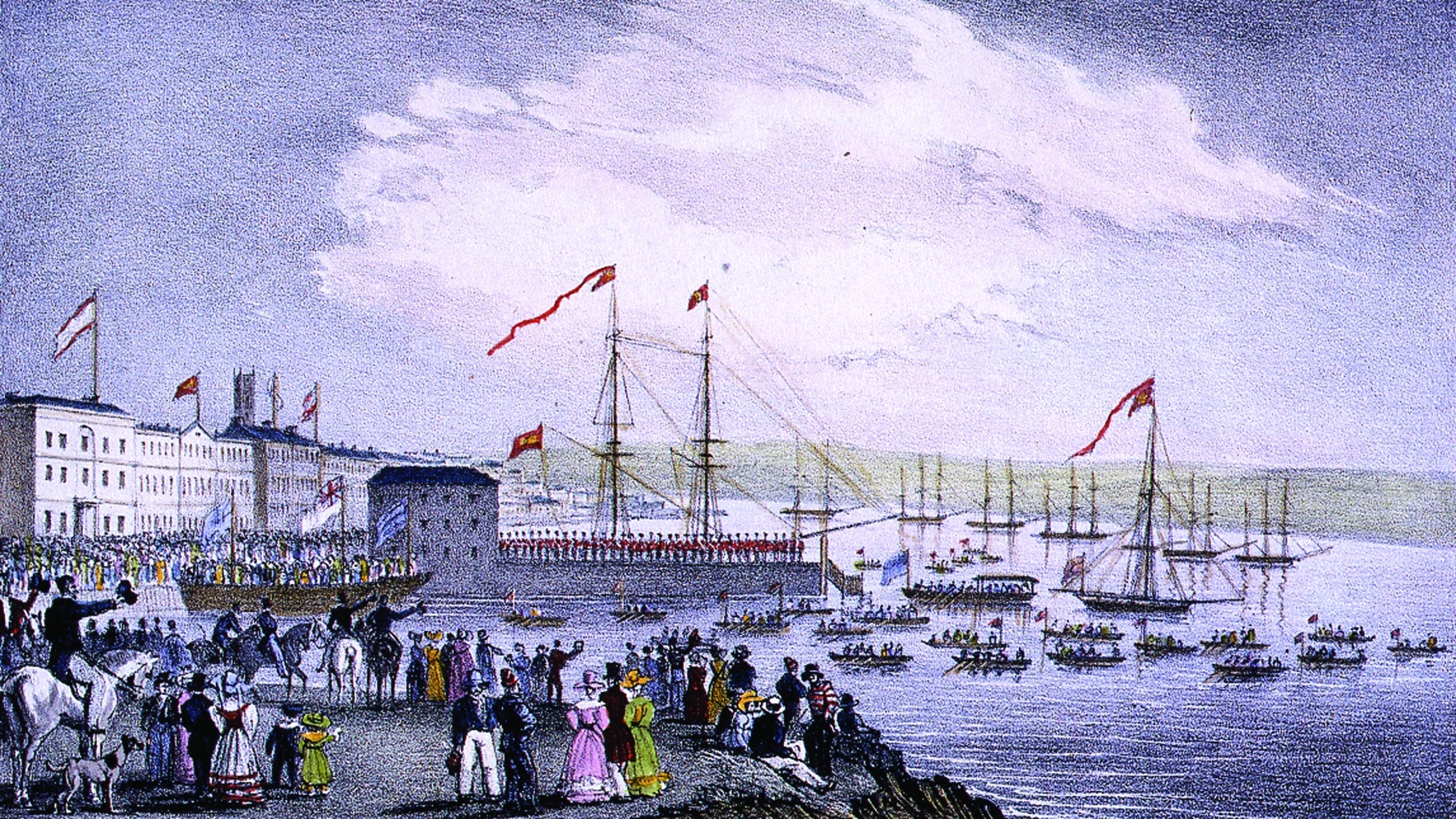 Dona Maria da Gloria was a member of the Brazilian Imperial family. She was born in Rio de Janeiro in 1819, the eldest child of Pedro I, The Liberator, Emperor of Brazil, and his first wife Archduchess Maria Leopoldina of Austria. Maria’s father was the son of King Joao VI of Portugal. The Portuguese Royal family were forced to flee Portugal in 1807 during the Napoleonic wars and had to take refuge in their colonial territory of Brazil. King Joao VI eventually returned to Portugal in April 1821, leaving Pedro, his eldest son and heir apparent, as Regent in Brazil. However, in September 1822 Pedro declared Brazil’s independence and was proclaimed Emperor in October. On the death of his father in 1826 Pedro briefly inherited the throne of Portugal. As he did not wish to reunite the two realms two months later he abdicated as King of Portugal in favour of his seven-year-old daughter Dona Maria da Gloria. His younger brother, Dom Miguel, accepted that the succession should pass to Dona Maria and in 1827 Miguel assumed the Regency. It was agreed that he would do so during her minority and that they should marry when she came of age.

Meanwhile Pedro decided to send Dona Maria to Europe to be placed in the care of her maternal grandfather in Vienna, the Austrian Emperor Francis. The young Queen and her party left Rio de Janeiro in May 1828 to cross the Atlantic and Mediterranean to Genoa on board the Brazilian frigate Imperatriz, accompanied by a British warship. In June, however, Miguel usurped the throne and declared himself King which ultimately led to civil war in Portugal between the supporters of Miguel and those liberals supporting the constitutional monarchy of Dona Maria

At the start of the conflict it seemed that Miguel’s supporters had largely achieved control and many of the liberal elite and their supporters escaped into exile elsewhere in Europe and in particular to England. On 5th July 1828 the Royal Cornwall Gazette reported the Duke of Marlborough packet had arrived in Falmouth with a number of refugees from the fighting in Portugal. Over the next few days five more vessels arrived carrying over 1020 refugees – ‘the streets of Falmouth are thronged with foreigners of every description.’ They were joined by over 350 refugees who had arrived in St Ives on the Dutch ship Enterprise on 29th August and a further 50 in St Ives from Madeira on 5th September on board the brig Jane of London.

News of the coup reached Queen Maria’s party when Imperatriz arrived in Gibraltar on 3rd September and they decided to alter their destination from Vienna and make for England. Despatches were sent to the government in England asking for a safe haven for the young Queen. King George gave express orders that the Queen of Portugal should be received with ‘all honours due to her rank’ and plans were made to receive her in Falmouth and for her subsequent journey to London.

The Queen and her party arrived in Falmouth from Gibraltar on 24th September and Imperatriz entered the harbour and raised the Portuguese standard. In response salutes were fired by the battery of Pendennis Castle and by HMS Astrea and the Packet ships all dressed with colours. The Queen spent the next three days on board Imperatriz receiving various representatives of the English, Brazilian and Portuguese governments, meeting many exiles and the civic authorities, including Alfred Fox, from the prominent Falmouth shipping firm, in his role as Brazilian Vice Consul. ‘The illustrious young stranger, the first Queen given by the New World to the Old was the subject of deep interest’ and during this time the frigate was constantly surrounded by boats containing crowds of people who had come to try and catch a glimpse of her.

At 11 o’clock on 27th September on a beautiful morning Queen Maria left the frigate and was rowed ashore in her twelve oared gilded barge to land at the Town Quay. A train of over 100 decorated boats followed the barge. Royal salutes were again fired from Pendennis and a guard of honour was provided by soldiers from the Castle and marines from HMS Astrea. Temporary stairs had been constructed for the landing covered in ‘red baize’ and the Queen was received on a platform at the top of the stairs by Lord Clinton, Sir William Freemantle, the Portuguese and Brazilian Ambassadors, Colonel Fenwick Governor of Pendennis Castle and Mr George Croker Fox. It was reported that the Queen was wearing a pink merino frock with a satin hat and shoes of the same colour and with a lace pelerine or cape descending almost to her feet. She was escorted to the royal carriage through a file of honorary police constables with around 30 small girls of about her own age all dressed in white strewing flowers in her path. She was then driven away through ‘an arch of evergreens and flags’ through the crowds a short way to the house of Mrs Elizabeth Fox, widow of Robert Were Fox and mother of Alfred Fox, which was selected ‘on account of its vicinity to the water.’ The Mayor, Corporation and other principal officials and inhabitants followed in procession.

At the house, the ladies of the Fox family and of others involved in the proceedings were lined up in the Entrance Hall to meet the Queen. After introductions were made and courtesies exchanged the Mayor and Corporation presented an address. The Queen then made an appearance at an upstairs window to the crowd outside, waving to them with her handkerchief and acknowledging their cheers. It was estimated that more than 10,000 people were in Falmouth for the event. After spending more time in holding a drawing room reception she dined before being taken with her ladies for a brief visit to the house and garden of G.C. Fox at Grove Hill House in Falmouth. Meanwhile others were entertained with refreshments at the house of Mrs Fox including all those involved in the reception party, ‘the flower girls not being forgotten’. The Queen returned to the house for a short while and again made an appearance before an enthusiastic crowd. Sometime after 2 o’clock she and her retinue left Falmouth in seven carriages for Truro, where she was to stay overnight at Pearce’s Hotel, and passed slowly through the town being greeted by the crowds and accompanied by a military escort.

The young Queen received the same sympathetic and enthusiastic reception everywhere she passed on her journey to London. She impressed those who met her with her lively intelligence and ’the affability of her manners, the sweet expression of her countenance, and the combined grace and dignity of her person’. A country residence was prepared for her at Laleham House near Staines. Here she had many official visitors, members of the British government and establishment such as the Duke of Wellington and the Earl of Aberdeen, representatives of the Brazilian and Portuguese governments, ambassadors and many of the Portuguese émigré community. She was received by the King who ‘showed towards the Queen the most striking marks of sympathy and regard’ and was welcomed by other members of the Royal family with whom she became a great favourite. Dona Maria was only a month older than Princess (later Queen) Victoria and the two were drawn together by their age and situations. During her stay in England at least two children’s balls were given in her honour and many other entertainments and visits were arranged on her behalf. The King also commissioned her portrait at a cost of 200 guineas to be painted for the Royal collection by the artist Sir Thomas Lawrence.

As the conflict in Portugal continued, however, Queen Maria’s position in England became politically more difficult and in 1829 it was decided that she should return to her father the Emperor Pedro in Brazil. The Queen of Portugal had returned to Brazil not yet having set foot in her kingdom. That time did not come until she was fourteen.

In 1831 she returned to Europe with her father after he had been forced to abdicate as Emperor of Brazil in favour of his son. Maria and her stepmother spent time in France and Pedro, now known as the Duke of Braganza, took up the fight to defeat Dom Miguel and regain the throne of Portugal. This end was achieved shortly before Pedro died in 1834 and Dona Maria da Gloria was able to enter Portugal and was pronounced as Queen.

She became the first constitutional sovereign of Portugal but her reign was ‘unquiet and revolutionary’ and the ensuing twenty years were a ‘protracted struggle’. Nevertheless on her early death in childbirth in November 1853 the country was tranquil and it was reported widely that ‘the Queen carries with her to the grave the general love and respect of her subjects’.

The Bartlett Blog is written and produced by the volunteers who staff The Bartlett Maritime Research Centre and Library of National Maritime Museum Cornwall. The Young Visitor was written by Linda Batchelor.