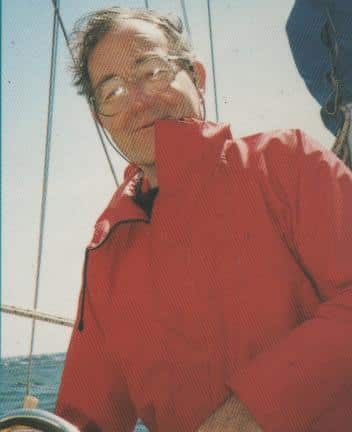 It is with great sadness that we announce the death of John Vernon Bartlett. Tony Pawlyn, long-standing Museum Trustee and Head of The Bartlett Maritime Research Centre as well as John’s good friend, describes John’s invaluable contribution to the Museum and in particular the Bartlett Library.

On 18th November we received a telephone call at the Bartlett from John Bartlett’s son, Mike, advising us that John had passed away at midday on Wednesday, November 17th at home. Knowing that he was dying, against all medical advice he had discharged himself from hospital, wishing to die at home with his family, in his bed, in the house he had built. This he achieved, and he passed away peacefully. John was 94. There will be an obituary in The Times and donations for The Bartlett – which they know John would like – it was his passion.

If you run a web search on his name you will discover a Wikipedia account of his career as a civil engineer, in which field he specialised in tunnelling, together with a footnote of his patronage of The Bartlett Maritime Research Centre and Library, in the National Maritime Museum Cornwall.

John’s interest and liberal patronage of our maritime library, stemmed from his friendship with the late Captain Gordon (George) Hogg, RN., and their Padstow links. I’m not sure when they first met, but they became firm friends, and in October 1990 attended their first annual Maritime History Conference, organised by Exeter University, held at Dartington Hall. And, when that conference was diverted to a university facility at Crossmead, in October 1994, many of the regular attendees so missed the ambience of Dartington, that an alternative Dartington Maritime History Group was instituted in 1995, holding its seminars in the spring of the year to avoid any conflict. John was a regular supporter of this group, attending regularly up until recent years, just before Covid put a stop to such events.

John was also a long-standing member of the Society for Nautical Research, and the South West Maritime History Society.

In October 1996, John’s magnificent volume, SHIPS OF NORTH CORNWALL, was published with justified acclaim at Padstow, setting a format which many other local historians would have liked to follow for their ports, but have yet to do so.

It was in this aspect of the new museum that John Bartlett’s library came to the fore, and in preparation a large selection of John’s maritime volumes were accommodated in a local warehouse and catalogued by a team of volunteers.

And here it may be appropriate to interject with an element of John’s lifelong focus on images of ships, and where to find them. In this respect John has compiled half a dozen manuscript indexes to pictures and photographs of ships, the final volume of which was only deposited with us a couple of weeks ago. Inevitably coupled to this almost obsession, were John’s periods of relaxation when on engineering business. He was closely involved in Japan and the boring of inter-island railway tunnels. Whenever his hosts asked him if there was anything he desired, he would frequently ask for a boat trip around their harbour. During these trips John took photographs of every ship in port – and we have the albums.

When the new National Maritime Museum Cornwall was opened in 2003, it was entirely fitting that the Library should be named after our founding benefactor. Now known as The Bartlett Maritime Research Centre and Library with 6,000 of John’s volumes forming the core of the collection. Staffed by a dedicated team of volunteers, throughout the 18 years of our existence John has continued to give his active and liberal support, with further donations of books, supplemented by those from many other supporters.

John will be hugely missed by us all, but his support of the Museum and The Bartlett Library will live on for many more years to come.