The Bartlett Library at National Maritime Museum Cornwall undertakes research and provides a research enquiry service for the public on a wide variety of topics. This month’s Blog, by Linda Batchelor, is the result of a research enquiry about the visit to Falmouth of the New Zealand Tunnelling Company during the First World War.

In February 1916 Falmouth in Cornwall was host to 450 men of the New Zealand Tunnelling Company of Engineers. The Tunnelling Company had left New Zealand on 18th December 1915 on board SS Ruapehu and docked in Plymouth on 3rd February 1916. The entire Company was then immediately entrained for Falmouth where they were to be encamped at the Hornworks at Pendennis Castle.

The New Zealand Herald reported that “The New Zealanders arrived at the railway station at about a quarter past four o’clock, where Colonel Powles, garrison commander, his staff, and the members of the 7th Battalion Royal Fusiliers Band had assembled, together with a large number of the general public. Although it rained heavily, it did not damp the spirits of the soldier “boys” who looked in the pink of condition, and who, apparently, appreciated in no small measure the warmth of the reception.”

The Scheme had been formally approved by British commanders in February 1915 to provide mining expertise for the Royal Engineers as the conflict of war moved into trench warfare. Tunnellers, nicknamed “Moles”, were recruited to dig trenches, dugouts and other underground accommodation but also crucially to mine under the enemy trenches to plant explosives and destroy them. They also developed listening devices to enable them to listen for the counter mining activities of the enemy. Later towards the end of the war tunnelling companies were also employed in reconstructing vital infrastructure such as railways and bridges. The work was dangerous and with constant risk.

Initially the British army raised nine tunnelling companies, with each company consisting of 5 officers and 269 sappers. The men were generally experienced miners and the officers often mining engineers, many graduates of the Camborne School of Mines in Cornwall.

As the need for more tunnellers increased, on 10th September 1915 the British government appealed to Canada, South Africa, Australia and New Zealand to raise tunnelling companies in the Dominions.

New Zealand was the first to agree on 17th September and began recruiting a unit of the Royal New Zealand Electrical and Mechanical Engineers to be paid three times the rates of other units. Some coal miners were enlisted but the company was made up mainly of gold miners, quarrymen and labourers from the railways and public works departments under the command of a 33 year old regular soldier Major J. E. Duigan. Many of the men were strong trade unionists and there were a number of members of the Red Federation of Labour and at least seventeen ex Secretaries of Labour Unions in the unit. The Company consisted of a total of 446 soldiers. After basic military training at Avondale Racecourse near Auckland the unit bonded well and was ready to depart for Europe on 18th December 1915.

The Company boarded the SS Ruapehu  in Auckland which took them on a voyage around Cape Horn and via Montevideo in Uruguay and Dakar in Senegal to the Western Approaches and Plymouth, where they docked on 3rd February 1916. The entire Company was then immediately entrained for Falmouth where they were to be encamped at the Hornworks at Pendennis Castle. 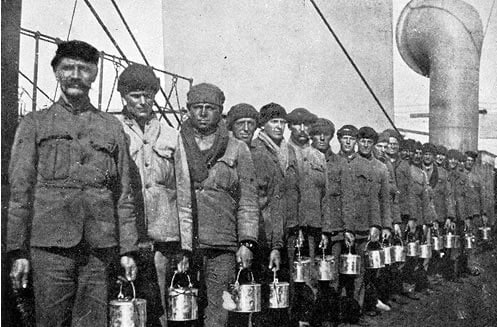 The New Zealand Tunnelling Company on board the SS Ruapehu en route to England on Christmas Day 1915.
NZ history.gov.nz

The Arrival in Falmouth

The Company marched through the town, headed by the Fusilier Band which had met them, to the Falmouth Docks. There, as the New Zealand Herald reported “they marched to a commodious shed at the docks which was transformed into a picturesque dining hall, for it was gaily decorated with flags representing Old England and the allies”.

The men were welcomed by the Mayor and Mayoress, various councillors and a large number of the public. In a rousing speech the Mayor declared that they were especially welcome as the first ship to leave with settlers for New Zealand had left from Falmouth and that they would uphold the splendid traditions of their country. After the speeches there was “a truely sumptuous repast ….served by all the youth and beauty of that ancient town.”

The Company remained in Falmouth for a month. During this time they were engaged in military training, were taught to fight with rifles and bayonets, were subject to route marches and were prepared for the tunnelling tasks they would undertake in France. It was damp and gloomy weather during most of their stay in the area and the training was hard but they were welcomed in the town and they made the most of their time there.

On 7th March 1916 the Company left for France. A unit of one officer and 69 men were left behind for a short time as reinforcements and they later transferred to the New Zealand depot at Hornchurch. In France they were the first New Zealand troops to arrive on the Western Front where they served exclusively until the end of the war. They were soon involved in constructing trenches and underground bunkers for signals and medical services, deep dugouts for the troop accommodation and particularly in mining operations, both offensive and defensive. 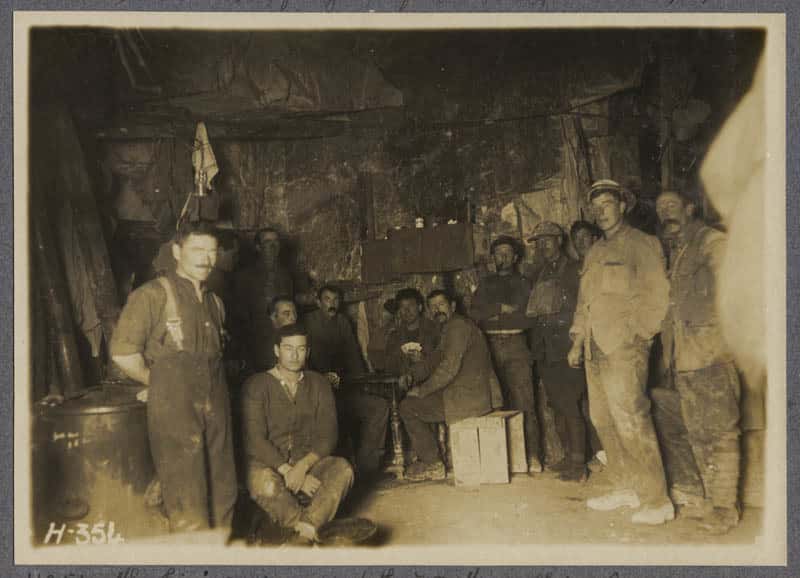 The unit was the smallest tunnelling company on the Western Front and they were famed throughout the Expeditionary Force as being the toughest of the tunnelling companies. It was reputed that they dug at three times the rate of the enemy’s mining crews. Mining and other operations proceeded seven days a week and for twenty four hours a day. The men worked in three shifts, each of eight hours with rest times of sixteen to twenty four hours between shifts. Each shift was constituted by an officer, a sergeant, a corporal, a lance corporal and fifteen sappers.

Initially after their arrival in Le Havre the unit began work providing underground mining operations and defence in the Labyrinth sector of the Western Front around Roclincourt-Chantecler. In November 1916 they were moved to Arras where they remained until July 1918. They began working with other tunnelling companies in preparation for what was the forthcoming Battle of Arras (9th April -16th May). The work involved connecting a network of existing underground quarries and caverns beneath Arras to provide a vast network of tunnels to give soldiers safe passage from Arras to the German front line. The New Zealanders were assisted in the excavations by sappers and infantrymen attached from other English and Scottish regiments and the Maori Pioneer Battalion. Although the Company camp was in Arras advanced billets were established underground at La Fosse Farm so that shifts could be carried on a continuous basis.

The underground work was on an enormous scale and conditions were both difficult and dangerous. The Tunnelling Companies involved named the excavated quarries, caverns and areas after familiar places in their own home countries. In the case of the New Zealanders with names of places in the North and South Islands such as Auckland, Wellington, Christchurch and Dunedin. Despite the demands of the project tremendous progress was made and excavation footage records were beaten on a daily basis. By 23rd December seven quarries had been connected and augmented with new tunnels and chambers and the New Zealand Tunnelling Company had dug over 14,000ft of tunnels to connect their sections of Ronville and Saint-Sauveur. On 4th January the cables were laid for electricity followed by direction signs and tramway lines. On completion the whole complex could accommodate  over 12,000 men with facilities such as lighting, running water, kitchens, latrines, a medical centre and a small underground power station.

After the battle the Company remained in Arras until July 1918 and then spent a month at Marieux on the Somme before being posted to Havrincourt. The Battle of Havrincourt began on 12th September as the Germans began their retreat to the Belgian border and on 28th September the Company became involved in building a bridge over the site of the Canal du Nord to allow for troop and supply movement. Although previously the Company expertise was in tunnelling and mining they were renowned for their work ethic and their ability to adapt their skills and for ingenuity. The 180 foot steel bridge was constructed under fire on site. It was then rolled across the canal cutting between Hermies and Havrincourt and was opened for traffic on 2nd October. 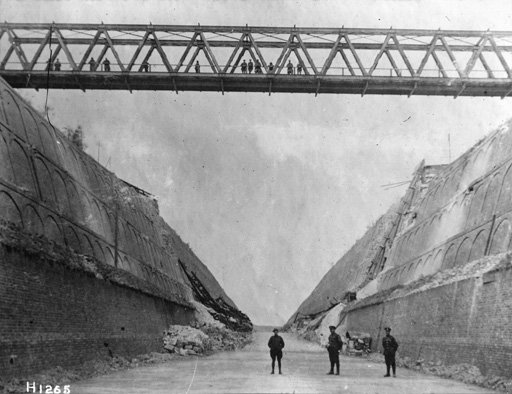 While no longer involved in mining and tunnelling activity the Company continued in the area with more bridge building and other building and reconstruction projects.

After the Armistice in 1918 the Company remained in France until they were all demobilized together on 22nd January 1919. This was an unusual procedure but their engineering and construction skills were urgently needed in New Zealand. They were taken back to camp in England at Larkhill on Salisbury Plain to await their voyage to New Zealand and by 14th March they were returning home on board the SS Ionic. After arriving in New Zealand on 24thApril 1919, the last unit to return, the Company was dissolved. There was no longer a need for the tunnelling companies as stand alone units in the Engineers in Britain or the Dominions but they had all made a vast contribution to the war effort and casualty rates were high. The New Zealand Company suffered forty one deaths and one hundred and fifty one men were injured during mining operations. Lieutenant General Haldane commander of the VI Corps during the Battle of Arras wrote to the Army Commanders to commend the Company for their excellent work and described them as ‘a first class organization’. They proved their abilities and bravery throughout their time on the Western Front. In 2008 a Museum, La Carriere Wellington, was opened in Arras to commemorate the work of tunnellers in the first World War, and named after the cavern excavated by the New Zealand Tunnelling Company. In 2014 the Arras Road Tunnel was opened in Wellington New Zealand and named in commemoration of the Company.

These specialist units are still remembered for their skills and courage throughout the conflict as is the New Zealand tunnellers short but memorable stay in Falmouth before they left for the trenches of World War 1.

The Bartlett Blog is written and produced by the volunteers who staff The Bartlett Maritime Research Centre and Library of National Maritime Museum Cornwall. New Zealand Moles in Falmouth was written by Linda Batchelor.