In December 2020 HMS Tamar was commissioned as a new patrol vessel for the Royal Navy. The River Class vessel is the fourth of five built for patrol duties around the globe assisting with protecting UK territorial waters, intercepting traffickers and smugglers and providing humanitarian assistance in the wake of a disaster and is distinct in a number of ways. It is designed as a ‘green’ vessel with catalytic converters which can reduce a ship’s nitrogen emissions by 75 – 90%. It is also the first time that a Royal Navy ship has been painted in ‘dazzle’ livery since 1945. In April 2021 during a maintenance programme carried out in Falmouth Docks, the Painting Department at A & P Falmouth used 200 litres of paint in shades in black, white and grey in a number of shapes to give HMS Tamar a dazzling treatment. 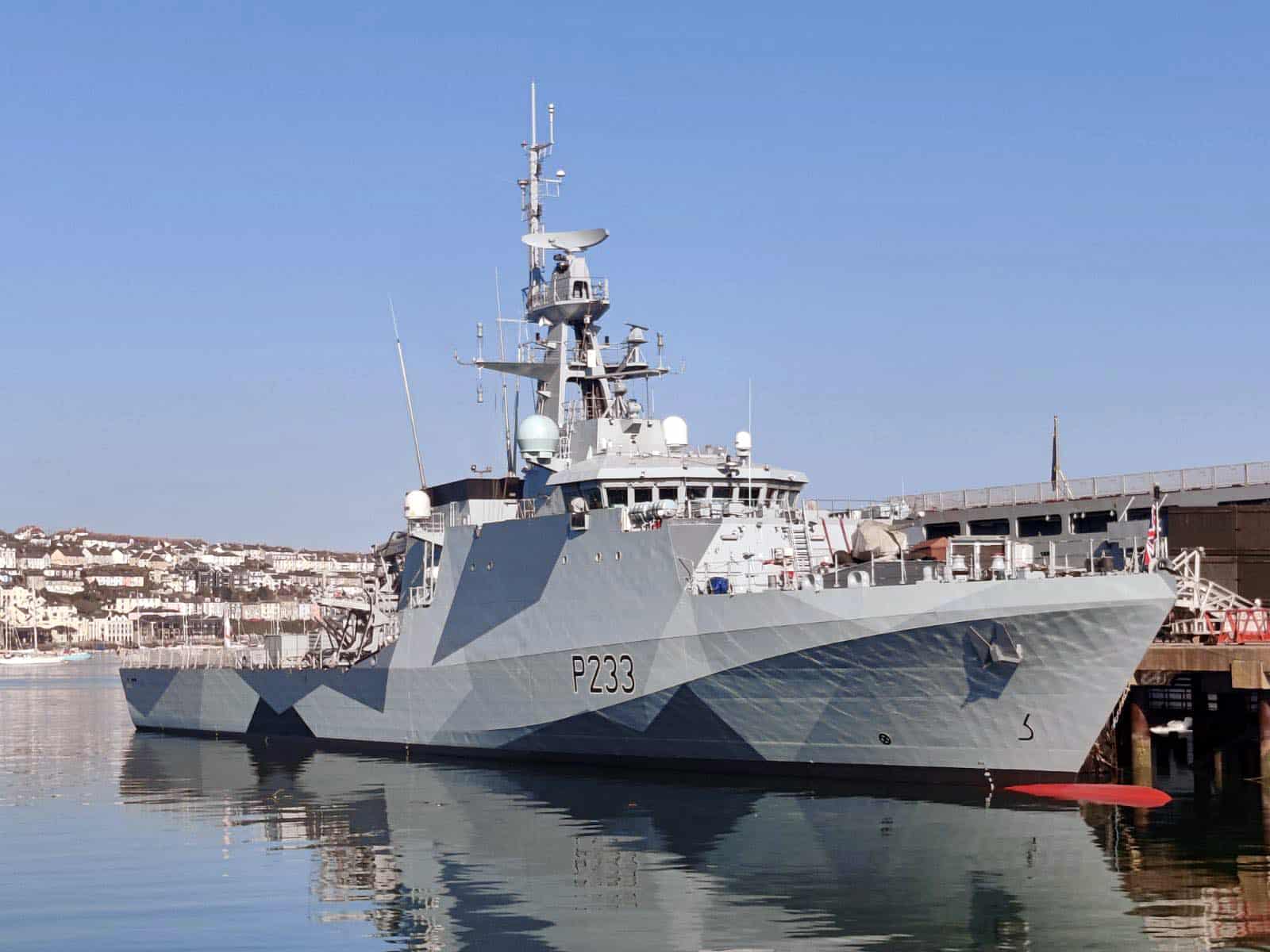 Military camouflage, of which dazzle is a form, was largely developed in the First World War and introduced new ways to deceive and confuse the enemy. Netting and canvas was used to disguise trenches, guns and emplacements and ammunition dumps and sometimes dummy buildings and flare paths to deceive attackers. By the time of the Second World War the scope and application of camouflage methods was extended enormously. British Camouflage Sections were set up employing numbers of artists, architects, scientists and modellers who devised a variety of methods of concealment for the battlefield and the home front and became important contributors to the war effort. Camouflage is an important military concept which continues to this day.

The first Section de Camouflage was established in France in 1915 under the direction of Lucien Guirand de Scevola, an artist and French infantry officer. The British followed the idea and established the British Camouflage Service in 1916 which worked mainly from establishments in France. The purpose of these services was to disguise installations and equipment on land and initially this was the main focus of development. The idea of applying camouflage in relation to shipping was more difficult due to the variable and changing conditions at sea and was a later development in the war. It was prompted by the rapid increase in German submarine warfare and the devastating effect on British naval power and the merchant fleet. The need for a way to deflect torpedo attacks from submarines became paramount. It was impossible to hide vessels at sea but the solution was that it was possible to cause distortion to perspective and to the form and size of ships by using paint and shapes to break up the view of a submariner aiming a torpedo via periscope observation. This concept of ‘dazzling’ was championed by Norman Wilkinson, the marine artist and a lieutenant in the Royal Naval Volunteer Reserve.

Norman Wilkinson was born in Cambridge in 1878. He became known as an illustrator and poster artist and as a marine artist in oil and watercolours. He studied at Portsmouth and Southsea School of Art, where he later taught, in St Ives with the river and coastal painter Louis Grier and studied figure painting in Paris. He began his career as an illustrator in 1898 with the London Illustrated News and was an established artist before signing up in the RNVR in 1915. Throughout his long career he showed widely and has work in many public collections in Britain. In both World Wars, although not an official war artist, he was important in camouflage development and painted and documented the war at sea.

In the first World War he was the pioneer and recognized as the inventor of dazzle camouflage. During the second World War he returned to the Services as a camoufleur. He was elected as an Honorary Air Commodore and chosen as the Inspector of Camouflage for the Air Ministry to advise and direct camouflage for the RAF especially for concealing airfields. In 1944 he presented 54 paintings of the ‘War at Sea’ to the nation. In 1948 he was appointed CBE. 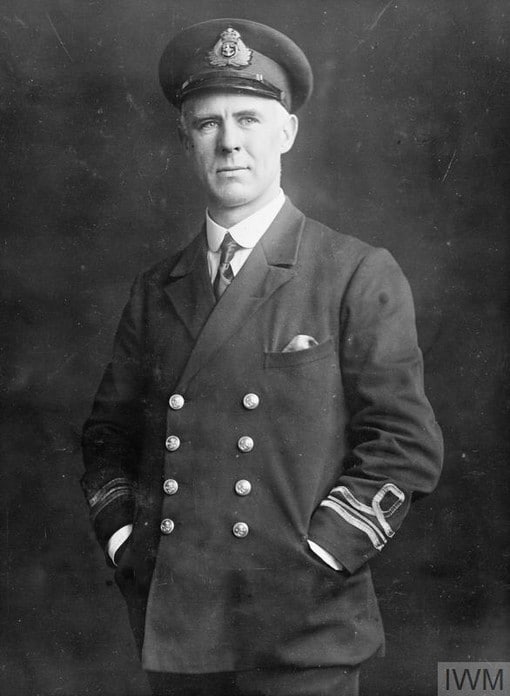 The purpose of dazzle camouflage is one of optical confusion using paint and pattern to confuse and mislead the enemy. Proposals involving aspects of this type of camouflage were put forward by the Scottish geologist John Graham Kerr and the US artist Abbot H Thayer but it was the scheme devised by Wilkinson that was eventually adopted by the Admiralty in 1917. In 1922 the Royal Commission on Awards to Inventors awarded Wilkinson with £2000 and acknowledged him as the creator of the naval dazzle camouflage scheme.

Wilkinson had served in the Dardenelles and then on minesweeping and submarine patrol in the English Channel. His ideas were therefore informed by both his artistic perception and his practical experience at sea. He later described the dazzle concept in his autobiography A Brush With Life as a ‘disguise of direction’. He believed that it was not possible to disguise a ship itself for low visibility with painted camouflage ‘but in such a way as to break up her form and thus confuse a submarine officer as to the course she was heading’. His dazzle scheme was specifically aimed at leading the enemy, viewing a ship from a submarine periscope, to take poor firing positions and thus to deflect or disrupt torpedo attacks. 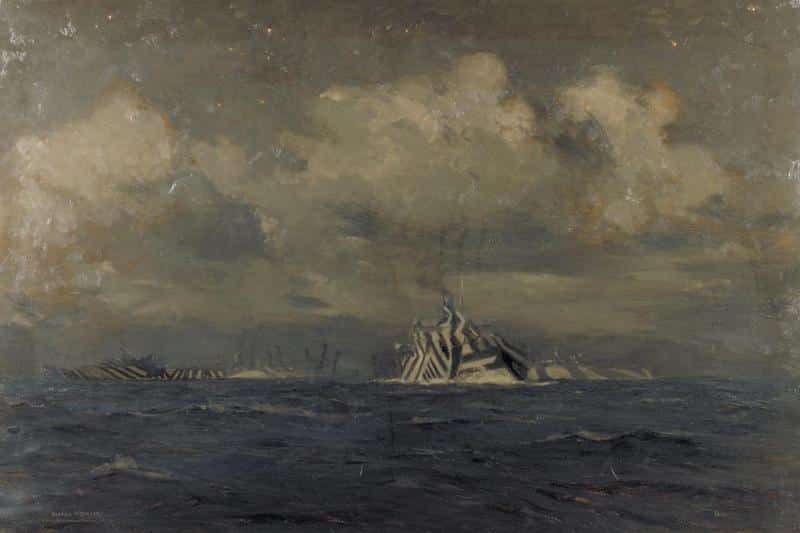 A Convoy of Dazzle Ships at Night. Norman Wilkinson, 1918. IWM.

Wilkinson was given the opportunity to demonstrate his dazzle concept on a ship, HMS Industry, at Devonport. The results persuaded the Admiralty of the value of the scheme and he was put in charge of the Naval Camouflage Unit which was set up in the basement of the Royal Academy in Burlington House in London. Initially the unit consisted of Wilkinson, a group of artists and modellers and 11 women art students as assistants. In time as the extent of the work expanded the numbers employed grew and Wilkinson approached the Academy and was given more space in which to work. King George V, with a naval background of his own, visited the establishment in 1917 and was impressed and endorsed the work being undertaken.

The unit devised dazzle schemes for individual ships which were each given a unique profile of colours and shapes. Wilkinson believed the most effective colours were light and dark greys, blues and green although other shades were sometimes used. The shapes and patterns adopted in the design were determined by the size and features of each ship. Miniature models of a ship were made, painted and tested on a turntable with periscope viewing before construction diagrams were produced for upscaling and application. A collection of these models is now kept by the Imperial War Museum.

Naval Dock Officers, were appointed to supervise the painting of the ships in ports around Britain, such as Southampton, Cardiff, Bristol and Liverpool. One such officer was the Vorticist artist Edward Wadsworth who worked in both Bristol and Liverpool and after the war produced a number of paintings of the dazzle work undertaken in the dockyards there.

By 1918 over 2,300 merchant ships and warships had been ‘dazzled’. Although the scheme’s effectiveness as a deterrent was never conclusive the Admiralty Committee on Dazzle Painting which reported in 1918 did conclude that it led to the greater confidence and morale amongst crews of dazzle ships and the practice could continue. After the war, however, for practical reasons such as cost and regularity of painting, dazzling was abandoned for naval ships which were painted in more sober livery.

Once again the Admiralty decided to create a Naval Camouflage Unit. The architect and designer Robert Godden was the Admiralty liaison officer and the unit was set up alongside the Civil Defence Camouflage Unit at Leamington Spa. It was staffed by three camouflage officers, eight technicians and a model maker. Norman Wilkinson returned to service but this time for the Air Ministry to work on camouflage for the RAF.

Dazzle camouflage from the First World War was no longer as appropriate with the development of radar and better range finding and was not reinstated for ships at this time. However, painting and disruptive patterns were still used to break up the outlines of ships and to reduce the factors making them targets from land, sea and increasingly the air. Models were made and tested in simulated conditions using a viewing tank. The colours used were mainly greys and blues with two special colours, Peter Scott Blue and Mountbatten Pink sometimes used on Royal Navy ships. As well as ships the unit dealt with tank and troop landing craft. This practice of wartime camouflage for ships ended in 1945.

Protection of shore establishments was also the responsibility of the Admiralty and this included naval ‘Starfish’ sites at various coastal targets. These were decoy lighting sites designed to draw bombing away from the target area. Falmouth with its port, docks and the railway was such a target and two decoys were installed some miles away at Nare Head to protect the town and the naval facilities. The decoys consisted of grids of muted lights or controlled fires to replicate military or urban areas such as dockyards or railways with their permitted illumination. The sites were constructed at a distance from the protected area with a concrete command bunker built into a hill or surrounded by an earth mound to disguise it from the air. They were manned by shifts of Petty Officers, at least two on duty day and night, who had the responsibility of operating and maintaining the lighting decoys.

The concept of dazzle painting of a ship has not disappeared entirely as the new livery of HMS Tamar demonstrates. It has also been given more artistic emphasis in recent years by various projects inspired by dazzle painting.

As part of the Biennal of the Liverpool Tate of June 2014 to December 2015 four vessels were painted with versions of livery as part of the commemorations of the First World War. The Tate and Merseyside Maritime Museum presented a joint commission to paint an historic pilot ship, Edmund Gardner, owned and conserved by the Museum. The ship was painted with a contemporary version of dazzle by the Venezuelean artist Carlos Cruz-Diez. Also in Liverpool, Snowdrop, the Liverpool Ferry was given the dazzle treatment to a design by Sir Peter Blake. Currently being serviced the ferry will be back on the River Mersey in early 2022. As part of the Edinburgh Art Festival Commissions Programme MV Fingal, berthed in Leith, was painted in dazzle livery to a design by Ciara Phillips, timed to coincide with the Battle of Jutland. On the Thames in London HMS President, which had served as a dazzle ship in 1918 under the original name of HMS Saxifrage, was given a design of dazzle in grey black, white and orange by Tobias Rehberger.

In Falmouth in May 2019 Fal River Cornwall launched the Fal River Dazzle Ferry. Local artist Kleiner Shames was commissioned to transform the Falmouth to St Mawes ferry May Queen, inspired by dazzle camouflage and the wartime history associated with the River Fal, into a floating work of art. Now the concept of dazzle livery has returned to modern naval ships with the painting of HMS Tamar in the dockyard at Falmouth. The Navy emphasises however that today the dazzle livery of HMS Tamar is less of military value and is intended more to give the ship a distinct identity. It is a link to the past with a contemporary application.

The Bartlett Blog is written and produced by the volunteers who staff The Bartlett Maritime Research Centre and Library of National Maritime Museum Cornwall. Dazzling Displays was written by Linda Batchelor.