The Flushing Ferry Disaster of 1899

When Tim Beattie started as a Library volunteer about five years ago he was asked to set about digitising the minutes of the Falmouth Harbour Committee. These are contained in some 25 large, heavy, leather-bound volumes containing the records of its weekly meetings carefully transcribed by the clerk to the Committee.

Much of what they reveal is, literally, everyday stuff, port arrivals, problems with the steamer, reports of stolen goods and disputes between ships’ masters and members of the crew but occasionally some exceptional event will stand out, such as a terrible storm, a murder, or a dramatic rescue which suddenly illuminates the life of Falmouth harbour and its people over 100 years ago. Using these records and reports from the local newspaper the ‘Falmouth Packet’ Tim highlights one such sad tale.

On 7th April 1899 a ferry on passage between Flushing Quay and Greenbank capsized in a squall and one of the passengers, eleven-year-old Ernest Drew, was drowned. This shocking event was widely reported in the local press. The Falmouth Packet stated that visitors at The Greenbank Hotel made a collection of nearly £5 for the rescuers who handed it to the mother of the boy. Hundreds attended the funeral, at which several of Ernest’s playmates acted as bearers and many were moved to tears.

Although there was no such thing at that time as the Marine Accident Investigation Board there was an inquest, reported in detail in the Falmouth Packet and which provides the basis of this account.

Unlike the other ferries, which were inspected and licensed by Falmouth Harbour Board, this one was owned by a Major Mead, a wholesale oyster merchant, who claimed that he had obtained a right to run the ferry through an ancient deed held by the Earl of Kimberley. This claim was much disputed and had been the subject of a high court action some ten years before in which the boatmen of Flushing, ably supported by the Vicar of Flushing, the Reverend Savage, saw the Earl’s case roundly defeated. Nevertheless, Major Mead continued to run his own ferries without licence, much to the despair of the Falmouth watermen who were forced to compete with his boats on unfair terms. 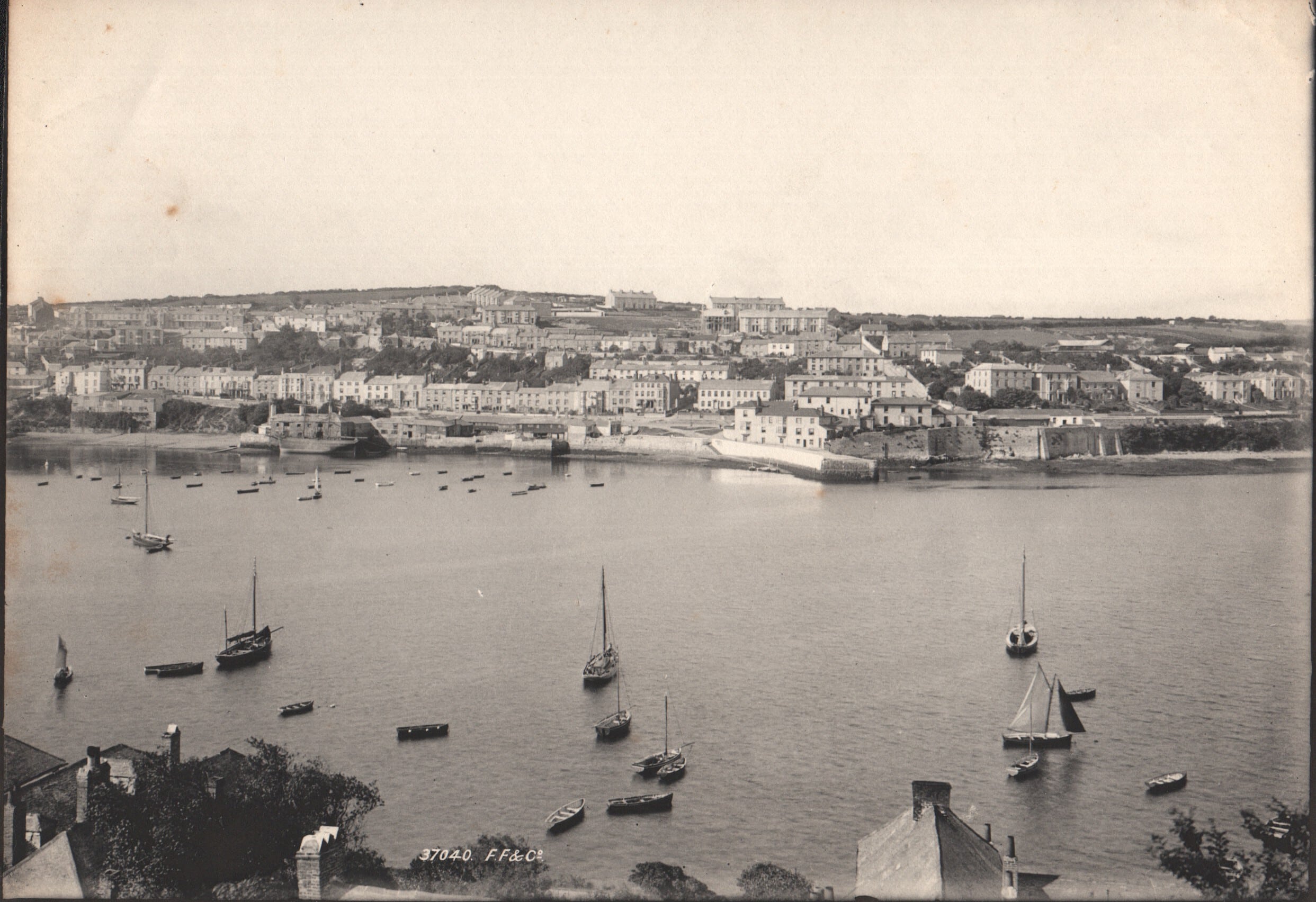 This contemporary photograph shows the route of the ferry. The photograph is taken from the Flushing side of the river with the slipway of the Greenbank Hotel on the bank directly opposite. Copyright: NMMC.

It was one of these ferry boats owned by Major Mead, which on the afternoon of April 7th, 1899 set off from Flushing quay with three passengers; Henry Watts, a seaman from the training ship HMS Ganges, a little girl called Tregidgo and 11 year old Ernest Drew. William Lang was at the helm of the boat and Matthew Laity was crew. The weather was very squally, according to Laity, and, with wind against tide, it was very rough. When about halfway across to the Greenbank side, a squall came up the river and Laity tried to lower the sail but the pressure of wind was so great that it would not drop. The boat quickly capsized, filled up and sank.

Two boats put off from Greenbank to rescue the passengers and crew and one had almost reached the boy, when (according to the report in The Falmouth Packet) its thole pins broke and one of the oars was lost. Ernest Drew, floated away from the rescuers and drowned.

The inquest into Ernest Drew’s death was held on April 11th in the King’s Head Hotel in Falmouth. It was a coroner’s inquest held in front of a jury made up in large part of people with some expertise in matters of the sea. A number of witnesses were called, including Matthew Laity, the crewman on the ferry, but there were notable exceptions. William Lang who was in charge of the ferry, was too ill to appear and when a juror asked where Mr Mead was, Police Sergeant Warren replied: ‘I am told he has gone to Fowey races’.

Much of the discussion in court centred on the handling of the ferry by its crew. Henry Watts, the Ganges sailor, vividly described what happened, saying that when he came on Flushing Quay the coxswain said despite the conditions he was going to cross. When the accident happened, Watts was soothing his (no doubt terrified) dog but he saw the halyard lowered and the sail staying up. Laity had told the coxswain to put the helm down but the boat was swamped on the lee side and over she went.

The coroner was scathing in examination of Laity:

Coroner: ‘But you (to Laity) are a practical man – didn’t it occur to you that holding the halyard was no earthly use?’
Laity: No; I had nothing to say about it because I was acting under another who had been accustomed to the boat for years.
Coroner: If I go out on a boat in a storm and saw the sheet belayed, I should want to know the reason why.
Laity: I simply did as I was told.
Coroner: This has always been the custom!

One juror remarked that the boat should have floated when overturned but it was evidently “patched up with pitch and putty and all kinds of stuff and was water sodden”. On the question of whether it should have sailed in the conditions prevailing it was pointed out that Major Mead did not employ anyone to control the boats except the men who sailed in them.

The foreman said it was a question whether the boats should be under the jurisdiction of a regular authority such as the Harbour Board, who had charge of shipping in the harbour. Was it right that such public traffic should be carried on at the sweet will of the men in charge of the boat? The Reverend Savage, the Vicar of Flushing, had communicated with the Board of Trade on the matter and the reply was that these boats should be duly
licensed but for some inexplicable reason the Harbour Board had not yet ordered the boats to be licensed.

In the Coroner’s summing up poor Laity was treated with a certain amount of compassion –he had at least turned up to the inquest – which was more than could be said for Major Mead or the Harbour Commissioners. The jury were asked whether they could blame a man for an accident which he certainly ought to have been able to control, but which he did not and the Coroner said that the regulation of the traffic must be to a certain extent left to the discretion of the captains of the boats. Even had the boats been under the control of any authority such as the Harbour Board that would not have prevented the accident, for the men would not have been deterred from belaying the sheet. It certainly was a primitive and very poor method of getting across a very important passage of water. He should have thought a decent, proper ferry would have been provided long before.

The jury’s verdict censured Major Mead but reserved its strongest censure for the Falmouth
Harbour Board. They recorded that ‘The Deceased’s death was caused by the capsizing of a boat brought about by the indiscretion of having a sheet belayed; and some special means ought to be provided for keeping the boat afloat in such circumstances.’ and that ‘The attention of the Board of Trade should be called to the neglect of the Harbour Commissioners in not taking any steps to cause the boats belonging to Mr Mead to be duly licensed, although they have been requested by the Board of Trade to do so.’

The Falmouth Packet was clear too in its application of blame: ‘‘Incomprehensible will it be to most people how the seafaring men in charge of the ferry blundered so egregiously over the halyard business’ but also the Harbour Board ‘persistently ignored the requests of the
Board of Trade to compel the owner of the ferryboats to have them licensed in order that they be under proper and better control.’

This is an extraordinary, if not desperate, defence. The Board seem to be suggesting that the very fact that they had never licensed Mead’s boats was proof that they did not need to be licensed. Today, of course, there would have been an inquiry followed no doubt by several court actions. Nothing of a kind happened here. On the surface the Commissioners’ behaviour appears inexplicable, but there is one factor which may have influenced their decision. In 1891 the Board had been involved in a law suit with a ship owner who claimed successfully that the actions of the harbourmaster had wrecked his ship. The Board was saddled with a bill for damages and costs of over £1500, the business was put into receivership, the Board was forced to mortgage their steamer and the Town Council was threatening to take over. Despite these problems the Commission survived but the Commissioners became unwilling to embark on any action in law.

The Commission carried on unscathed but increasingly burdened with rising costs and declining revenue. In the end the First World War and the increasing strategic importance of Falmouth Harbour as a defended safe haven for British shipping ensured government support and financial security. The Reverend Savage turned his campaigning instincts to the provision of clean water for Flushing and was rewarded in his declining years with his appointment as Rural Dean. The Falmouth watermen continued, much diminished in number, their quay punts converted to engine power but still providing services to visiting ships until the 1950s.

For 150 years Falmouth Harbour has been operating as a Trust Port. Falmouth Harbour Commissioners today are a statutory port authority with a Board of seven Commissioners and a Chief Executive Officer with the purpose of shaping and maintaining the Harbour for the benefit of all stakeholders. As Miles Carden the CEO of the Board says. ‘It is always good to be reminded of great historical stories in Falmouth Harbour, even those that have such a sad tragic end. This story is a timely reminder of how far we have come in relation to safe management of our Harbour, and how we review and make improvements around incidents such as this. I am very confident to say much has changed and peoples’ safety in the Harbour is at the heart of everything we do’.

The Bartlett Blog is written and produced by the volunteers who staff The Bartlett Maritime Research Centre and Library of National Maritime Museum Cornwall. The Flushing Ferry Disaster of 1899 was written by Tim Beattie.