In line with the roadmap out of lockdown we are planning to reopen the Museum on Monday 17 May. Read more about our reopening.

This exhibition tells the story of Captain Bligh, challenging the Hollywood depiction of the famous mutiny on HMS Bounty. In April 1789 Bligh and his loyal men were cast adrift mid-ocean in the Bounty’s 23 foot launch in the expectation they would die. In a remarkable feat of seamanship, Bligh sailed the heavily overloaded launch to safety across 3600 nautical miles of open sea from Tonga to Timor, in the East Indies. Our exhibition brings to life this survival story, featuring relics from the voyage and a specially built reproduction of the Bounty launch. 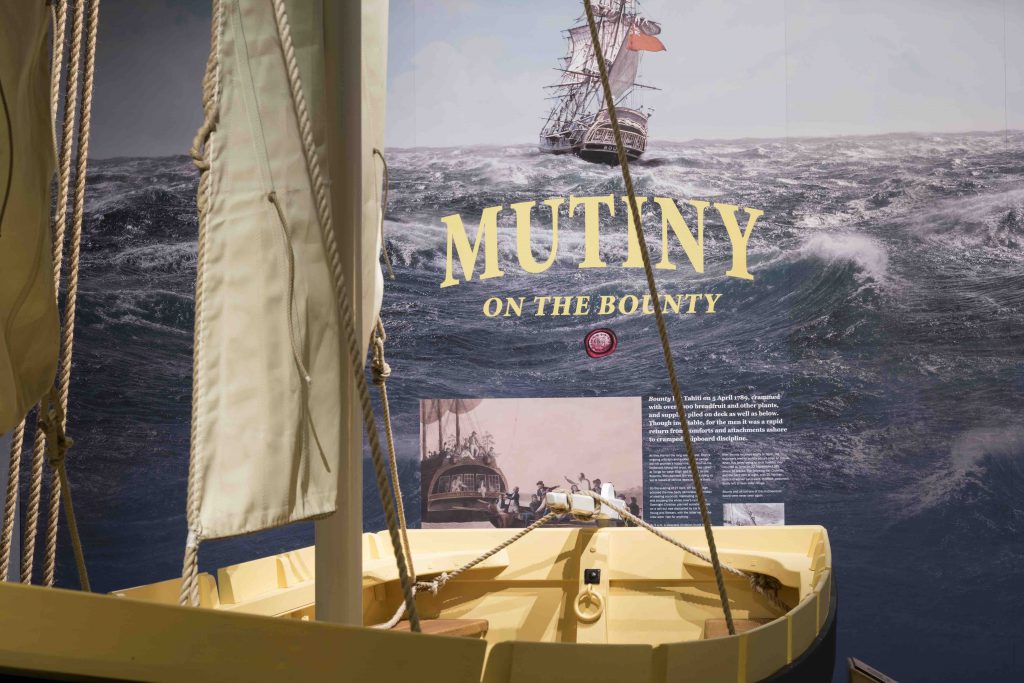 Image: The reproduction of the Bounty launch, a highlight of the Captain Bligh, Myth, Man and Mutiny exhibition. Photo by Paul Abbitt.

230 years ago, British navy ship HMS Bounty was sailing from Tahiti to the West Indies. During its 17 month voyage, in the middle of the South Pacific the famous mutiny broke out, led by Bligh’s acting lieutenant, Fletcher Christian. Bligh and his loyal men were cast adrift, mid-ocean in the Bounty’s 23-foot launch in the expectation they would die. 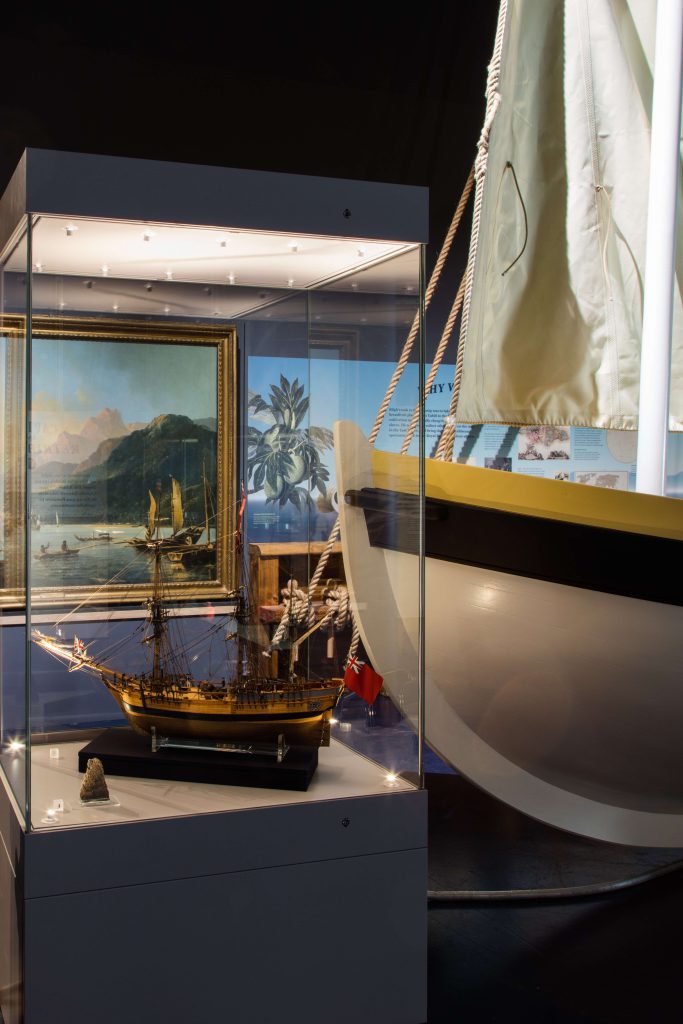 Image: Captain Bligh, Myth, Man + Mutiny features a faithful reproduction of the Bounty launch, original relics from the voyage, a fine model of the Bounty has also come from The National Maritime Museum Greenwich and one of William Hodges’s magnificent paintings of Tahiti, from Cook’s second voyage. Photo by Luke Hayes.

A triumph of endurance, navigation and leadership…

Cast adrift in the South Pacific, Bligh and his men seemed to face certain death. 19 men packed into the launch, which was only 23ft long and little more than 6ft wide. Supplies were only enough to last that many people, on normal rations, for five days. The journey would take over 48 days.

In a remarkable feat of seamanship, Bligh sailed the heavily overloaded launch to safety across 3600 nautical miles of open sea from Tonga to Timor, in the East Indies. This journey has been described as one of the greatest small-boat survival voyages, a triumph of endurance, navigation and leadership against extraordinary odds.

Experience the reality of this gruelling journey through some of the world’s most remote and unforgiving seas. Uncover the secrets of survival and get a closer understanding of Bligh’s epic feat. 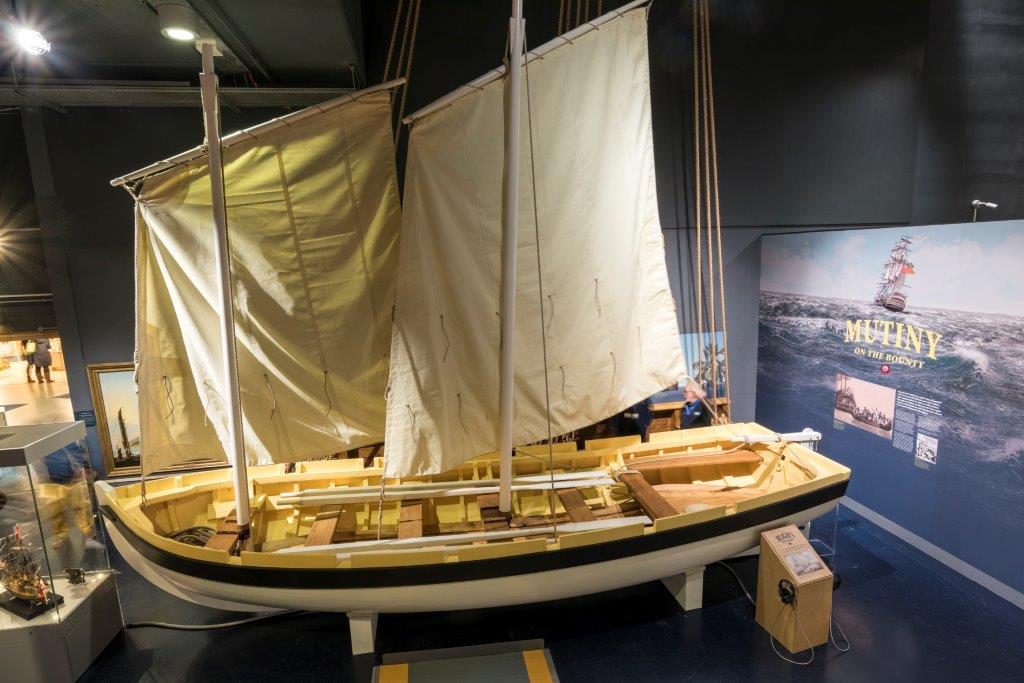 Bringing this journey to life

The exhibition brings this gruelling journey to life through a faithful reproduction of the Bounty launch and with original relics from the voyage – Bligh’s coconut bowl, bullet-weight (used for measuring the meagre rations), horn beaker and the magnifying glass he used to light cooking fires once they reached the Great Barrier Reef, all on loan from The National Maritime Museum Greenwich. A fine model of the Bounty has also come from The National Maritime Museum Greenwich and one of William Hodges’s magnificent paintings of Tahiti, from Cook’s second voyage. 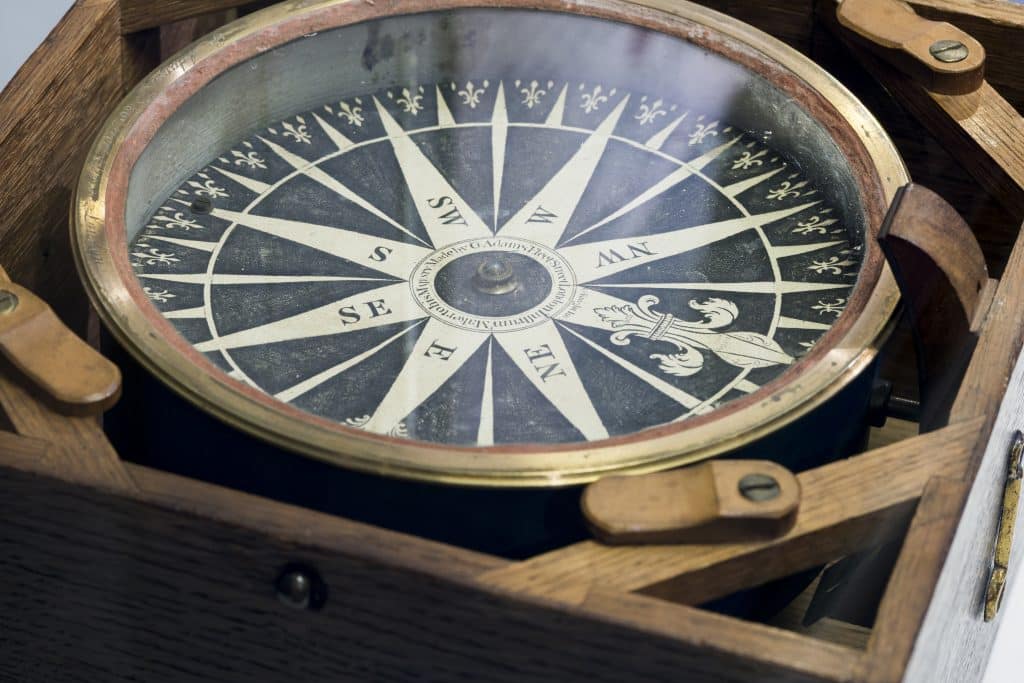 You can also listen to Bligh’s own words… 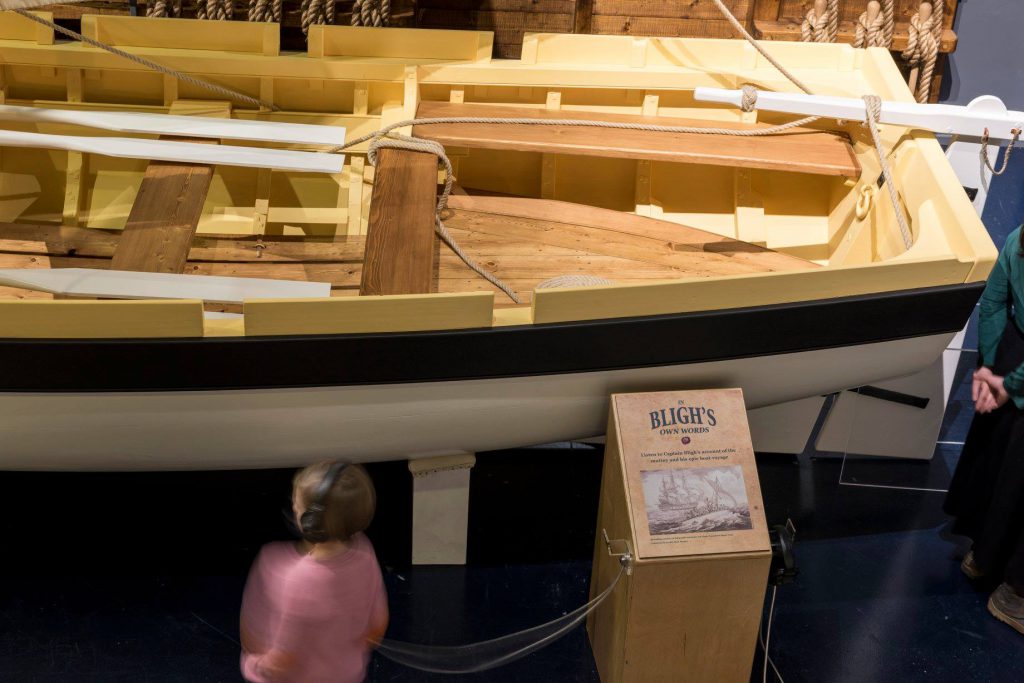 Image: Listen to extracts from Bligh’s journal in his own words. Photo by Paul Abbitt

The exhibition challenges the myths and stereotypical perceptions created by the various Hollywood depictions. There have been three popular and successful films: Mutiny on the Bounty (1935), starring Clark Gable and Charles Laughton as Christian and Bligh; in 1962 Marlon Brando and Trevor Howard reprised these roles, while The Bounty (1984) had Mel Gibson confronting Anthony Hopkins. Each presents a fairly straightforward tale of Bligh as  ‘villain’ versus Fletcher Christian as romantic hero. The exhibition, by contrast, outlines the historical facts to challenge these portrayals. 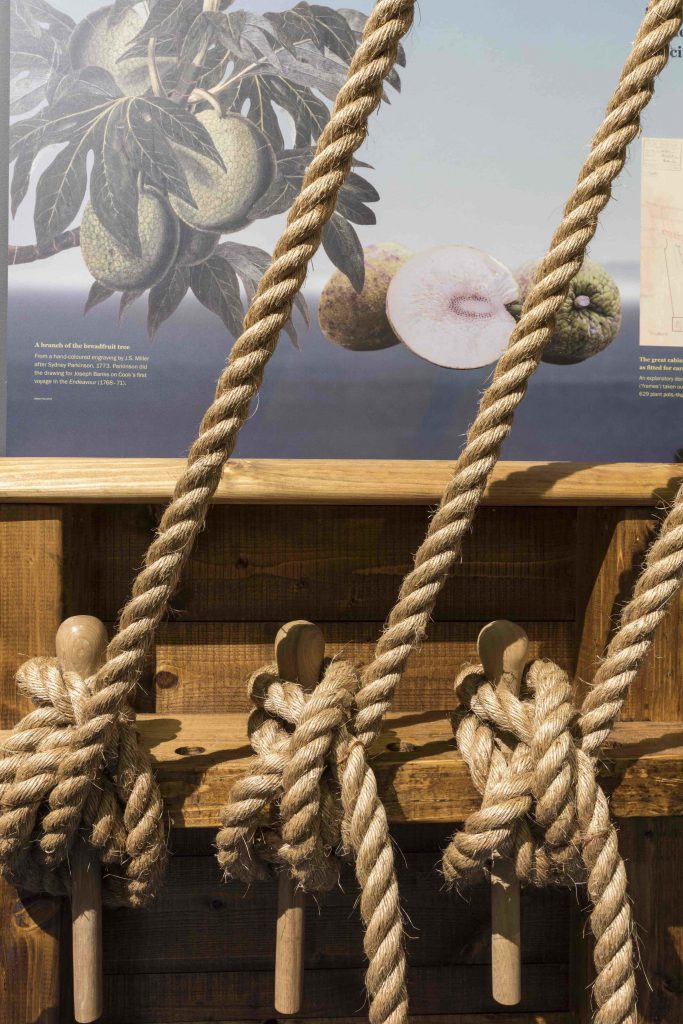 The museum takes a globally important story, and explores the Cornwall context, in this case Bligh’s Cornish roots. 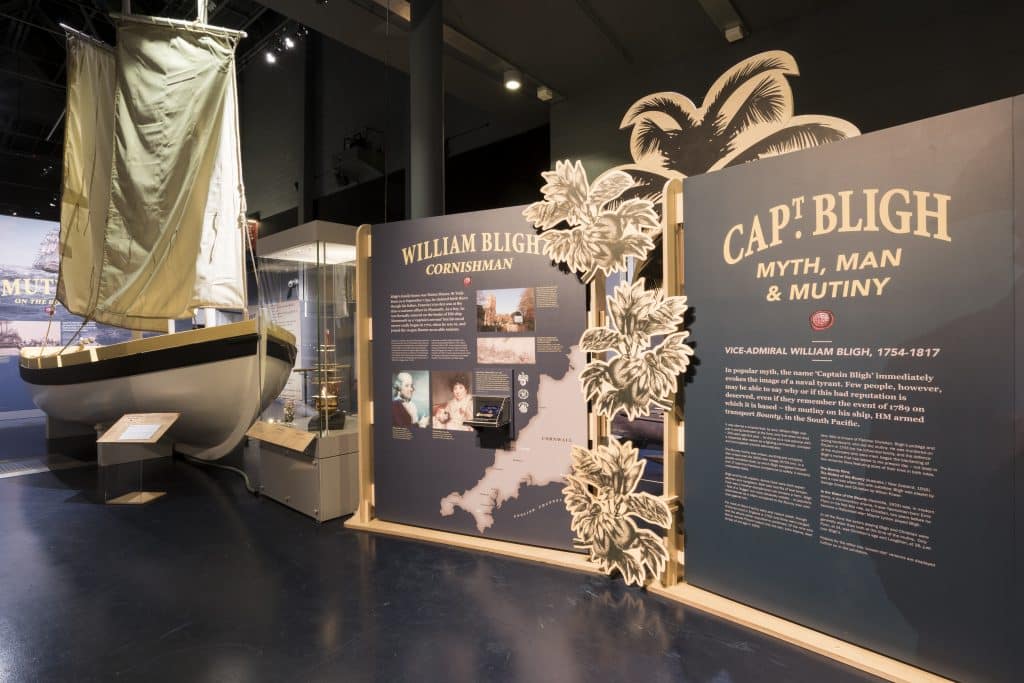 The in-house build of the Bounty launch is part of a programme of reconstructions of historical craft in the museum’s boatbuilding workshop. This build was led by professional and accomplished local boat builder Andrew Nancarrow supported by trainee Boat Curator Ollie Crediton and Advanced Apprentice in Boat Conservation Reuben Thompson and a small team of museum volunteers and students from Falmouth Marine School. Read more about the boat build project in this blog.

The National Maritime Museum Cornwall is also indebted to:

Our Learning team put on a brilliant range of brand new live performance, events and activities every school holidays.

Did you know that you can pay once and get in free for the rest of the year?

The Museum is open every day of the year from 10am – 5pm, except Christmas Eve, Christmas Day and Boxing Day.