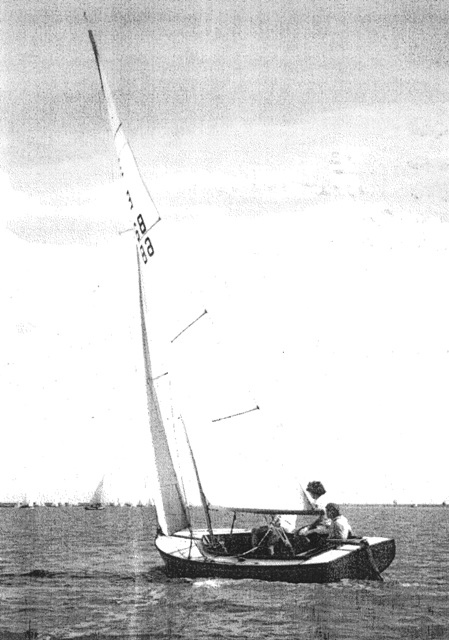 The Essex One Design dates from 1919, when it was commissioned as a “one-design” boat for the Essex Yacht club together with the nearby Alexandra Yacht Club, both sailing the tidal waters of Southend on Sea.

Another local and not dissimilar design, the Thames Estuary One Design, had originated a few years earlier in 1911, an era when various local one-design classes were mushrooming around the coasts of the UK.

Originally the Essex One Design boats all had musical names such as Fanfare , Caprice, Nocturne. Many of the original boats of this class, however, were wrecked in the great gale which lashed the east coast in 1946. Arabesque is one of the second wave of Essex One Design boats built to restore the numbers of the class and was built for a Miss Scott, the only female owner of this class of boat at this time and was mostly sailed on the River Blackwater on the Essex coast.

In the 1960s the two above-mentioned local classes decided to amalgamate, and commissioned designer Norman Dallimore to create a standardised set of drawings and specifications for the new Estuary One Design, with building allowed in GRP. One of the few designs to normally have a crew of three, Estuary One Designs continue to be sailed today, albeit in small numbers, on the Thames Estuary.