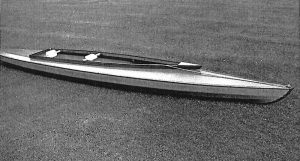 A design for an 11 foot single seater touring canoe was published in Light Boat magazine in August 1951, to a design by F.O.D. Hirschfield. The boat was designed to be suitable for home construction and general use and, with the combination of a relatively low price and the boom in boating’s popularity in the post-war years, a large number were built both at this size and to larger dimensions.

This particular example is a tandem design, 15 feet in length, and was home-built in the late 1960s from a kit produced by the Tyne Folding Boat Company of Twickenham. It is constructed of wooden frames covered with PVC impregnated canvas. It has a large open cockpit allowing the carrying of a small child in addition to two paddlers, which helped contribute to its popularity. Some boats were equipped with a spray deck but not all users liked them because of the danger of becoming entangled in the event of a capsize, and this example was never fitted with one.

This form of construction, which was very popular in this era can be viewed as on the one hand as a modern manifestation of the Inuit skin-covered design, and on the other as a transitional form between the similar shaped but wholly wooden designs popularised by “Rob Roy Mc Gregor in the late 19th century and more modern designs featuring the use of GRP/Kevlar etc.