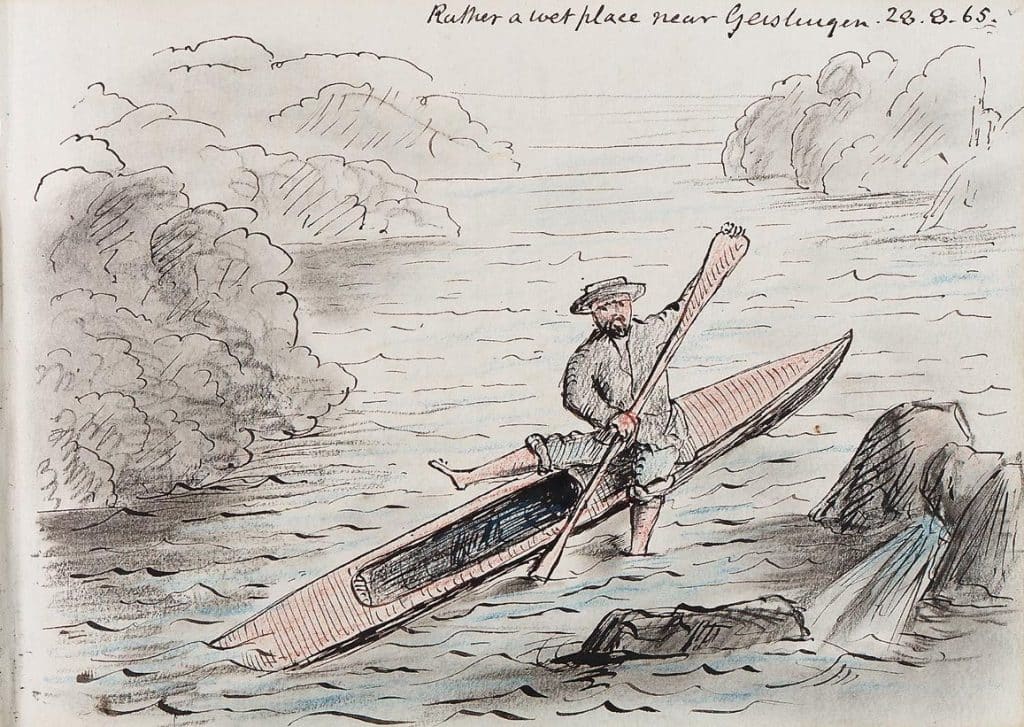 Modern day enthusiasts of kayaking probably do not describe their on-water activity as ‘canoodling’! Yet that was the term employed one hundred and fifty years ago by John ‘Rob Roy’ McGregor, to whose activities and designs the development and popularity of the modern sport of leisure kayaking can be attributed.

McGregor, nicknamed ‘Rob Roy’ after the Scottish outlaw and folk hero, to whom he was distantly related, was a Scottish barrister by profession but, like many moneyed gentlemen of his era, preferred to devote himself to both leisure and philanthropic activities. Although noted for his canoeing exploits, his motivation was not solely that of self-indulgence. Rather his travels, the books he wrote describing them, and the lecture tours he organised were all devoted to raising funds for various charitable causes.

John McGregor was born in 1825, the son of General Sir Duncan McGregor, and had an early acquaintance with the perils of boating, surviving two shipwrecks before he was 18 months old! At Trinity College, Dublin, he read mathematics and was an active oarsman. Subsequently he studied patent law and was called to the bar in 1851. During this time McGregor was developing a love of boating in its various forms and in 1848 his interest in canoeing was aroused by seeing the India rubber boat of Archibald Smith. Over the following years he travelled widely, partly in his capacity as an officer in the British Army Reserve. However, invalided out of the army in 1865 following an accident, he decided to design and commission a canoe to further his explorations and adventures. He approached Searles of Lambeth, who specialised in light weight clinker built rowing skiffs, and commissioned a design, inspired by Inuit (Eskimo) kayaks, but with sailing capabilities. The Rob Roy Canoe Mark I was 15 feet long (a length determined by the need to fit in a German railway wagon), with a beam of 28 inches and a draft of 3 inches. Driven by a 9 foot long flat bladed paddle, much longer than modern designs, it was also equipped with a mast, lug and jib sail rig. Built of oak planks on oak frames, with a mahogany sheer strake and a cedar deck it weighed 80 pounds.

Equipped with this craft McGregor set off in 1865 to explore the rivers of Europe, travelling between canoe-able sections of river by railway, river steamer, and at times ox cart, as well as sections of portage by hand. He covered over 1000 miles in his characteristic paddling garb of flannel jacket, matching trousers, canvas shoes, all topped off with a straw boater. Plus, of course, a spare suit for Sunday and evening wear. Returning from his travels McGregor wrote his first book A Thousand Miles in the Rob Roy Canoe on Twenty Lakes and Rivers of Europe. The book was an instant success and had to be reprinted several times in its first year. The enthusiasm that followed the book and his lectures led McGregor to found The Canoe Club in 1866, with its initial list of members including various distinguished oarsmen, travellers, alpine climbers and athletes. The Prince of Wales soon became the first Commodore. Canoeing did not meet with universal acclaim however, with some describing it as “a mockery of boating” and “the invention of savages”.

Undeterred, McGregor set off in 1866, in a shorter, lighter, Mark II version, to tour the rivers and lakes of Scandinavia, resulting in his second book. This voyage was distinguished by several lengthy overland portages as he discovered that his maps and charts were not wholly reliable! By this stage canoeing had caught the popular imagination and some 200 Rob Roy canoes had been built and sold.

For his next voyage McGregor decided he wanted to be not solely dependent on muscle power. Although previous designs had featured a sailing rig it appears they were little used, so his next design, the Rob Roy Yawl, 21 feet long with a 7 foot beam, was a proper sailing craft, and featured provision for cooking and sleeping aboard. In this craft he sailed across the English Channel and was then towed up to Paris for the 1867 Expédition Universelle, patronised by Emperor Napoleon III who wished to popularise canoeing in France. On this voyage McGregor, an active protestant Christian and frustrated missionary, carried with him a supply of religious tracts to distribute to the “benighted” Roman Catholics of Europe. A third book followed.

He then decided to extend his travels to the lands of the Bible and in 1869 took the latest incarnation of his canoe by steamer to Alexandria and paddled down the (still not completed) Suez Canal, before returning to Port Said, crossing to Beirut, paddling up the rivers of Syria, crossing to the headwater of the River Jordan and then travelling down the Jordan. Highlights of this trip involved portages past rapids and being chased and captured by spear-wielding locals. The Rob Roy on the Jordan also enjoyed publishing success.

Subsequent years saw paddling trips along the south coast of England (1870), and the coast and canals of Holland (1871). In 1873, at the age of 48, he got married for the first time and gave up canoeing, though he continued his lecture tours. John McGregor died in 1892, a name little remembered today, but unquestionably one of the great Victorian era adventurers, explorers and pioneers and one to whom modern paddlers owe a debt of gratitude for the popularising of their sport.