The Arrival of the Raft L’Egaré II 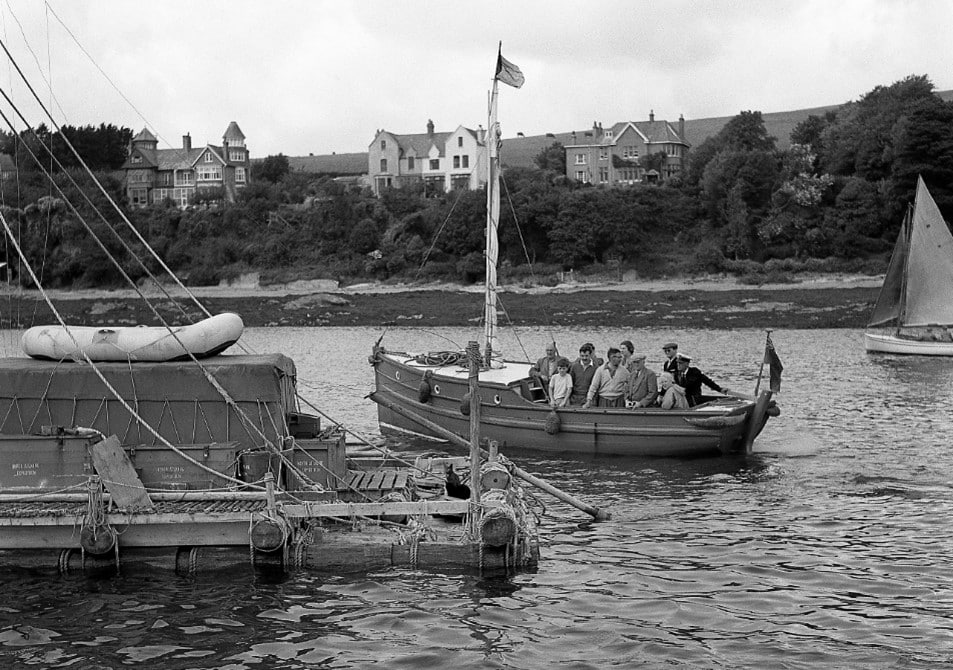 Sixty-five years ago this strange craft, L’Egaré II (or the ‘lost one’), arrived in Falmouth on 21 August 1956, having crossed the Atlantic from Halifax, Nova Scotia to Falmouth, Cornwall in 88 days. Carrying three men and two kittens, they became the first men in history to achieve this feat of endurance.

This photograph from the NMMC’s Collection shows the raft moored off Flushing in August 1956. It is part of the Museum’s Memories of Falmouth exhibition with images of Falmouth taken between 1934 and 1969. 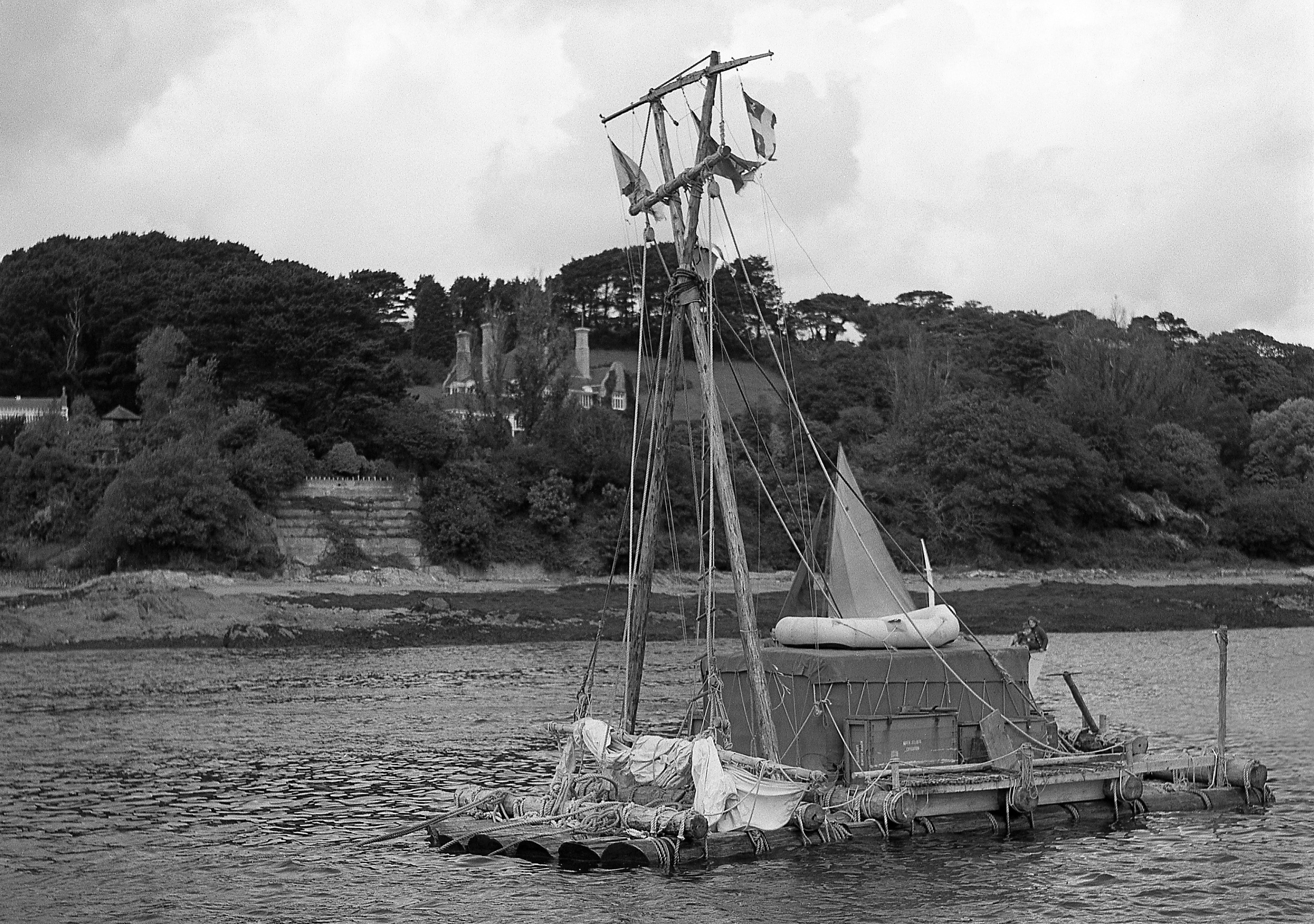 The raft L’Egaré II moored off Flushing in Falmouth Harbour in August 1956. ©NMMC

The voyage of L’Egaré II began with a daring idea; Henri Beaudout, then in his late 20’s, believed that it was possible to cross the Atlantic Ocean from West to East using the most primitive raft propelled only by the winds and currents of the Gulf Stream. The original crew of the log raft were Frenchmen, Henri Beaudout, the Captain, Gaston Vanackere, who would film the voyage, Marc Modena, the wireless operator and Jose Martinez, the cook, together with their kittens Puce and Guiton. Unfortunately, the cook could not overcome his seasickness and was taken off the raft by a passing research vessel that had picked up a mayday message.

The raft, L’Egaré II, left Halifax, Nova Scotia on 24 May 1956. This was not the first time that Henri Beaudout had attempted this crossing. His first raft L’Egaré I was wrecked off Newfoundland during August 1955.

The 17ft x 30ft raft was designed by Henri Beaudout and was made of nine logs of red cedar-wood from British Columbia that was hard and tough and yet comparatively light and buoyant and had a texture that would absorb very little water. No nails were used in the construction of the raft, the logs were attached to each other with manila rope and the raft had a square sail, 19ft by 14ft made of canvas woven from Egyptian cotton. There was a small cabin and a radio. Permission was granted for the raft to be built at the yard of the Halifax Shipyard Co. Ltd., where workspace and shelter were provided by the yards’ Chief Superintendent.

Having fought cold, hunger, sharks and the unpredictable elements, L’Egaré II arrived in Falmouth Harbour to a very warm reception. The quays were lined with crowds of cheering people, and vessels of all shapes and sizes sounded their sirens. The raft had been towed into Falmouth by the Falmouth lifeboat Crawford and Constance Conybeare and the Lizard lifeboat Duke of York.

Thousands of people visited Falmouth to see the raft during the two weeks when it was eventually moored at Custom House Quay at the back of the Falmouth Quay Punt Office.

The voyage was dubbed ‘the Atlantic Kon-Tiki’ and was headline news at the time. The crew became celebrities and attended various functions in their honour. 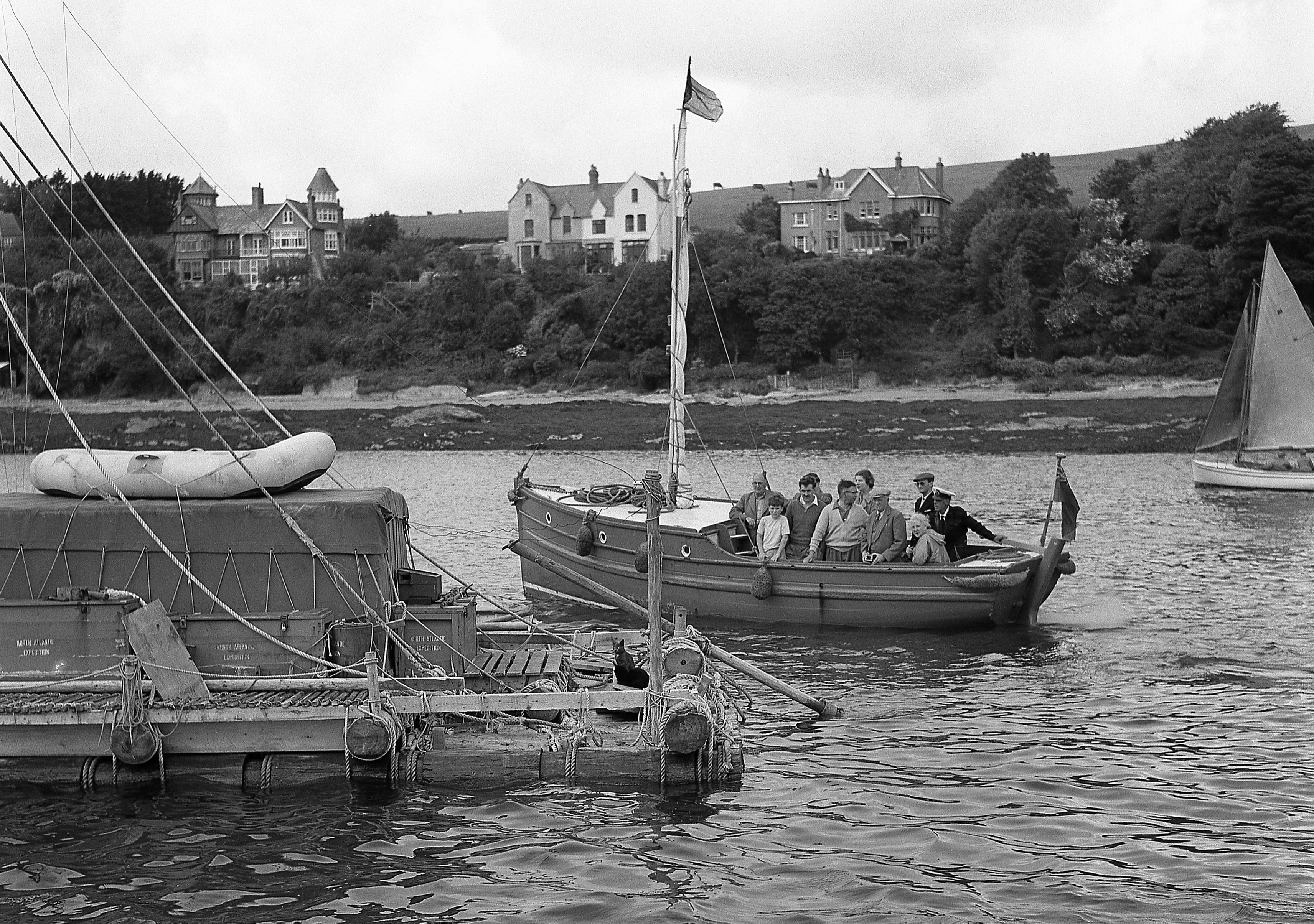 A further entry in the Harbour Master’s Journal on 30 August 1956 states that the two cats were removed from the raft under Ministry of Agriculture and Fisheries licences and taken to quarantine kennels at Folkestone.

The kittens, Puce (meaning ‘flea’ in French) was a black male and Guiton, his sister, was grey, were secured in a small box for their own safety in rough weather and spent most of their time playing or sleeping. They often fell into the sea but climbed back on the raft.

The kittens were eventually adopted by the Duke of Bedford, a cousin of Queen Elizabeth II; he agreed to take them in after he had invited Beaudout and his crew to meet him.

Entry in Falmouth Harbour Master’s Journal No. 35 giving details of the quarantine arrangement for the kittens, dated 30 August 1956.

The story did not end there. In 1956 Maurice Duplessis, Quebec Premier at the time, persuaded Henri Beaudout to bring the raft back to Quebec at great personal expense, promising that it would be displayed in a museum. When it arrived, no plans had been made and the raft eventually rotted away at the village of Neuville, 20 miles west of Quebec City.

However, in 2012, the Captain of L’Egaré II, Henri Beaudout, in his eighties, together with a group of enthusiastic supporters started a campaign to raise funds to have a full-scale replica of the raft built and placed in a Canadian museum, to finally give the raft and the expedition the recognition it deserved.

In July 2016, a replica of the raft was put on display in Quebec’s only maritime museum, a former convent in the small town of L’Islet-sur-Mer, in the Lower St-Lawrence region. It was only a third of the size of the original, 10ft x 5.5 ft instead of 30ft x 17 ft. This was not as promised by the late Quebec premier, but did commemorate the remarkable voyage across the Atlantic.

Contact with Canada in 2013 – a note from the author

This blog is based on a previous article I was asked to write for the NMMC website in 2013 and when I was researching the raft, I contacted the team in Canada who were involved with fundraising for the replica raft and producing a television documentary about Henri Beaudout and the raft.  I forwarded my article which was translated into French and given to Henri who was delighted with it.

The main question that was asked after the article went on the website was ‘Why kittens?’.  Henri’s book The Lost One recording this extraordinary adventure, does not say where the kittens came from or why they were taken, but some sources suggested ‘they were presented to the crew of the raft as mascots, and it was also thought they could act as useful ‘weather watchers’, with an ability to predict incoming bad weather’.

I contacted the Canadian team again with these questions and received the following reply.  “Both of those are true.  As Henri tells it, every adventure needs a mascot, (Kon-Tiki had a parrot) and they had kittens.  And the theory about their usefulness as far as weather prediction is concerned is also true.  The crew always knew when they were in for something bad when the kittens hid in the cabin.  They also served as something warm to cuddle up with and receive some affection during the hard journey.

We believe the kittens were just given to the crew by a lady in Halifax.  They were nearly prevented from bringing them due to some citizens’ concerns for the kittens’ safety, but the crew managed to smuggle them on board at the last minute”.

I emailed my contact in Canada in June and asked him to let Henri Beaudout know that we have not forgotten him here in Falmouth, and that there were currently two photographs of the raft on display at the museum in an exhibition.  He confirmed that Henri is still alive and that he turned 94 in April.

The Bartlett Blog is written and produced by the volunteers who staff The Bartlett Maritime Research Centre and Library of National Maritime Museum Cornwall. Arrival of the Raft L’Egare was written by Lynne Vosper and was produced as a result of the extensive cataloguing of the Weller photographic collection.

The Memories of Falmouth exhibition runs until Sunday 3 October 2021 and features archive photography and film from NMMC’s archives, providing a fascinating insight into Falmouth between 1934 – 1981.