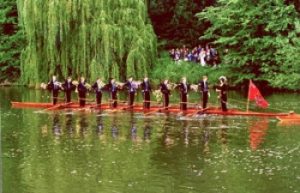 This unique boat was built primarily to take part in the Boat Procession at Eton College to celebrate the birthday of King George III on 4th of June.

The King’s interest in Eton College is commemorated annually by the procession, and there are references to a procession of boats as far back as 1784, but it was not officially recognised by the College authorities until 1834, and was usually followed by fireworks and supper.

The largest of the boats was a ceremonial ten-oar, the Monarch, crewed by boys dressed in special outfits and bearing flowers round their boaters. The cox dressed in the uniform of a naval officer. As the boat passed before Windsor Castle all the crew stood up in the boat and lifted their oars into the vertical position: maintaining balance was something of a challenge.

This boat, the fourth Monarch in the line, was built for Eton by Sambo Parkins and Son some time between 1875 and 1890. It is the only known Parkins boat surviving, and is one of very few examples of 19th century racing clinker-built boats. It is also an example of the once common side seated boats, where outrigger lengths are adjusted to give a constant oar leverage throughout the boat’s length.