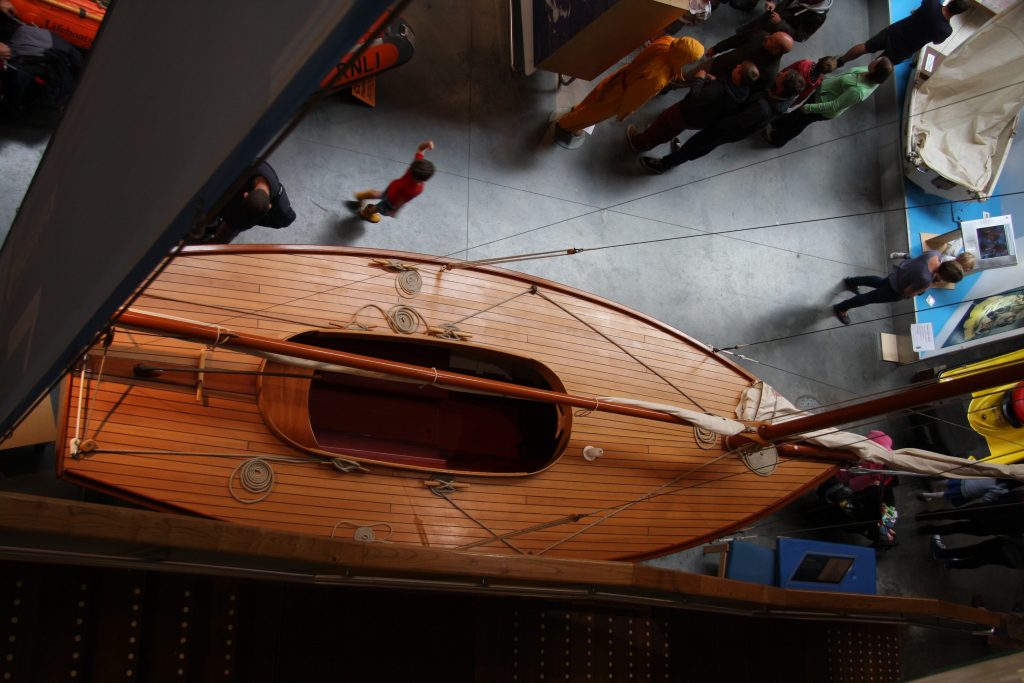 William Fife (1857-1944) has a reputation for being one of the world’s foremost yacht designers.

His father and grandfather had also been boatbuilders and had a construction yard at Fairlie, on the Clyde. Fife’s yachts achieved a reputation for superb craftsmanship and a good turn of speed. His clients included Sir Thomas Lipton, the grocery millionaire, who commisioned Fife to design Shamrock, the Americas Cup challenger. Fricka was commissioned by Robert Mann, a prominent Glasgow businessman.

Small dinghy sailing was still in its infancy, but yachting was becoming a popular sport among the Victorian middle class, and it was boats such as Fricka that were appealing to a wider audience. During her first season of racing Fricka achieved seven first and eight second prizes out of twenty five starts. She was sailing until 1973, when she was purchased by the National Maritime Museum at Greenwich. In 2001 she was considered to be an important boat for the new National Maritime Museum Cornwall (NMMC), and the decision was made to undertake a comprehensive restoration programme. There followed a close collaboration between NMMC and the Liverpool Maritime Museum’s Shipkeeping Department, headed by John Kearon. Meticulous research was carried out to ensure that the restoration would be true to William Fife’s design.

Fricka had been much modified during her life: the cockpit had been moved aft and its shape altered; the mast had been moved and the rig changed from gunter to bermudian, and a calico covered deck had replaced the original tongue and grooved planking. It also became apparent during detailed investigation of paint coatings, previous fastening holes, stealer planks and transom top that the sheer line of Fricka had been raised at some time.

During the research it was discovered that a sister yacht to Fricka, Hatasoo, was based in Scotland and still sailing. Hatasoo was a contemporary of Fricka’s and the two boats often competed against each other in yacht races on the Clyde Estuary. Much of Hatasoo’s structure and arrangement was original, which was very important to the restoration team, as the only original records that remained of Fricka were a photograph or two and a basic lines plan. Restoration work was carried out at Liverpool over the course of the next year. Information from Hatasoo enabled the team to fill in the remaining pieces of the jigsaw and, some 15 months after the project began, after much painstaking work, Fricka was fully restored to her former glory. Her original hull was largely saved and conserved, and she had a new deck, cockpit, mast and spars.

Fricka can be viewed in the Museum’s Main Hall gallery, together with a short film describing her restoration.