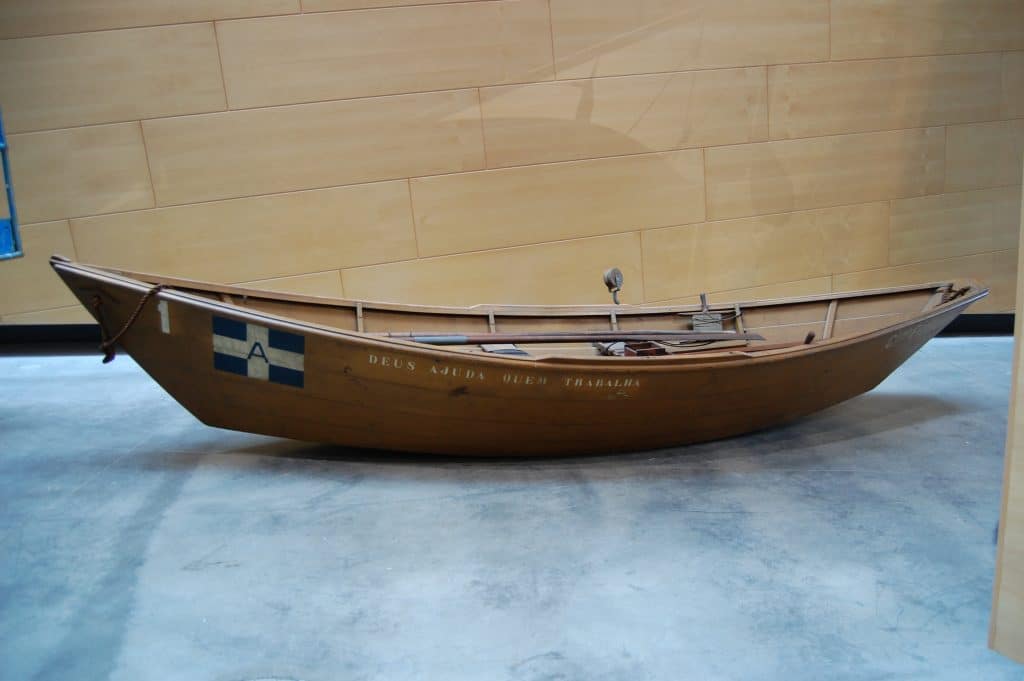 Until the collapse of its cod stocks, the Grand Banks area off Newfoundland was one of the most productive fishing grounds in the world.

The region is also renowned for its severe weather conditions. The fishing dory was designed to be used in these treacherous seas, and was used for many years.

The origins of the dory type of boat are lost in the past, but they were carried on fishing schooners until the 1950s. They were simply but strongly built: wide clinker planking, flat bottomed with removable thwarts and propelled by oars or a lugsail. They could be nested one inside the other, enabling 60 dories to be carried on the deck of one ship.

The fishermen drew lots for their dories, which were numbered, so nobody would be seen to have the unfair advantage of a better boat. There was no number 13. The dories were lowered over the side of the vessel and the crew would fish for the cod using long lines. They were sometimes away from the schooner for days and the weather conditions could be perilous.

In big sea conditions the dory was as safe in experienced hands as any other small boat, although many men perished, usually from sudden bad weather or fog. If caught in bad weather the doryman would try and reach another dory. Failing that he would throw most of his catch overboard, keep some for ballast and huddle down in the bottom of the boat.

“I was out with another fellow in a dory hauling trawls in a light snow…As the water grew rougher with the mounting wind, the dory began to pitch and toss…It blew almost a hurricane all night, a bitter, howling wind driving the snow and the spray into you until your very marrow seemed frozen stiff…The dark came on again, mighty fearsome, I tell you – the foam hissing and lashing us, the sea wild and mad, as I had never seen it in my young life.

We were just a mite on that monstrous raging sea…Then it began to hail. The wind got up to 45 miles an hour…We hadn’t eaten for mor’n 36 hours. Our clothes were stiff with the frozen spray and water…”

The Museum Dory was donated by Alan Villiers in 1972. Villiers made a six month voyage on the portugese cod fishing schooner Argus in 1950. He recorded his experiences on film, stills and in a book, The Quest of the Schooner Argus, which remains one of the most important sources of first hand information about a once thriving industry.