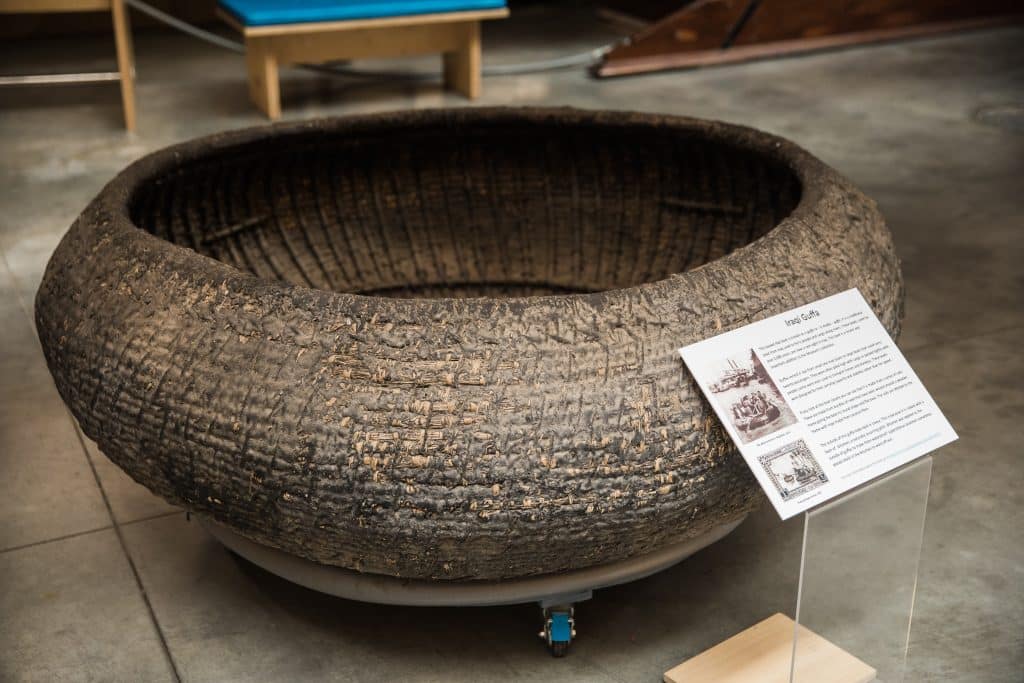 This coracle-like craft is an Iraqi “guffa”, a traditional form of craft used for both cargo and passenger transport on the rivers of Iraq, notably the Tigris, for millennia: the first reference is in the writings of the Greek historian Herodotus in the fourth century B.C.

Photographs of Iraq from a century ago show the cities’ river banks teeming with these craft but these days they are an unfamiliar sight, having been largely superseded by motor vehicles for both passenger and cargo transport.

Guffas were built in a range of sizes form one-man craft to much bigger vessels 4-5 metr4es in diamter: old photographs show guffas loaded with over twenty people or with horses and cargo.  With their circular shape they are are not designed for speed or sea-worthiness but for the carrying of the greatest possible cargo with the most economical use of material. This is important because in some cases, particularly on the Tigris, the guffa was abandoned after one long-river voyage.

The construction is a wooden frame, frequently made from branches of the pomegranate tree, with fronds of the date palm woven in a circular fashion around the frame starting at the bottom.  The whole is then covered with a liberal coating of naturally occurring pitch for waterproofing (though some references mention use of animal skins as an outer skin) and is propelled with a paddle.  Larger examples involve two or more paddlers. With their basket shape and “tumble home” (hull wider at the waterline than at the gunwale) they are more stable and much less prone to capsize than European designs of coracle and, despite their shape are said to be easy to manoeuvre or propel in a straight line.