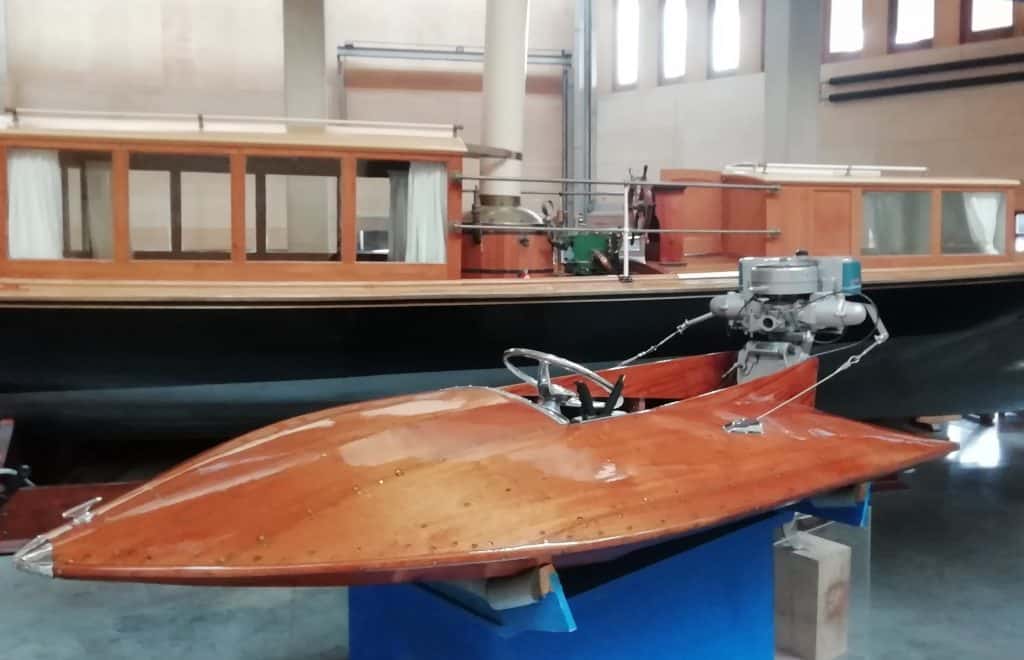 Hydroplanes were developed in the 1920’s and 30’s as outboard engines became available and increased in size and power.

Originally outboards were used on utility boats but as racing evolved and speed records were set hydroplanes were designed as a way of going much faster.

This particular boat was designed by a naval architect named Bruce Crandall and the plans were published in the 1935 edition of Motorboating magazine. The builder of this “Class C Flyer” is not known but it is built almost exactly to the specification on the plans with a spruce frame, 1/4 inch mahogany planking and many hundreds of brass screws. The boss of the original steering wheel was a coin dated 1944 suggesting it was fitted around that time. “Class C” refers to the size of the outboard motor – in this case of 20-30 cubic inch capacity, in practice a 22.5HP engine. The engine fitted to this particular boat is an Evinrude Speeditwin, a ‘stock’ 1944 engine, reputedly unused from equipment produced in preparation for an American invasion of Japan which was not needed.

The driver kneels, head down, with one hand on the wheel, which has a large diameter reel to allow the engine to turn enough with small one handed movements, and the other hand on a deadman’s throttle. There is no clutch; an assistant starts the engine and the boat starts moving immediately. With their light weight, flat bottom (there is a small ‘step’ on the bottom to provide lift) and powerful engine, speeds achieved were in excess of 50mph.

Although raced and used for speed records these craft were also just used for leisure: this particular boat was used for fun in the 1950’s on Lake Windermere in the English Lake District and Carr Mill Dam in Merseyside.