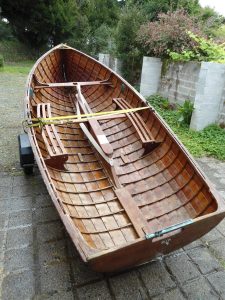 As leisure sailing increased in both affordability and popularity in the years after the Second World War many rivers around the UK coast had their own class of locally designed and built racing dinghies. The Helford Delta Class was designed and built by Dick Winfrey who ran a small boatyard on the south bank of the Helford River near Helford Point in Cornwall.

The dinghy is approximately 11 foot 6 inches overall, clinker built, with a modest beam; not unlike a National 12 of the 1950s but less beamy. She has fairly pronounced V-section forward and as a consequence is quite tender. The dinghies were raced by teenagers in the Regattas during Falmouth Week and there were also regular races throughout the summer.

It is believed that a total of about 22 dinghies were built. This boat, now named Julia but originally Moshulu, is Delta No 16. Unusually she has hardly been modified at all and is pretty much the standard boat.

One unusual feature is that the Class Rules required Breton Red sails which stood out at a time when most dinghies (except for the larger Redwings) had white sails.