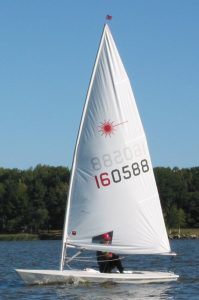 Some designs of dinghy prove longer-lived than others. Although changes in materials, and indeed fashions, can lead to changes in popularity, another key factor can be whether the class rules stipulate the boat as a development class or a one-design. In development classes the scope for experimentation and modification is considerable and in the more extreme cases, like the International Moth, modern boats share almost nothing in common with the original design. Some suggest that such designs can tend to favour the sailors with the deepest pockets rather than those with the greatest skills

In one-design classes, however, very strict rules constrain the design with parameters such as hull shape/size/weight, fittings, and rig size all tightly defined by the class association, and with new boats often only available from identical moulds from a limited number of authorised builders. Possibly the strictest application of the one-design principle is in the case of the Laser.

Note: The name “Laser” originally only applied to the boat described in this article, that now known as the Laser Standard. However over time “Laser” became a brand rather than just a single design and there have been a number of very different dinghy designs from this stable.

The Laser was originally conceived by Canadian designer Bruce Kirby as a simple, car-toppable dinghy to form part of a line of camping equipment. Kirby sat on the design for a while but in 1970 submitted it to a competition run by an American sailing magazine for a new low-cost dinghy. Kirby’s design easily won its class and was introduced commercially at the 1971 New York boat show. It has since become one of the most popular dinghies in the world, with over 200,000 boats in 140 countries. Bruce Kirby had neither the finances nor the manufacturing capability to mass produce or market the boat himself, so he sold manufacturing licences to existing dinghy manufacturers with exclusive geographical sales regions. This was to lead to problems later.

The Laser’s appeal lies partly in the simplicity of its design. A flush deck with only a small well for the feet and low freeboard, are complemented by a two piece unstayed mast with a sleeved mainsail, and a simple daggerboard. Thus the boat is relatively cheap to buy, quick and easy to rig, and comes up dry after a capsize. The other feature contributing to its appeal is that it is exciting to sail. According to its class association, “the Laser rewards athleticism, subtle steering and trimming techniques, as well as tactical excellence”. However, in stronger winds keeping the boat upright requires not just body weight but also agility and strength, notably of stomach muscles because of the straight legged hiking position required for most efficient sailing.

Because of these considerations, for a number of years the design tended to appeal more to male than female sailors, at least at the top level. In the mid 1980s alternative rigs began to be offered, with a shorter mast and reduced sail area, but with everything else identical. These boats were known as the Laser 4.7 and the Laser Radial, with the original boat now named the Laser Standard. These changes opened up the class to younger lighter weight sailors who could now start with the 4.7 and then move up in the class by buying progressively larger rigs without having to buy a new hull or other fittings.

The Laser was adopted as a single handed class for men at the Olympics in 1996 and for ladies, as the Radial, in 2008, and has been the training and competition boat of choice of two of the most successful Olympic sailors of recent years. Briton Ben Ainslie won the Laser Radial World Championships in 1993 at the age of 16 and then went on to win Silver in the class at the 1996 Olympics and Gold at the 2000 event, before switching to the Finn class for Olympic competition, in which he also won Gold medals at three successive Olympiads. Ainslie’s tally of five Olympic medals follows the pattern of Brazilian sailors Torben Grael and Robert Scheidt, the latter winning Gold medals in the Laser class at the 1996 and 2004 games, though beaten into Silver place by Ainslie in 2000. At the time of writing in November 2014, Ainslie’s Gold medal winning Laser and Finn boats were on display in the Museum.

Despite, or perhaps because of its success, the future of the Laser class is in doubt as a result of a complex legal dispute over the payment of design royalties between Bruce Kirby as designer and Performance Sailcraft as the builder which held the manufacturing licence for the world outside a few Asian countries, a dispute which has also embroiled the International Sailing Federation and International Laser Class Association. The case has been the subject of claim and counter claim since 2008 and shows no sign of early resolution; in the meantime Bruce Kirby has been seeking to reintroduce the design and gain official recognition of it as the Kirby Torch.