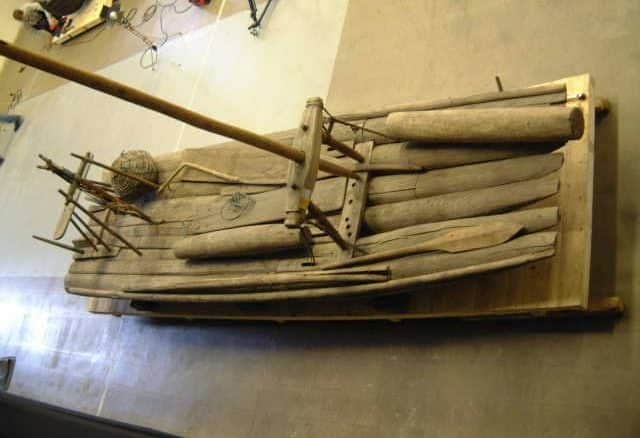 Simple fishing rafts made from available materials, with designs adapted to local conditions, have been found across the globe: from their use in Polynesia, by Aboriginal Australians, via the Tamil coast of India, to the north east coast of Brazil.

When the Portuguese arrived in Brazil in the sixteenth century they encountered very simple square rigged rafts which they called jangas after similar examples they had seen in India. The name evolved over time into jangada and the fishermen using such craft came to be called jangadeiros. The Portuguese modified the design to add a mast and Bermudan style sail but otherwise the jangada has remained essentially unchanged since that time.

A jangada is constructed from logs of the piuba tree, whose wood, like balsa, is both light and naturally very buoyant. Typically six logs between five and eight metres in length are laid side by side and pinned together with hardwood pegs and fibre ropes – in the traditional version of the craft no metal fastenings are used anywhere – and the logs at the bow are trimmed into shape and upturned to create a prow. There is a single triangular sail of cotton or hemp set on a curved mast fastened against a bench seat with an adjustable foot, with usually five different foot positions which can be used depending on wind direction. The foot of the sail fastens to a very long boom often extending well aft of the stern. A deep dagger board or hinged centre plate counters sideways drift, and the whole craft is steered by a broad bladed oar lashed at the stern, handled by the helmsman from another athwartship’s bench. The flat bottomed raft is stored on logs on the beach, over which it is rolled to launch by the crew of between two and five.

With the centre plate raised the shallow draft not only facilitates launching and recovery but also allows easy navigation over the reefs which are common both close inshore and indeed further out to sea. Although the sea can penetrate between the logs and waves can wash freely over them, conditions in inshore breakers and offshore that would swamp a hulled boat, nevertheless the jangada is prone to capsizing, and sailing what looks like a very simple craft is actually a very skilled operation: jangadas can reach speeds up to 10 knots. Fishing is by hook and line with the catch of smaller fish stored live in a basket at water level, while larger fish are brought aboard with a pronged spear.

Despite the apparent frailty of such craft they were not only used for inshore fishing, when they relied on the morning breeze to carry them out and the afternoon sea breeze to bring them back, but also for voyages up to 40 miles offshore. Such voyages could last up to four days with the fishermen lashing themselves to uprights to take brief naps.

The logs become water logged during each trip and the craft have to be hauled out of the water and allowed to dry out before being taken out again. After about a year a raft becomes so water logged that it needs to be replaced. This has placed a high demand on suitable piuba trees, which became scarce, so other woods had to be used. Since the 1940s construction has favoured planks, which are stronger and easier to maintain than logs.
This traditional method of fishing has struggled to survive in the modern world. The jangada has been unable to compete with modern powered boats serving the growing urban markets and better able to operate all year around. In addition, for a time, piracy by bandits on powered craft who also ignored fishery regulations, plus exploitation by rapacious middle men, combined to drive many jangadeiros out of business.

Meanwhile the process of urbanisation and the growth of tourism have turned many former fishing villages into urban sprawls or tourist resorts. Some enterprising jangadeiros have turned their hand to taking tourists for short trips on their simple craft, but many have forsaken the sea and their subsistence level of fishing for better paid jobs ashore.

Nevertheless the jangada and the jangadeiros retain a particular place in Brazilian folklore, literature and culture, with poetry, novels and songs dedicated to their way of life. This is not only because of their traditional craft and methods of fishing and all that they represent in terms of a struggle for survival, but also as a result of their involvement in various civil rights issues. In the 1880s a severe drought hit north east Brazil which impinged heavily on the slave-dependent agriculture of the region. Plantation owners began to sell their slaves and looked to the jangadeiros to ferry them out to ships to transport them south where demand remained stronger.

The jangadeiros however were opposed to this unjust activity, standing firm against the land owners and the threats of the emperor and the military: their activity was instrumental in the beginnings of the abolition of slavery. In 1941 they were active again, with four jangadeiros undertaking a 61 day voyage to Rio de Janeiro to protest against the poor conditions in their communities and to petition for their inclusion in the country’s social security system. Their story so inspired the film maker Orson Welles that he broke his contract with the RKO studios to go and film the men as a tribute to their courage and way of life. Tragically, however, the leading jangadeiro was drowned during a re-enactment. The film project was abandoned and only completed decades later.

The museum’s example, thought to have been built in the 1970s, was presented to the National Maritime Museum by Varig Brazilian Airlines in 1978.