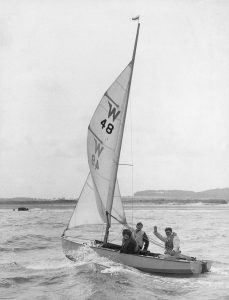 Over the years since the Second World War, when sailing has expanded to become a sport of the masses rather than just the leisure pursuit of the rich, there have been hundreds of dinghy designs, and also many designers. Few designers have been responsible for more than a limited number of designs and fewer still have seen many of their boats find wide acceptance. Among this elite group are the likes of Uffa Fox, Jack Holt, Peter Milne, and Ian Proctor.

Ian Proctor (1918-1992) had more than one hundred designs to his credit including the Gull, National 18, Tempest, Topper, Wayfarer, and Wanderer. Each of these designs has its own attraction and adherents, but perhaps the one design that has proven over more than 50 years, to appeal to the widest audience is the Wayfarer.

Proctor conceived the Wayfarer back in 1957 originally as a dinghy to be suitable for day sailing and cruising. With its flat bottom boards, and with the erection of a boom tent, owners could sleep aboard, albeit in somewhat Spartan conditions, as so well demonstrated by Frank and Margaret Dye in their classic long distance dinghy cruising. The Wayfarer quickly became popular among a wider range of users, with racing helmsmen and sailing schools both adopting the design. To this day the Wayfarer remains a hugely popular boat in use in sailing schools due to its capacity (at nearly 16ft in length it can accommodate up to six adults), its stability and seaworthiness, and its ability to offer satisfying sailing. To date some 11,000 Wayfarers have been built. Although by the standards of dinghy design this is not an especially large number, and indeed some of Proctor’s other designs, notably the Topper, have seen more boats built, the Wayfarer remains a classic among dinghy designs, and is still going strong today.

The Mark I boat was designed for construction in plywood either by amateurs or licensed builders, with a double chine hull to give a compromise between stability and ease of construction. Wooden boats continued in production well after glass reinforced plastic (GRP) was becoming common in boat building, as the wooden boats offered a degree of stiffness for racing sailors not found in the earlier GRP versions. The last wooden boat, number 9558, was built around 1994.

GRP construction commenced in 1965 with a number of internal changes, although the hull design remains to this day essentially as originally conceived. Most of these differences revolved around the positioning of the forward bulkhead, the construction of buoyancy compartments and the implications of this for recovering the boat after a capsize. The Mark II GRP boat, introduced in 1974, enjoyed almost as long a run as the Mark I wooden boat, and more boats were built to this design than to any other version of the Wayfarer. Other variations followed and in the early 1990s there were six different versions all in production at the same time.

Shortly before his death Ian Proctor collaborated with his son, Keith, in designing the Wayfarer World, an all GRP version with a self-draining cockpit and a removable aft storage tank, which allowed for transom flaps and facilitated drainage after a capsize, and a spinnaker chute.

The latest incarnation, the Mark IV, was introduced in 2007, when all other earlier designs, except the “World” and “World S”, ceased production. The redesign was carried out at the commission of the Wayfarer class association by the former successful racing helmsman and dinghy designer Phil Morrison. His brief was to update the design for the current generation, to take advantage of modern production techniques and to modernise the internal layout. Morrison looked at all the variations that had occurred in the class rules since its introduction as well as examining those boats and features that had proved successful on the racing circuit. The result has been a boat with a more spacious internal layout, easier to right and drain, which has served to give the class a new lease of life.

Because of the way in which the class rules have ensured that older boats can remain competitive with newer derivations, Wayfarers tend to maintain strong second hand values and remain popular boats among dinghy sailors. Racers generally prefer the stiffer hulls of wooden or foam sandwich construction boats (the “Plus S” or “World S” variants), while cruisers and day sailors tend to prefer the greater storage facilities in the Mark I or II, or the later “World” design.