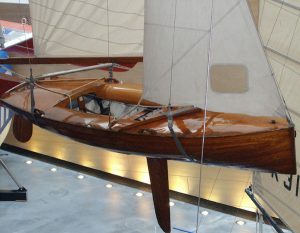 This is the original Merlin Class Dinghy as built by Jack Holt in 1945 for the Ranelagh Sailing Club in West London; it is from this model that many of the wide-beamed and hi-tech Merlin-Rockets, familiar to so many competitive dinghy sailors, have developed over the last 40 years.

The idea for Britain’s first post-war sailing dinghy was hatched by a small syndicate of members from this sailing club and amongst them was the well-know designer, Jack Holt, the builder of so many successful dinghy classes including the International Enterprise (E1 is also part of the museum’s collection), Heron, British Moth, Solo, Cadet, Hornet, Flying Ten, Lazy E, Prelude, Streaker, Mirror (No.1 of which is also in the Museum’s collection) and many more.

Many of the features incorporated into the Merlin were extremely advanced for the 1940s – the hull was made using the new marine plywood developed during the war and was long enough (14 ft) to plane easily. The ‘roll’ decks enabled the boat to heel without filling and sail area was a size that would encourage female crews and the boat could be easily handled in and out of the water in the days before launching trolleys.

The Merlin Class Association was launched in 1946, and by 1951 the Merlins merged with the Rocket Class to form the National Merlin-Rocket Class. The class was popular with both coastal and inland sailors; by 1959 sail numbers had passed 1000 and by 1968 the new material of GRP had been approved and changes to the Rule have radically altered the shape of the latest boats.

Our Merlin last sailed in 1969 and was presented to the National Maritime Museum Greenwich in 1971 by Mr Beecher Moore, another member of the original Merlin syndicate of 1945 and a friend and business partner of Jack Holt.