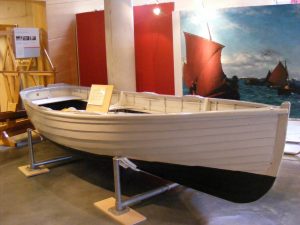 Rose of Portloe is a Cornish crabber. The term “crabber” covered all boats which fished with pots for crabs, lobsters and crayfish.

They were small, well-built craft, with good load carrying and seakeeping abilities.

Crabbers, then as now, worked out of most of the Cornish coves, from Seaton, near Looe, and Gorran Haven, in the southeast, to Port Isaac and Boscastle in the northeast, although most were situated in south and west Cornwall.  Some coves, such as Penberth and Cadgwith, had a communal capstan, perhaps owned by the landlord, for hauling up the boats.  The coves were situated near the fishing grounds as pots had to be lifted at least once a day.

The men who sailed small working boats also had to fit out, maintain and repair them. The gear had to be simple and cheap, the boats had to be roomy enough to hold a decent catch, stable enough to be worked in, and not capsize in a rough sea.
The boats were not randomly built, but conceived and designed for specific purposes. Very often plans and models would not be used, rather the skill of the boatbuilder and the experience of the fisherman would be combined to produce the finished craft.

Rose was built for Mr. Benjamin Blamey Johns in 1904 by Arthur Johns, the Portloe boatbuilder, for £7. Arthur was 70 years old when he built her, and this was his last boat. In the early 20th century there were about 18 of this type of boat based at Portloe, ranging in length from 14ft to17ft.

Rose was built for sailing, her rig being two unstayed masts. The fore had a dipping lug and the mizzen a sprit or a standing lug, both with outriggers. Her underwater shape indicates that she would have sailed well without being unpredictable. Her lightness of build is somewhat unusual for a working boat which would have been subjected to some harsh treatment. She was a special boat built for an older man to suit his advanced years and experience.

Mr. B B Johns died in 1911, aged 69, and Rose was stored in a cellar at Tretheake Manor, on Cornwall’s Roseland Peninsula, until 1972. She was acquired by the National Maritime Museum Greenwich in 1974.