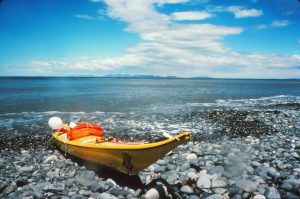 In 1975 four members of the British Kayak Expedition completed a journey from Bodo to Nordkapp in Northern Norway, Europe’s most northerly point. Their chosen craft for this pioneering expedition was a kayak designed by Frank Goodman – the Nordkapp.

The 480 mile journey, which took a month to complete, was undertaken through the worst summer in Norway since records began, but the kayaks performed excellently in the difficult conditions.

The expedition needed a boat that was reasonably fast, capable of carrying 90 kg and, above all, was able to maintain its performance in extreme weather conditions.

There were a number of features that, although commonplace now, were unique to the Nordkapp design including:

Although similar-looking to an Inuit kayak, the Norkapp was designed from Frank Goodman’s own experience of paddling kayaks on the sea and in surf, coupled with hydrodynamic knowledge gained from his slalom kayak designs.

The members of the Nordkapp expedition made a thorough and detailed record of all their findings, from design and modification of the kayaks through to a detailed journal of the expedition itself, and the lessons learned from it enabled longer and more hazardous journeys to be undertaken, including the first rounding of the notorious Cape Horn by kayak in 1977 when Frank Goodman, together with three colleagues, completed a three week, 250 mile voyage.