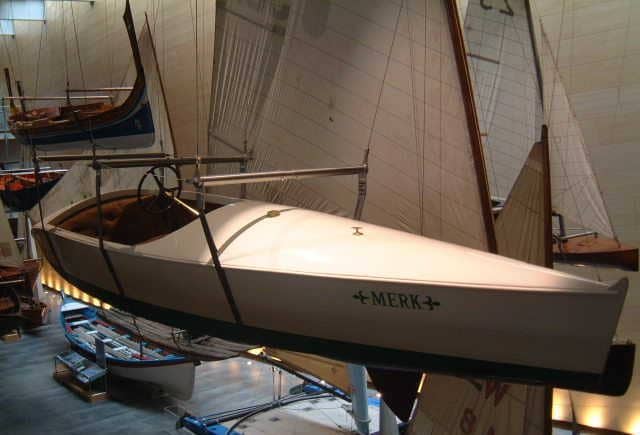 By the late 19th century boating and picnics on, or near, the river were gaining in popularity and social events such as the Henley Regatta saw large gatherings of pleasure boats.The participation of the newly developed motorboat only increased this further.

Merk is the prototype ‘slipper’ launch built in 1912 for hire on the River Thames. With her graceful design resembling the heel of a slipper, Merk was quite unlike anything else on the water. She is a simple wood construction with straight stem, flat sides and flat bottom all designed to reduce wash – echoing the design racing cars of the day.

Designed to be a ‘motorist’s boat’ she of course comes from an era when very few people actually owned a car. In 1910 only 1 in 600 households had a car and even by 1940 it was still only 1 in 24 (Today it is more likely to be around 1 in 2). She was fitted originally with a single-cylinder Waterman engine that used petrol (superseding the steam boats of the previous generation); she had bench seats and even a steering wheel rather than a tiller. Indeed most of her interior, from the dashboard to the gearbox, fitted with a reverse gear for easy manoeuvrability, was made to be as car-like as possible. Such was Merk’s success her design was further developed into a range of motor launches called the Greyhound. Aimed initially at the luxury market, using the rapidly developing Watermota engine, their controls were identical to a contemporary car, as was their handling.

Despite the fact that the cost of buying one of these craft was well beyond the ordinary man, these launches quickly became prolific on the upper reaches of the Thames, particularly between Reading and Henley where large fleets were readily available for hire. They were also popular with foreign visitors and they were exported extensively to be used throughout Europe’s many lakes and rivers.

Merk was actually bought by Arthur Whitten-Brown, he of course was not only well known for his style and society living, but also with John Alcock. Together they became household names after successfully becoming the first to navigate the transatlantic by flight; it is said that he even called the craft Merk after his much loved Mercedes car. The Maidenhead Advertiser went so far as to describe the list of owners of these craft as ‘looking like Debretts or Who’s Who!’ and perhaps one of the most famous, or maybe notorious owners was Louis Renault, the French car manufacturer who ordered a 30’ version and placed a 100hp Renault engine on the back making it capable of speeds of up to 37 mph on the Seine…unfortunately there are no records of just how popular this must have made him with other river users!