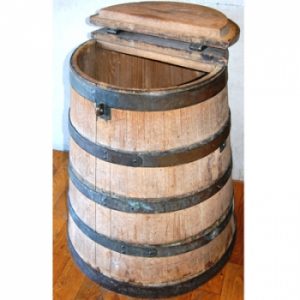 As Falmouth celebrates the annual Falmouth Oyster festival, marking the beginning of the oyster harvesting season, it seems an appropriate time to consider what types of food were consumed on sea voyages. Keeping food fresh on long journeys was not easy. Prior to the introduction of lime and lemon juice for sailors the nutrition of seafarers was not ideal, especially on long journeys. Livestock were taken aboard ships and could be slaughtered as necessary, but it was always as well to take on provisions which would keep reasonably well. Supplies of fresh fruit and vegetables would run out within a few weeks.

Before refrigeration became common food had to be preserved using salt. Containers such as this pork cask were half filled with water, salt and saltpetre to keep the meat fresh. Other forms of preservation could include smoking and pickling, but these would usually be done ashore and the preserved provisions then taken aboard ship.

Seafarers ate the salted beef and pork, supplemented with fish, cheese, ship’s biscuit and ale. The quality of the food deteriorated as the journey wore on. There were problems with storage, lack of ventilation and poor drainage. There were also rats and vermin, maggots and weevils, which ate their way through provisions. Tapping biscuits prior to eating them would knock the beetles out.

Captain Cook is credited with combating scurvy by encouraging crew to consume citrus fruit and juice, which is why there was little incidence of scurvy on board long voyages to the Pacific. Often the men had to be forced to consume fruit. Scurvy also affected poor labourers working on the land, particularly during the winter when fresh food was scarce.

Tinned food revolutionised eating habits. The tin can was patented in 1810 by Peter Durand, based on the work of Frenchman, Nicholas Appert. From 1813 canned goods were used in the British Army. They were sealed with lead soldering, which did contribute to lead poisoning. Canned food was particularly popular during the war time periods of the 19th century and demand rocketed during WW1. It is said that an army marches on its stomach and this stomach could be usefully supplied with tinned foods when fresh food was not readily available.

This cask was recovered from Sennen around the time of WW1. This shows that although canned produce was more common the legacy of previous methods of food preservation and storage continued. The cask is said to have been washed up from a ship wrecked on the coast of Cornwall and was kept for many years before it was given to the museum collections. It is now on display in the Cornwall and the Sea gallery where it is appreciated by many visitors.

A Royal seal of approval: 350 years of Falmouth
A ‘fragrantly’ fishy business