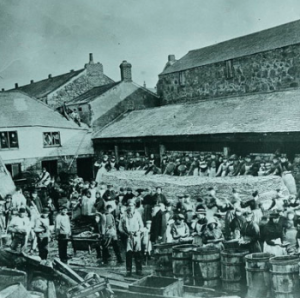 “Pilchards! Whose bodies yield the fragrant oil and make the London lamps at midnight smile!” Peter Pindar 1783 (Pen name of John Wolcot, 1738-1819, who achieved fame in the 1780s for his comic and satirical verse).

Cornwall once relied upon the sea for nearly everything: food, transport, trade, defence and contact with the outside world. Fishing was always a vital part of the Cornish way of life and in the 18th and 19th Century, pilchard fishing was a major industry. Throughout the summer months large shoals of pilchards were caught off the Cornish coast; then they were taken to pilchard cellars for processing.

Salt (from France and Portugal) was spread on the floor of the cellar, then fish and more salt were added in layers until a ‘bulk’ about 4ft in height was formed. Over 30 to 40 days the blood and oil seeped away to be collected and sold. After this was done the bulks were ‘broken’, washed in troughs of seawater and placed in circular layers in ‘hogsheads’ (straight sided barrels packed with 3,000 pilchards and designed to leak). A ‘buckler’ or lid was then placed on the barrel and a 13ft pole, embedded in a wall at one end and with a heavy weight attached to the other was then pressed down onto the lid. The pilchards were squeezed flat and oil drained out; producing 18 to 45 litres from each barrel. The oil was mostly sold as lamp oil, which covered all costs of production. The fish was purchased almost exclusively by Italian Catholics for religious fasting. The sale of this was all profit.

It was in buildings such as these in this photograph of St Ives in 1871, that the work was carried out. The complete cellar was usually an open courtyard surrounded on three sides by low buildings with overhanging roofs. The hogsheads stood over a gutter in the floor leading to the oil pit; holes in the wall would provide the support for the poles and the floor was cobbled so the oil and water would flow in channels.

By the end of the 19th Century ‘bulk curing’ had been replaced by the use of brine tanks and the pole presses by more efficient screw presses. In the 1920s most cellars had disappeared. The few that survive today have been converted into houses, restaurants and shops. Pilchard fishing declined from the mid-20th Century, although small quantities of pilchards are still caught in Cornish waters today.

Our Cornish Quayside gallery brings to life the story of fishing around Cornwall and is a permanent exhibition on the ground floor of the museum.