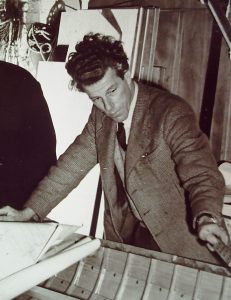 Jack Holt was one of the boating world’s most prolific and influential designers. In a career spanning more than 60 years his designs fostered an explosion of home and professionally built craft, making it possible for people who previously found sailing unaffordable to get on the water.

John Lapworth Holt was born the son of a panel beater in Hammersmith on April 12th, 1912.  His early skills with wood developed when he studied cabinet making at Shoreditch Technical College at the age of fourteen.  Having cut his sailing teeth in Winnie, a small lugger bought from AP Herbert, he started to build boats after a motorcycling accident, which took many years to recover from and left him very short of money.  He built an 18ft clinker dinghy, Candlelight, which he raced successfully, thus bringing him further business opportunities.

In the years following World War II people began taking to the water in much greater numbers than before, and by utilising wartime technology boat developers were able to provide a new range of affordable boats. By this time people in the sailing world were beginning to take a professional interest in Jack’s designs.  One man who played an important part in Jack’s career was Group Captain Haylock, Editor of Yachting World, who encouraged Jack and published some of his designs in the magazine,

Jack Holt met businessman Beecher Moore at Cowes when they were competing against each other in the International 14 Class. Moore was impressed by Jack’s advanced designs which won many races in the class in the late 1930s.  A colourful character, Moore caused a stir among boat owners when he fitted a rope and a belt to the mast of his Thames A Rater to enable his crew, Peter Scott, to stand on the gunwale and lean out, thus creating the forerunner of the trapeze.  He was also rumoured to be a friend of Christine Keeler and one of the unnamed men in the Profumo Affair, a political sex and spy scandal of the 1960s.

Beecher Moore helped Jack to exploit his considerable design and building talents by handling the business side of Jack Holt Ltd. Determined to bring small boat sailing to the masses, together they embarked on a high ly successful partnership.  In the next thirty years Jack produced a string of designs. His aim was to encourage more people to take up the sport of sailing, reducing the cost of buying a boat by making many of them available in kit form.

His boats included the Cadet, GP14, Heron, Solo and Enterprise, all of which were designed to provide some exciting sailing. His most famous boat is the Mirror dinghy, sponsored by the Daily Mirror newspaper in 1963 with the help of TV’s DIY celebrity Barry Bucknell, and whose numbers now exceed 70,000. He employed well proven stitch and glue construction techniques to produce a boat which was practical and easy to build and sail.