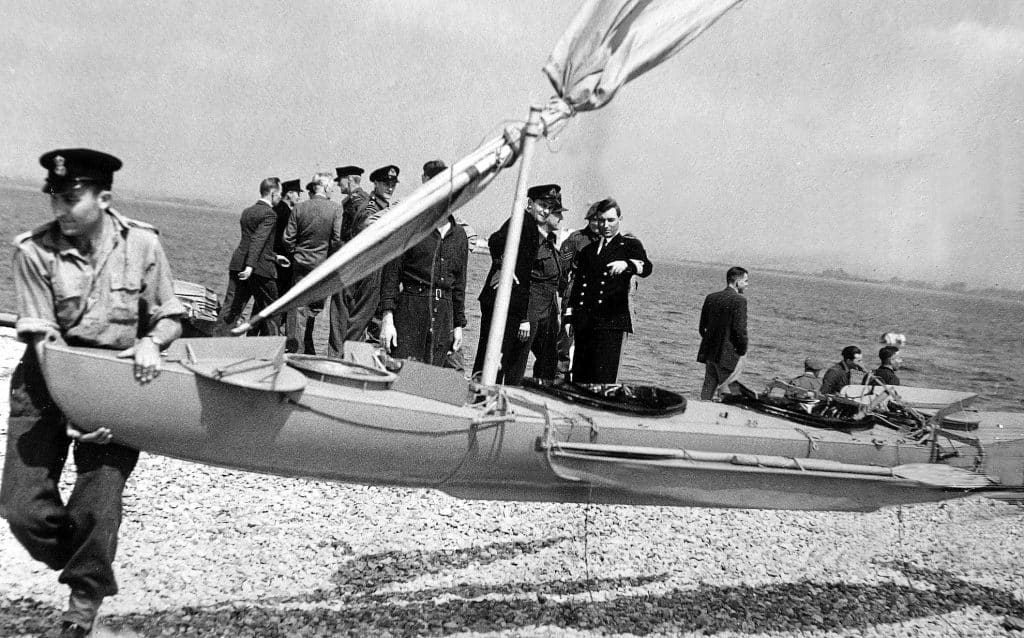 In the years leading up to the Second World War, the British war office recognised a need for a small boat that could be used for covert reconnaissance and assault operations.

Such a craft needed to be both small and inconspicuous as well as to be readily transportable, in as compact a space as possible. In response to this Mr. Fred Goatley, then working for Saunders Roe, the aero and marine engineering company based on the Isle of Wight, designed what was to become the first in a long line of canoes, or more properly kayaks, which would be used extensively in various theatres of war. Most famously these craft featured in the Cockleshell Heroes Frankton raid on enemy shipping moored in Bordeaux harbour in December 1942 led by Major (later Lieutenant Colonel) “Blondie” Hasler, later known for his development of self-steering gear for yachts.

The model used in the Frankton raid was the Mark II, and was made of plywood, as were subsequent versions up to and including the Mark VI. The Mark VII, VIII and IX versions were constructed in alloy, especially for use in the Middle and Far East, after plywood versions were found unsuitable for tropical conditions with sharp, hard coral and attack from wood boring beetles and other bugs.

A considerable amount of both variety and ingenuity went into the design and use of these craft. They were constructed for use solo, but also for crews of two, three, or four. Propulsion methods included conventional kayak paddles, but also pedals, sails, and later versions experimented with engines, either battery or petrol powered. Some were fitted with outriggers or inflatable sponsons to improve stability. One powered version was even designed to operate in submersible mode. They could be transported by submarines, destroyers, motor torpedo boats, and long range Catalina flying boats.

The museum’s example is a Mark VII non-motorised version, equipped for sailing. It is constructed in aluminium alloy, riveted to aluminium frames, utilising expertise from the aircraft industry. The hull consists of three sections, each with a watertight bulkhead; this made them easier to be loaded through the hatch of a submarine, whereas some earlier versions had had to be carried in the torpedo tubes. Pintles were fitted at each end of the keel of the centre section over which eyes on the end sections slotted. The sections were then secured together by pins inserted at deck level. The end sections were fitted with watertight hatches to access storage beneath. Additional stability was added by two hollow outriggers filled with table tennis balls, and in some craft the end sections were similarly filled. A lifting plywood rudder facilitated use in shallow water and beaching. Examples used in Burma are known to have incorporated a universal machine gun mounting. Some 200 of these craft were ordered for service in the Far East, with some used operationally before the end of the war.

It is known that the Mark VII was used for training purposes until disposal was deemed necessary. By 1954 it was regarded as obsolete and was superseded. Some were subsequently disposed of as surplus and ended in scrap yards. A few entered private ownership. A number of examples still exist though very few are seaworthy and even fewer retain original features/accessories.

This featured boat article drew heavily on Quentin Rees’ book, The Cockleshell Canoes – British Military Canoes of World War Two, where much additional information and history on these craft can be found.