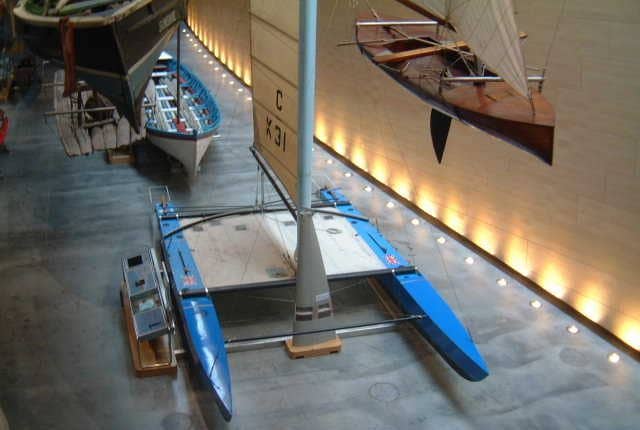 The International C Class Catamaran Championship is one of the sailing world’s legendary and amongst the most eagerly anticipated events.

In 2013, for the first time since 1969, the championship was held in Britain, with the racing taking place in Falmouth Bay in September. Teams from Canada, France, Great Britain, Portugal, Spain, Switzerland and the USA all took part in the competition, which is now held every three years.

C Class catamarans are 25 feet long, 14 feet wide and have a sail area of no more than 300 square feet with the measured sail area including both the area of the mast and boom. They have a crew of two with a single trapeze, mirror image hulls and no minimum weight restrictions. The C Class has led the way in the development of high speed sailing, in particular the use of rigid ‘wings’ rather than cloth sails. The wings have variable control surfaces like aircraft wings. These give unusually good performance, which is often double the wind speed. At least six of the boats which competed in 2013 were newly built since the previous competition in 2010 and featured hydrofoils, capable of lifting the hulls clear of the water for additional speed of somewhere in the region of 30 knots. These are among the most advanced sailing boats in the World, their revolutionary designs created by the most innovative yacht designers. The C Class championship is an opportunity to showcase technological advances in sailboat design.

Lady Helmsman, was built in 1966 and was a revolutionary high speed sailing craft of her day. Designed by Rod McAlpine-Downie and Austin Farrar and built by Reg White, Lady Helmsman could travel at an extraordinary speeds – over nine knots under mast alone, and was hailed as the ‘fastest sailing boat in the world’. Unlike a traditional mast, the wing mast is an aerofoil shape which operates as part of the sail. It is much broader and follows the cut of the sail allowing wind to flow smoothly across it. This increases the sail’s surface area, improves its shape and the vessel’s speed. The una rig means she has only one sail and does not carry a jib. Lady Helmsman was also one of the earliest boats to use modern construction techniques such as cellular foam and plywood which helped to make the boat extremely light. She is also immensely successful having won the International Catamaran Challenge Trophy three years in succession from 1966 to 1968, and the trophy has not been won by a British team since.

The word catamaran comes from the Tamil words katta (to tie) and maram (log). Such vessels are common in Polynesia and Hawaii, but weren’t commonly used for racing until after World War II.