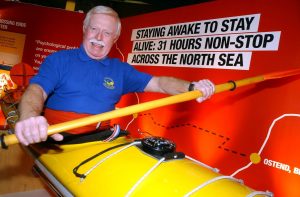 This was to be the first recorded unsupported West-East crossing of the North Sea by kayak.

In August 1975, Hutchinson, a school teacher by profession, led his first attempt to make an unsupported crossing of the North Sea. After 34 hours of constant paddling and no sleep, hallucinations and nausea forced them to abandon the crossing. They were rescued by a passing ship, but only as they used up their last distress flare.

In June 1976, relying on charts showing tidal streams, a compass and dead reckoning the team completed the route and stuck remarkably to the planned route, ending exactly where they planned. The team decided that Hutchinson should be the first to land, as he was the inspiration behind the attempt and the designer of the three kayaks used by the team.

The Museum kayak was the prototype model, and used by Hutchinson on the attempt. This kayak was to prove the inspiration for all modern day sea kayaks. Revolutionary features include water-tight compartments, with access via watertight deck hatches, plus grab lines and elastic shock cords stretched across the deck to hold a chart and compass. A radar reflector on the stern, water-tight canisters to hold distress flares, additional tow-lines and a self bailer are also fitted. The paddle design, the Seamaster, is still produced today.

The size of this kayak, 16ft long and 21ins wide, was dictated by the length of Hutchinson’s garage. Derek is regarded as the father of modern day sea kayaking: although a controversial and outspoken figure he contributed much to the development of sea kayaking in the UK and was responsible for the emergence of the sport in the USA, and was still designing kayaks until his death in 2012. He wrote a number of books about kayaking, including what is considered by some the ultimate textbook on kayaking.