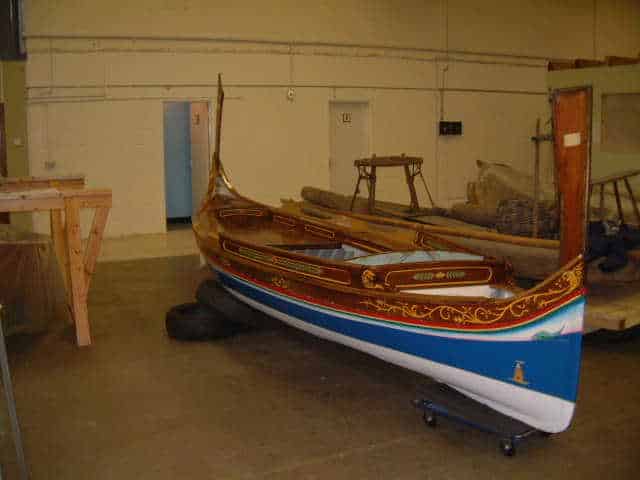 The Dghaisa has been the chief work boat of Malta for centuries and its origins can be traced back thousands of years.

High ended boats such as these have been found in palace wall carvings from ancient Iraq. Older paintings of dghaisas show they have changed little over the last 400 years, although it was during the 19th century that the highly ornate decoration began to appear, including patriotic carvings of Britannia and St George.

The boats are propelled by one or two men with oars which they stand and push instead of sitting and pulling. Their shape and design is almost exclusive to these islands. The builders and owners are very proud of their craft and go to great lengths to embellish and decorate their boats. This boat also has many carved and joined panels added to the gunwales and interior.

As a major strategic base from 1799 Malta was of huge importance to Britain and the harbour at Valetta played host to hundreds of British warships and personnel. Dghaisas were used as water taxis and resupply vessels. Some warships even kept their own dghaisa on board. The boats were regulated and licensed and the crew wore official badges. The men who operated the boats formed a close knit community, often handing licences and boats from father to son. In 1930 there were over 1300 registered dghaisa crew registered in the Grand Harbour at Valletta, almost half of them working for the Royal Navy.

When British Ships finally left Malta in 1979 the days of the dghaisa as a working boat ended. Like many traditional working boats the dghaisa has been given a new lease of life as a racing and leisure craft. An annual regatta is held in the Grand Harbour, where the dghaisas compete against each other over a 1000 metre course. Each boat must conform to strict regulations on size, shape and weight and the boats are blessed by a priest before competing.

This boat, Verdala, was built in 1870 and owned by the Garscia family of Gozo before being purchased by Captain Harris of the Royal Navy in 1974.