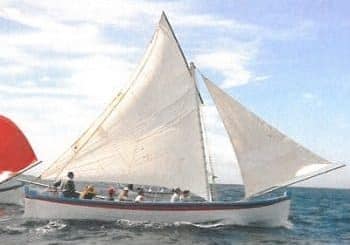 In 1961 the entire population of a tiny island was evacuated after its dormant volcano erupted.

Situated in the South Atlantic 1500 miles west of Cape Town and 1800 miles east of Argentina the island – almost unknown in this country – was Tristan da Cunha. Claimed by the British in 1816, the island was occupied by a small garrison due to concern that it could be used to aid the escape of Napoleon Bonaparte, who had been exiled to St Helena.

The 30ft longboats used on Tristan were well adapted to the harsh environment of the South Atlantic. Timber is scarce on the island, and often consists of driftwood bleached and bent by frequent gales. A mixture of driftwood and some local timber was used for building the framework of these vessels. This wood was covered in oiled canvas to form a light, strong boat capable of coping with the South Atlantic swells, yet easily hauled ashore when the weather became too rough for sailing.

The longboats were used for fishing, meeting and trading with visiting ships, catching crayfish and for expeditions to the outlying island of the Tristan Group, such as Inaccessible and Nightingale Islands.

The construction of a longboat was a community affair. When an islander decided to build a boat he requested help from his neighbours, who were paid in kind with items such as meat, potatoes grown on the Potato Patches and fish.

Although the longboats were traditionally powered by sail and oar, glass fibre motor boats have now taken over. With the creation of Calshot Harbour in the 1960s, islanders are able to launch their vessels in most weathers.

The Museum boat, Carlisle, was named after the Royal Navy ship HMS Carlisle, which made visits to the island in 1932 and 1937 to study the welfare of the inhabitants. It was presented at Buckingham Palace to The Queen by the islanders after their evacuation, and is believed to be the only remaining traditionally built example in existence.

Despite the view they would settle in England after their evacuation, the homesick islanders returned to live on Tristan da Cunha when they discovered the volcano was safe. Total population is about 270 and the only way to reach this remote island is still by boat or ship.

Aground on Castle Beach
Challenger Trimaran #1 – BC26