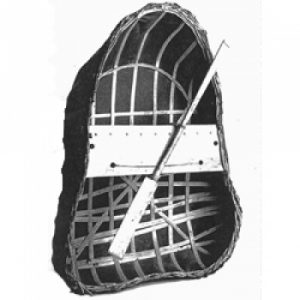 At first glance a coracle seems a rather unlikely water craft, with no discernible bow or stern, and a strangely shaped paddle for propulsion. But they have stood the test of time as working boats: made from locally sourced materials, cheap to build, light-weight for ease of carrying, and a draft of only a few inches for working in shallow waters and easy beaching.

Coracles (from the welsh word “cwrwgl”) have a history dating back thousands of years. They have been used in various countries, and in the British Isles from pre-Roman times.

The frame is made from a basketwork of ash, willow or hazel which would originally have been covered with animal hide, but is now more likely to be bitumen-coated canvas. One paddle would steer and propel the boat,

Although their main use is now confined to fishing and leisure, they have also been used as ferries, and for covert military operations.

Even St Piran, the patron saint of Cornwall, is reputed to have made the crossing from Ireland to Cornwall in a coracle. This may have been quite possible, as, in 1974, welshman Bernard Thomas crossed the English Channel in a coracle in 13 hours.

This coracle comes from the River Teifi, and would have been used as one of a pair for salmon or Sewin (sea trout) fishing.