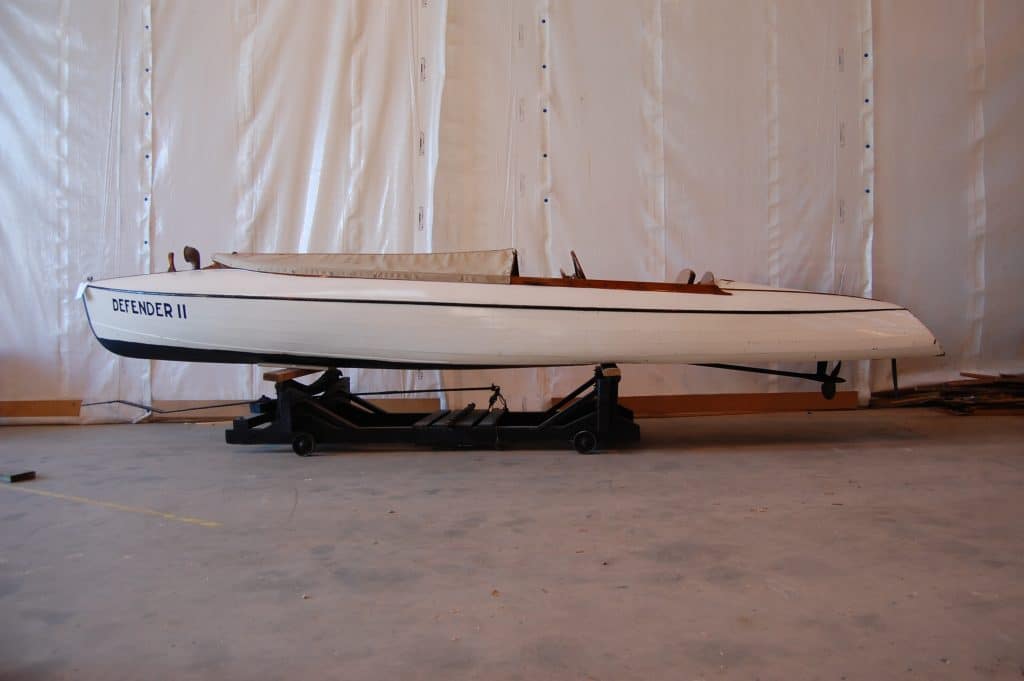 Speed on the water is as desirable as it is on land. In the early 20th century a new breed of propulsion, the internal combustion engine, enabled boats to go faster than less efficient and heavy steam engines would allow.

The romantic steam launch with its stoker gave way to the more dashing launches, which the owner could drive without the need for a crew.

Acquired by the Museum in 2010, Defender II was built in 1908 for Mr Fred May. His interest in powered craft dates back to 1896 when he had a 2 ton launch built for him at Chiswick, London. Fitted with a 3 horsepower steam engine she had a top speed of 7 miles per hour.

After owning a number of boats Fred May became fascinated by the growing sport of power boat racing. Defender II was one of the first of a new breed of power boat, the un-stepped hydroplane. Her hull shape, long and thin combined with her light weight, is typical of its day, but by this time designers were beginning to experiment more with the underwater profile.

Below the waterline Defender II’s hull is fairly conventional at the bow, but almost immediately flattens out as it runs aft, becoming virtually hollow at the stern. This allows the boat to sit more on the water than in it when under power, thus reducing drag and increasing speed.

After the installation of a more powerful engine in 1909 Defender II reached a top speed of 17 miles per hour, an impressive figure at the time. By 1931, well advanced in years, this racing machine was achieving speeds of over 30 miles per hour, thanks to a 4.5 litre petrol engine, with Fred May still at the helm. The popularity of racing encouraged people to use more powerful engines. Hulls were made narrower to reduce drag, until they became unstable at any meaningful speed.

During the 1930s boat designer Adolph Apel, rather than build narrow hulls, added floats to each side of a wide deck to restore stability. This produced the forerunner of the modern hydroplane, the three-pointer. Greater stability and even less hull in the water, coupled with increasingly powerful engines, enabled Apel’s boats to achieve speeds in excess of 60 miles per hour.