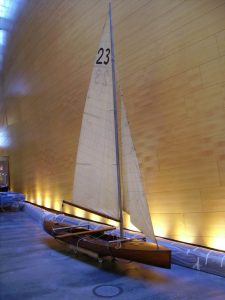 Defiant’s long thin hull minimises drag allowing her to plane along at high speeds but, being narrow, it can easily tip over.

The sliding seat allows the helmsman to sit out and thus balance the pressure of the wind on the sails, which at 10 sq. m. deliver a great deal of driving force. Sailing a canoe is an awesome experience for downwind she is capable of achieving some seriously high speeds. Therefore great agility and strength is required to prevent capsizing.

Like all Uffa Fox’s racing dinghies, Defiant has Canadian Rock Elm ribs (which Uffa used to boil rather than steam to make them soft and bendy), double-skinned planking, laid diagonally in the inner layer, then covered with an oil silk layer covered with outer planking laid fore-and-aft.

The New York Canoe Club instituted the International Cup in 1886 but Defiant is historically interesting because she was the first canoe to be designed and built after the Royal Canoe Club of Britain and the American Canoe Association had agreed on an International Rule combing the best features of both countries’ racing in 1933. So clever was her design that she was virtually unbeatable for the first five years and she was still capable of winning trophies 14 years later.

Uffa Fox (1898-1972) was probably the greatest small boat designer of the first half of the 20th Century. A boatbuilder by trade he began designing in the 1920s and continued until his death. Other examples of his work include Thunder and Lightening, National 12s, Firefly, Albacore, Jolly Boat, Duckling and the Flying series: Flying Ten to Flying Fifty. Also the Airborne Liferaft, Britannia and Britannia II.