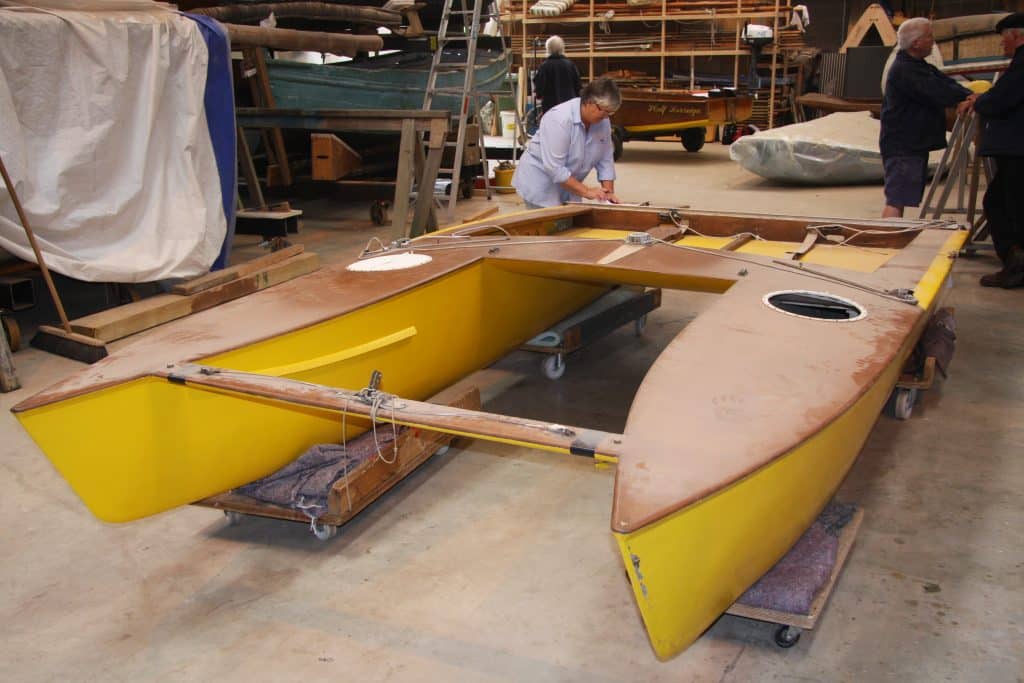 The firm, G. Prout and Sons, was formed by Mr Geoffrey Prout and his sons, Roland and Francis, in 1935.

The Company originally specialised in building canoes and folding dinghies as yacht tenders, but after the war they opened a small factory on Canvey Island, in Essex. The firm grew and hundreds of folding dinghies and canoes were sold all over the world.

In the late 1940s Roland and Francis started experimenting with two canoes lashed together to make their first catamaran; however at this time their main passion was for canoe racing (they were champions in kayaks) and were picked to represent Britain in the 1952 Olympics. Later, they began to carry out more serious catamaran experiments, this time using racing kayaks tied together with a bamboo platform; to this they rigged a lugsail and the jib from an International 14 dinghy. The result was so successful the brothers decided to design and purpose build a catamaran. This catamaran was known as Shearwater 1, it raced locally and won every race. In 1954 the boat was entered in a “D” class handicap in the Burnham-on-Crouch annual regatta week, and won outright.

Lots of interest in catamarans was being generated so as a result meetings were held with other boat designers; this ultimately led to the Prouts designing the smaller and more easily trailed Shearwater III, and Bill O’Brien designing the hard-chined Jumpahead. Roland and Francis entered the No I Shearwater III in the first Cross-Channel Dinghy Race from Folkestone to Boulogne in 1956, and beat all the best racing dinghy helmsmen of the day (which included Uffa Fox) by over one hour. The resulting publicity created by this win ensured the success of the Shearwater III.

The Shearwater III was the world’s first production catamaran with sail numbers now over 2000. The class predated and spawned all other types and, although seeming rather strange in the 1950s and ‘60s, it represented the best in catamaran design before the Dart and received Royal Yachting Association recognition by 1959. Yellow Bird itself was raced by the Prout brothers and won national championships. The Shearwater is still a potent performer and capable of beating newer designs on handicap despite the design being over 40 years old. This is a result of the Shearwater being a restricted class, so allowing it to be developed and to benefit from new ideas and not be limited by one-design rules.