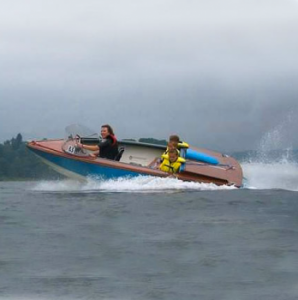 The story of Donald Campbell’s death on Coniston Water, whilst attempting the world water speed record in Bluebird, is well documented. Less well known is that, up to the time of his death in 1967, Campbell was commercially developing a 13ft (4m) fast runabout, using the latest water jet technology. The prototype craft Jetstar was conceived by Donald Campbell as a means of producing a pleasure boat that would reduce the risk of injury from normal propeller driven craft, by using water jet power.

During the 1966/67 world water speed record attempt, Campbell used the Jetstar as a personal runabout on Lake Coniston. He would take journalists for promotional trips, and entertain the crowds on days when Bluebird could not run. The team also used the boat to evaluate Bluebird at close quarters whilst under way. Campbell had planned to promote the Jetstar alongside a world record-beating Bluebird at the 1967 London Boat Show. The show opened on 5th January – but on 4th January Bluebird crashed, and Campbell was killed.

After Donald Campbell’s death, a fibreglass version of the Jetstar was produced by the Norris Brothers in moderate numbers, at a selling price of £1200, a much higher cost than an equivalent propeller driven boat. The Jetstar hull was designed by Peter Milne. It is of cold moulded timber construction, fitted with an 80hp V4 Evinrude power head, installed on its side and linked to a Hamilton Jet-drive intake. From there it leads to the jet outlet, through which the flow of water is directed, with a system of flaps incorporated to control boat speed.