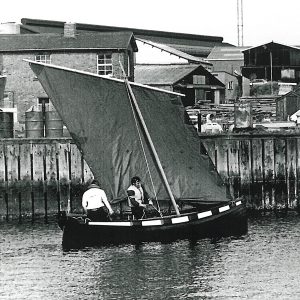 Foyboats and boatmen have been traditionally associated with the rivers of Britain’s north east coast for at least three hundred years.

Throughout the age of sail their main task, undertaken for an agreed fee (foy), was to tow or kedge-haul sailing vessels in and out of the river estuaries during periods of calm or contrary winds.

In the 19th century, with the coming of steam tugs and steam screw colliers, foyboatmen were almost entirely employed mooring and unmooring ships at coal staiths, buoys, quays and docks.
Competition for work was very keen, the foyboats travelling many miles out to sea “seeking” incoming ships.

On the river Tyne a special type of boat evolved to suit the foyboatman’s needs. It was about 17ft (5.2m) long, of very narrow beam and heavily built to withstand the knocks of mooring work. Under a dipping lug sail the foyboat’s performance was not exceptional, but under oar it was a different matter and became an excellent rowing boat.

Until about 1930 such boats were only built by a few specialist builders in the area of North and South Shields, where the foyboating community lived. After that date the use of sail and oar declined rapidly in favour of engine power.

Ethel was built in about 1907 by Clarkson of North Shields and was in regular use until about 1976. She was restored for the National Maritime Museum by Mr R Elsey of Whitburn, Tyne and Wear, being painted in the traditional style