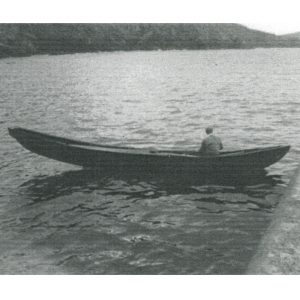 Curraghs are traditional Irish boats, unique to that part of the world.

Built around strong wooden frames, their hulls are formed with waterproof canvas or leather. The curragh men, their communities and culture are celebrated in poetry, literature and song.

Tradition has it that St Brendan crossed a vast ocean in a hide-skinned curragh in the 6th Century, reaching what we now call America. This voyage was famously re-created by explorer Tim Severin in 1976.

Curraghs vary around the coast and each has its local characteristics. The Museum’s curragh is from the beautiful Dingle peninsula, which is from where St Brendan started his fabled crossing.

The double-ended shape of the boat makes it easy to launch and retrieve from a beach.

Lightly built, curraghs are used for fishing and ferrying goods and passengers. Their buoyancy and shallow draught permits them to ride safely over the rocky coastline, and their lightness of construction enables them to be beached and carried ashore above the surf line. Originally propelled by almost bladeless oars – avoiding the risk of “catching a crab” in heavy surf – they are now generally equipped with outboard engines.

In ancient times curraghs were reputed to have been used for raiding and waging war on other communities, including those of Wales and Cornwall. James Hornell, who in the 1930s carried out a meticulous survey of Irish Curraghs, records that “the curragh was the favourite vessel of the hoards of the plundering Irish who descended on the shores of Britain during Roman times and increasingly after….and were particularly active during the fourth, fifth and sixth centuries”

The present curragh on the west coast of Ireland has evolved in construction methods, coverings and length over the last century. As with the welsh coracle, skins of cow or horse hide have been replaced with coverings made from flax or canvas. Sawn ribs of American oak are used for the framework, which is nailed together rather than tied with leather lashings. Outboard wells are also part of the construction.