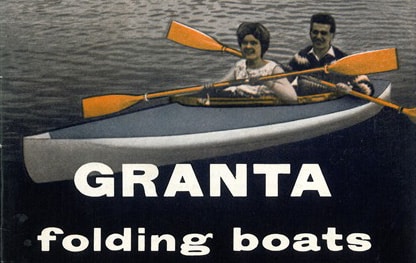 Granta, a British firm, was established in 1932. Between that time and the 1960s it sold thousands of canoes and kayaks from a range which peaked at 48 models.

A number of its boats were built as folding models, probably to compete with the likes of German Klepper canoes. As the company’s publicity material proudly boasted: “the Granta Boats….have proved themselves in the icy turbulence of the bleak Arctic and the blistering heat of Central Africa; added to which, used by Commandos, not a day passed in 1944 but one or more Granta boats crossed the English Channel to attack the enemy – this, and Lampedusa and Tobruk, prove its seaworthiness beyond question”.

What was certainly beyond question was that the average owner would not be mounting commando raids or going anywhere near Tobruk; however a great many of these craft were sold to owners who wanted the fun of setting out in a kayak with the convenience of being able to tow it behind a bicycle or carry it in the car.

The boat was assembled using a framework of wooden poles which fitted together like 1950s tent poles. A waterproof fabric cover was stretched over the frame to keep the water out and the paddlers in.

Granta folding boats were packed in two bags, and were quite fiddly and time consuming to assemble. They had many parts, some of which were fragile and required handling with care. The covers were prone to rot if not dried thoroughly, which rather contradicted Granta’s claim that their products were maintenance free.

The company sold a range of accessories designed to ensure that the owner would want for nothing when it came to canoeing and camping. These ranged from a tent sold for £10.5s 0d (£10.25), a trolley for £2, which was hitched to the back of a bicycle, to a flagstick – without spring – which retailed for 3 shillings (15p pence)

Grantas were undoubtedly popular during their day, but they became obsolete as public tastes changed in favour of more modern materials and designs. All that remains of “an industry employing 100 per cent British labour, British material and British capital” is a very small number of boats, with two of the folding variety in the Museum Boat Collection.