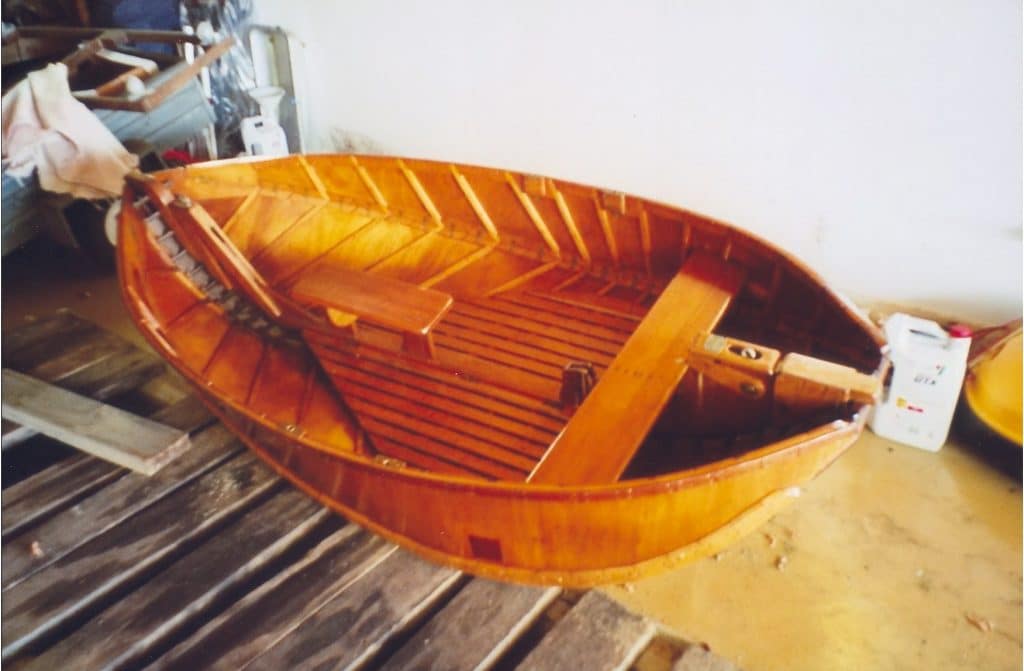 What you are looking at is cutting edge 1930s technology.What we have here is a Hudson Folding Dinghy, an unusual collapsible dinghy designed and made by R J Hudson (Dick) between the late 1920s and late 1930s, originally in Dublin and then in Devon

Dick started as a civil engineer in India before returning to Ireland in the 1920s then later, during the Second World War, he worked as part of a team on various development projects for the government.

The boat was designed to be simple with one person able to open and fold the boat in less than 30 seconds by means of a single leaver; the thwarts automatically taking their position upon opening so requiring no fixing. Its strength of construction was obtained from the rigid longitudinal frame consisting of stem, keel and sternpost. Specially prepared sheets of marine plywood were used for the planking and the entire boat was thoroughly sound and seaworthy with no fragile parts and no exposed canvas that could get chafed or damaged when in use.

Overall stability was helped by the broad beam and the craft was marketed as being most suitable for fishing, duck shooting and capable of safely riding even a heavy sea; indeed during the development phase the dinghy underwent trials in Dublin Bay to requirements suggested by the Admiralty and the Air Ministry, who were both keen on the design. In addition to the dinghy being fitted out for either rowing or sailing any small light-weight outboard engine with a usual transom bracket could be easily fitted.

For transportation the dinghy folded to approximately just 10 inches, ideal for stowing away on the deck of a small yacht or carried on simple brackets along the running board or on the roof of a car.