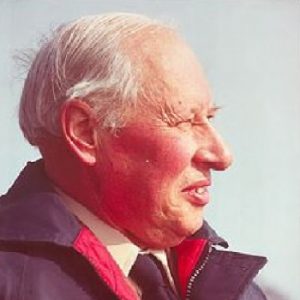 Ian Proctor (1918-1992) possibly did more to influence small boat design and small boat sailing than any other designer. His innovative designs and ideas in hull shape, mast design and manufacture, production methods, and yachting equipment modernised the whole concept of small boat sailing and made a vital contribution to the popularising of the sport. He designed over 100 different boats and was a fellow of the Royal Society of Arts and a Royal Designer for Industry, as well as being voted the Yachting Journalists Association’s Yachtsman of the Year in 1996.

Born in 1918, Ian Proctor learned to sail at his school in Norfolk and bought his first boat at the age of 18. At the age of 21 he was bought a National 12 by his parents as a birthday present, and the same year was elected Rear Commodore of his sailing club. He commenced studying medicine at the University of London but abandoned his studies to join the Royal Air Force Volunteer Reserve following the outbreak of war: he went on to command an air-sea rescue unit in the Mediterranean. In 1944, in Egypt, he contracted polio which left him with a paralysed right arm and damaged chest muscles.

Invalided out of the RAF in 1947, he worked for a while managing a Portsmouth boatyard but soon moved into journalism, becoming joint editor of the Yachting magazine, alongside the famous Adlard Coles. He subsequently went on to become the Daily Telegraph’s yachting correspondent for 14 years, as well as writing a number of books on dinghy sailing and maintenance.

Proctor’s disability did not hold him back from competing successfully at the top end of UK dinghy racing. He designed and raced successful versions of restricted class dinghies the National 12 and Merlin Rocket, winning the UK nationals in the latter in 1952, and soon found others seeking copies of his plans for themselves. A major competitor at this time, both on the water as a helmsman and off the water in seeking to achieve the best design, was that other prolific and innovative designer of the era, Jack Holt.

At this time most dinghies still had heavy wooden masts but in 1953 Proctor designed the first all-metal tapered and extruded aluminium mast for dinghies, allowing pre-bend in a mast and facilitating the fitting of sails with a pre-cut curved luff for better sail shape, as well as offering reduced weight aloft. He went on to establish Ian Proctor Metal Masts Ltd., which soon came to dominate the market for small-boat spars, and was later incorporated into the Selden group, still a leading producer of spars.

Proctor went on to produce a number of dinghy designs in the 1950s but his most enduringly successful creation from that era was the Wayfarer dinghy, recently covered in this series. It was the boat used by Frank Dye for his epic crossings of the North Sea, and by Frank and his wife Margaret for extensive dinghy cruising. Margaret was later instrumental in encouraging Proctor to develop a smaller and lighter version of the Wayfarer, which led in 1965 to the design of the Wanderer.

Closely preceding the creation of the Wanderer however, was that of the one-design boat that later became known as the Topper, an 11 foot single handed single sailed dinghy. Initially produced conventionally in glassfibre, in the mid 1970s the design came to be the first dinghy to be manufactured in injection moulded plastic, when sales took off. Although the Topper shares many characteristics with the Laser (also recently a Featured Boat) such as a shallow easily self-draining cockpit well, an unstayed mast and a single sleeved sail, it is much less demanding of its helm, requires less strength, and is more suitable for younger less experienced sailors, as well as being considerably cheaper. Around 50,000 Toppers have now been produced and are to be found in use in very many sailing schools, often alongside Wayfarers, though the design has not achieved either comparable overall sales or the same geographical spread as the Laser.

Despite his many successes Proctor also experienced disappointments. His Osprey design lost out to the Flying Dutchman in the competition to be the two handed dinghy class for the 1960 Olympics. Later, Proctor’s design of the two man keelboat, the Tempest, easily beat all competition for the introduction of a new Olympic keelboat to replace the ageing Star class, but despite the Tempest featuring in both the 1972 and 1976 games, for reasons that remain unclear the choice was made to revert to the Star from 1980 onwards.

Although better known for his dinghy designs and metal masts, Ian Proctor was also responsible for the design of several small cruisers beginning with the wooden Seagull 18, followed by the Seamew at 22 feet, and later by the still popular Nimrod, Pirate, Prelude, and Eclipse designs.

Ian Proctor died in 1992, poignantly while helping to launch a Wayfarer dinghy from the beach at Hayling Island in a world championship series.