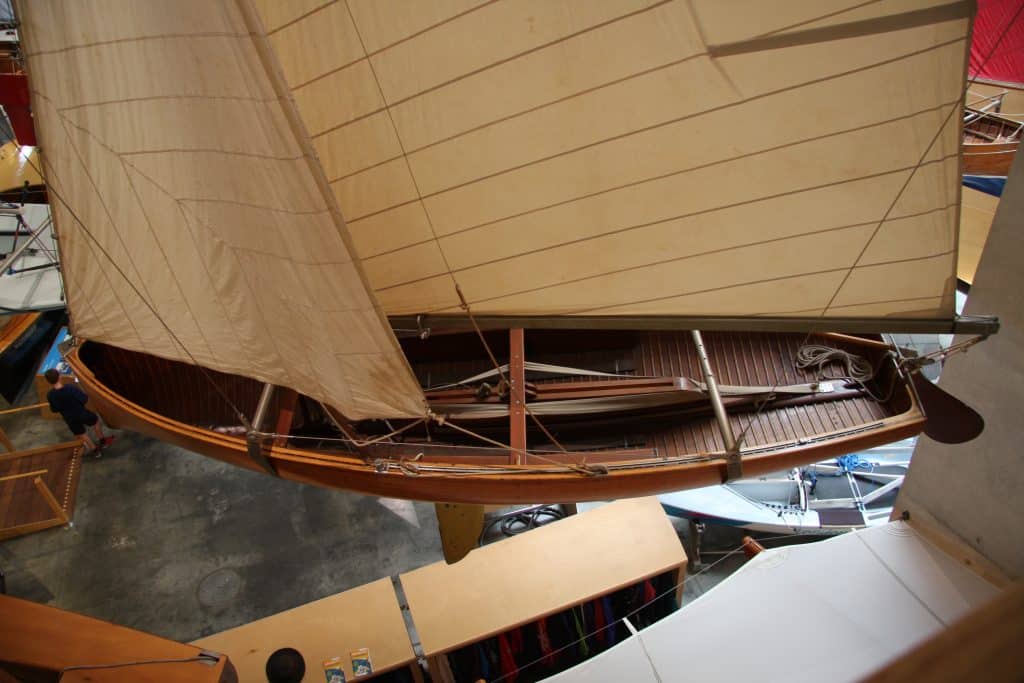 The origins of the International 14 class can be traced back to the early part of the 20th century, when the wealthy owners of steam yachts would race each other in their small dinghy tenders.

Together with other regional dinghies the class soon developed into the leading dinghy racing class up to WWII.

Uffa Fox started building 14s in 1923, and was designing them by 1925. He was to transform the class with the introduction of his first planing hull design, Avenger, in 1927. The construction and finish of his 14s was considered by many to be the ultimate in quality and craftsmanship, and Thunder and Lightning was no exception.

The hull was built of two thin veneers; diagonal internally and fore and aft externally, and stiffened by tiny rock elm frames, all fastened with thousands of copper nails. His aim was to achieve as light a construction as possible using the materials of the day – there was no carbon fibre or Kevlar then.

Thunder and Lightning was built in 1938 and, within a week of being launched, won one of yachting’s premier racing trophies, the Prince of Wales Cup, held that year at Falmouth. It was during this series that the boat’s owners, Peter Scott and John Winter, used a device now commonly known as the trapeze. At that time it was known as King George’s Jubilee Truss. The device was immediately banned by the Yacht Racing Committee on the grounds that it was unsporting and gave an unfair advantage to its users.

To rub salt into the wound, Scott and Winter were forced to write the rule banning the trapeze, which was not used in racing for another 15 years.

When Scott and Winter went to Canada aboard the liner Empress of Britain, the ship’s carpenter carried out some boat repairs for them. He presented each of them with a wooden black cat for luck, which can still be seen fixed on the inside of the stem of Thunder and Lightning.

The boat was presented to the National Maritime Museum by both Scott and Winter in 1989, together with the original leather trapeze belt.