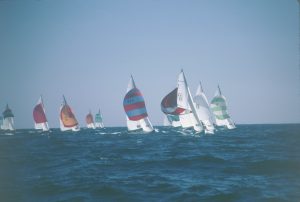 When Ian Proctor designed the Tempest it was clear from the outset that he was aiming at a breakthrough. The initial object, along with his eleven rivals, was to win the trials with the fastest boat which could be produced within the IYRU limits.

More than that, he wanted a boat that would be well behaved in a variety of sea conditions around the world, and which could be sailed efficiently by a crew of two, with a fair division of labour between crew members, so that neither would become unduly fatigued on a long race.

Proctor capitalised on his experience of sailing in, and design work on, development classes such as the International 14, Merlin Rocket and National 12. The rules for these high performance dinghies allow for a degree of continuous development and improvement, and Proctor used his knowledge to design, build and ultimately fine tune the Tempest. The result was a boat that is still held by many to be the fastest of its kind ever built.

The Tempest incorporates safety features such as a cockpit that drains at all angles of heel; a self-righting hull, and an under-deck area containing four separate buoyancy chambers. It is also self-righting in the event of a knock down.

In addition the boat’s steel fin keel, with lead ballast bulb, enters through a slot in the hull to be carried in a trunking, enabling it to be removed or raised by a jack. This enables the boat to be launched from shallow beaches or slipways, and allows for easy loading and transporting by trailer.

The success of the Tempest was nearly responsible for its downfall. The design became so popular that 60 builders applied for licences within a few months of the initial launch. The boats were being built in plastic by now, but, unable to cope with demand, the builders produced hulls of inferior quality, which led to many complaints.

Undaunted, Ian Proctor overcame this temporary setback, and soon the quality of his design showed through. So much so that in 1967 he received an award for the design of the Tempest from the Council of Industrial Design.

For reasons which are not altogether clear, but were perhaps partly political, the Tempest only made a showing at two Olympiads, 1972 and 1976, and was ultimately eclipsed by the Star Class. This was a considerable disappointment to Proctor, who went on to design a number of highly successful dinghies and cruising boats, as well becoming a household name for aluminium spars.  Nevertheless, the Tempest is now actively sailed and raced in over 21 countries, and Tempestuous, the first GRP Tempest, is in the Museum’s collection.