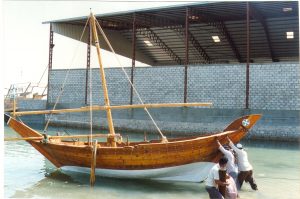 Small boats tend to be shaped by the lives of those who make and use them. so around the world vessels built for the same purpose differ greatly, due to the availability of materials and tools, traditional techniques and the unique local environments in which the boats are used.

This Kuwaiti Tishaala Dow, Tala, is based on a boat design that can be traced back centuries.

Tala is a type of dhow, a traditional Arab sailing vessel. Known as a ‘boom’, it is a double-ended vessel with a raking straight stem and straight, upright sternposts. More specifically, she is a type of boom known as a ‘tishaala’, and was designed to carry local cargo around Kuwait and across the Persian Gulf to Iraq. A Kuwaiti Dhow is traditionally rigged with the mast raking forward and a long lateen (triangular sail) yard. Dhow sails are not reefed, so when the wind gets up, the larger sail is unbent from the yard and a smaller sail is bent in its place. Most cargo-carrying tishaalas would be much larger and flat bottomed, carrying a crew of up to 30, however, Tala was designed for pleasure and sails extremely well.

Traditionally, a wooden dhow would be soaked in fish oil above the waterline to protect it from the sun and the sea; below the waterline it would receive a treatment of ghee (a type of clarified butter or rancid shark oil), and lime applied hot. The dhow is extremely customizable throughout the construction process. Since they are shell-built, shipwrights could create the vessel one plank at a time, and if a change to the design was requested, they could simply alter its shape or the angle. It is because of this that dhow building is often considered an art rather than a craft.

Tala’s keel was laid down in the mid 1990s by Haj Ali Abd al Rasool, a master shipwright who learnt to build dhows the traditional way from skills that had been handed down for generations. The sails were made by a retired Kuwaiti sea captain in the traditional Indian fashion, with a small rope in each seam between the cloths. To the western eye this would seem to ruin the air flow across the sail, but studies suggest that each rope causes eddies that may actually help performance. The entire vessel was constructed with the finest materials: the keel is made of Indian Laurel, the planks of Indian Teak and the frames from Jack Wood. Unfortunately, Ali passed away before he could finish Tala, but the work was completed by his cousin Hasan, also a skilled shipwright.

The origin of the term ‘dhow’ has been lost, possibly due to the fact that locals no longer use the word and simply refer to each dhow based on its type. Historically, dhows were used for sea-trading around Mesopotamia (Iraq, Jordan, Syria), India and South-west Africa, taking advantage of the seasonal change in the winds. These vessels would take dates and fish to East Africa and return home to the Persian Gulf with mangrove timber. Their captains would navigate this journey using a ‘kamal’; a traditional device which helped them determine their latitude by gauging the height of the Pole Star above the horizon. These vessels were making commercial journeys between the Gulf and East Africa under sail up until the 1960s.