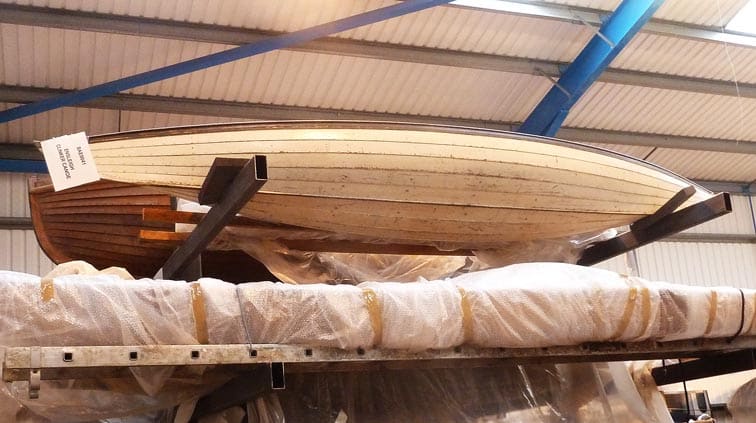 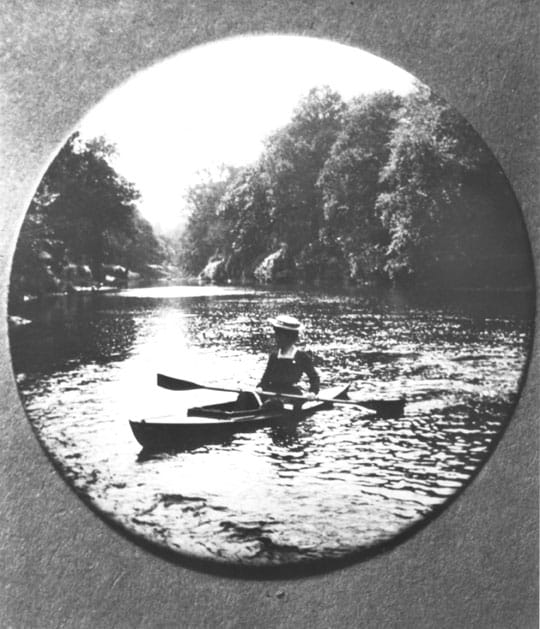 The origins of this image can be traced back to 1811 when the 6th Duke of Bedford commissioned the building of a fishing lodge and romantic gardens on one of the prettiest stretches of the River Tamar.

By the late 19th century the estate, Endsleigh, had come into the possession of the 11th Duke and Duchess of Bedford, who, mainly due to the fact that the Duke had been canoeing on the river since the age of 10, commissioned the building of 12 of these clinker-built canoes.

As one might expect the canoes were built to a very high standard, from strong oak to withstand the stones, and as narrow as possible, so as to be able to slip between the rocks; traces of gold leaf are still visible along the topsides. Principally the canoes were used to entertain guests, especially by the Duchess; Mary du Caurroy Russell (1865-1937), who would have the canoes transported to Greystone where she would then sail back to Endsleigh.

The river was extremely rocky, and best enjoyed in full flood, when there were thrills to be had. On the 5th June 1912 the Duchess recalled:

‘As the river was in flood, I shipwrecked handsomely on two occasions…the water was so cold that it took my breath away, and the current is too strong to allow of standing.’

On hot summer afternoons the Duchess would often take her guests on the 6 mile trip to Latchley, a journey that took about an hour and forty minutes (allowing for upsets and emptying of canoes). The canoes are often recalled as being ‘cranky’ although this apparently added to the fun! When the river was not high it was very difficult to avoid all the rocks and stickles and it was considered a pastime that required a great deal of skill. Often the Duchess was the only member of the party who got to the end of the day without capsizing.

Mary du Caurroy Russell was also known as ‘The Flying Duchess’ because of her skills as an aviator. She was a nurse, ornithologist, photographer and aviator. She was lost at sea, in her aeroplane on the 22nd March 1937.