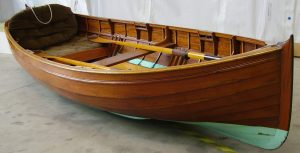 Small dinghies became fashionable on the Thames after the First World War. Compared to the traditional gigs and skiffs associated with Edwardian river outings, dinghies were lighter, handier, and easier to build.

Also, at a time when there were very few professional boatmen employed, they were more easily maintained by their owners, many of whom in the 1920s were building bungalows along the river complete with boathouses.

Katharine Louise is a fine example of the such types of rowing craft and was used for many years at Clifton Hampden. She was built by the very well known boat building co. of Turks of Cookham, probably around 1920, and is almost in original condition with very little restoration. It was rowed by two oarsmen with a pair of sculls and steered with a yoke with lines in the stern.