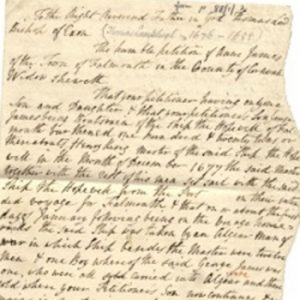 This is a mother’s letter to the Church requesting permission to petition the diocese for £60 needed to redeem her son whom had been captured at sea and enslaved in Algiers. This source can be found in a small envelope at the front of the Illogan Parish Register, 1539-1731. Alongside it is the reply from Thomas, Lord Bishop of Exeter, granting Anne permission for her request. It encapsulates the human element of piracy and highlights the strength and resilience of the Cornish throughout these events.

This 17th century letter dates back to an era when the seas were under threat from Barbary and Algiers pirates, who operated from Morocco and the north coast of Africa including Tunis and Tripoli. The letter is written by a Falmouth resident, Anne James, whose son was captured from aboard The Hopewell, on which he worked as a Boatswain. This was a growing problem for the residents of coastal towns and villages, as people were taken as readily as material goods when pirates raided ships. Some more brazen pirates would even come ashore to kidnap residents from the land, who would then be ransomed back, or sold and forced into slavery.

This topic is widely unknown in today’s romanticised version of Cornish history, where pirates are popularly imagined as swashbuckling lovable rogues; their eye-patches and peg-legs making them ideal candidates for children’s books; their ‘yo-ho-ho-and-a-bottle-of-rum’ attitudes turning them into Hollywood film characters. The truth however, is a tale more grisly, but a tale still worth telling. For example, Anne James in her letter refers to these pirates as ‘those barbarous enemies of Jesus Christ’.

The letter states that the ship was interrupted on its way home, by an ‘Algier man of war’ ship. George was then taken along with the rest of The Hopewell crew, including the Master, 12 men and one boy; all of whom were sold as slaves upon arrival in Algiers. If so many were captured from this one Falmouth ship, it begs the question: did any other mothers go to such lengths to see their sons returned? Perhaps the reason Anne went to such lengths can be found within the letter itself. Anne is described as a poor widow ‘whose comfort and livelihood depends on her said son’s welfare’.

Moreover, the letter also highlights the scale of the problem of capturing. We know from records of donations in the Falmouth Parish Register from the same period, that an alarming amount of people from Cornwall alone, were captured and taken to far-flung destinations, such as Salle, Algiers and Morocco; and that the Church made attempts to collect the sums of their ransoms. However, many Cornish captives would have remained in these countries, either as slaves or as converts to Islam.

The second letter in the register indicates that Anne was indeed granted permission to petition the Church, but whether the money was raised in full, or if George was ever returned remains to be established.

A number of documents relating to piracy in Cornwall on loan from the Cornwall Record Office will be on display during August 2013. This month’s Curator’s Choice has been guest curated by Bethany Partridge, a student of Exeter (at the Tremough Campus).

If you’ve enjoyed this Curator’s Choice you might also like Shipwreck Treasure: Pieces of Eight, Who are the Pirates?, A Packet Captain’s telescope, or Danger and Duty: The Lives of the Falmouth Packet crew

A bench’s tale
A lucky lady